The demonstrative impotence of the junta in the south-east leads to the final loss of these areas for the Ukrainian authorities and the very early collapse of the ruling regime. The widely announced antiterrorist operation is clearly undermined. The failure of its first stage became apparent already before the Easter holidays. The main reason was that, judging by the nature of their activities, the troops absolutely did not want to fight against their fellow citizens. Moreover, some units went over to the side of the protesters and transferred their military equipment and weapons to them.

Militants "Right Sector" proved to be bad warriors. Faced with armed resistance, they preferred to leave the battlefield. So far, the mercenaries from the American private military campaign (PMCs) have not shown themselves as real fighting force.

The obvious military impotence of the Kiev rulers against the background of the approaching economic catastrophe in the country and the strengthening of radical nationalism contributes to the growth of centrifugal tendencies not only in the south-eastern regions of Ukraine, but also in the west of the country - in Transcarpathia they announced the creation of their “people's republic” Rusyns. 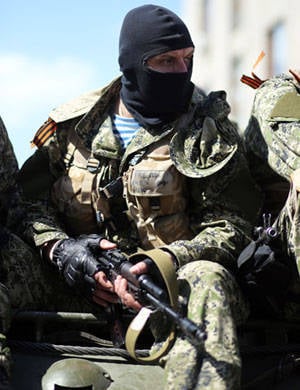 The second attempt to establish armed control over the south-eastern regions of Ukraine began immediately after the Easter holidays. In fact, it was reduced to one of the most striking episode, which was reflected in the press. This is an attack by a military group on Slavyansk.

The management at this stage was carried out by the Security Service of Ukraine (SBU). It should be remembered: according to the media, in the main building of the SBU in Kiev, an entire floor is allocated to accommodate a group of American CIA employees. So there is every reason to believe: they were the general leaders of this operation. This testifies to the lack of confidence of the current Kiev authorities in the officer staff of even the highest authorities of the Ukrainian power structures.

About 11 thousand people were involved in the operation, about 160 tanks, 250 armored combat vehicles and up to 150 field artillery guns. At the same time, no facts of combat employment of these significant forces were recorded. In the only combat clash, no more than 100-150 people attacked in light armored personnel carriers supported by three helicopters, and this collision ended in nothing - the attackers retreated. This suggests one thing: the command cannot throw parts of the army into battle against the people, fearing that, like the 25th brigade, they will go over to the side of the protesters or disarm, passing them weapon.

In addition to Slavyansk, no other city in the south-east of Ukraine, controlled by supporters of federalization, has not been attacked - the junta does not have enough troops loyal to it to act simultaneously in several directions.

The next day after the first battles on the outskirts of Slavyansk, the leaders of the antiterrorist operation announced that the main goal of the next actions was to ensure the blockade of this city. However, the blockade to force the city to surrender in modern conditions is very problematic. And the delay in solving the problem of Slavyansk is extremely dangerous for the junta - the contacts of the main body of troops with the local population, especially in conditions when this population also feeds the military, deprived of adequate food supply, will lead to the final demoralization of units and divisions with a possible transition of some of them on the side of the protesters.

Yes, and Slavyansk protests far from one. Other cities of the southeast, assisting him, themselves increase the potential of their own defense. Thus, in Kramatorsk, the Novokramatorsk Machine-Building Plant handed over to the self-defense forces several fencing machines to destroy the minefields installed by the junta troops around Slavyansk. These are powerful combat vehicles created on the basis of heavy armored tanks. That is, the process of recognizing the authorities formed by the protesters and equipping self-defense forces with modern military equipment is underway. The design of a single political center of protest regions of the southeast will go faster. Time is working against the junta and not much is left of it.

Against this background, the passivity of the Ukrainian troops means one thing - the complete collapse of the antiterrorist operation without any possibilities for its resumption on a more or less serious scale (small sorties do not count). The reasons for the failure are obvious: the lack of proper training, first of all groupings of forces capable of establishing control over the southeastern regions, as well as the apparent lack of reasonable operational tasks — capturing Slavyansk does not allow even the first declared goals of this operation to be achieved. That is, in the very idea of ​​the junta’s anti-terrorist operation, there is no real operational or political meaning. Rather, it is a manifestation of the state of extreme stress in which the Kiev leadership remains, and an obvious demonstration of its very low intellectual potential. They do not have sufficient forces in Ukraine and the United States to conduct effective operations.

What junta can do

What can we expect in the near future? It is very difficult to predict the actions of people in a state of panic: they are limited in their ability to rely on logic dictated by objective circumstances. However, possible actions (in any case objectively necessary) can be assumed.

In the coming week, the main efforts of the Ukrainian authorities are likely to be focused on creating the necessary force groupings. The main task will be the formation of such militarized formations that would be able to disorganize and neutralize the self-defense forces of the southeast and the protest created by the protest population by force of arms, preventing their legitimization in any form. The basis of such formations can be mercenaries of American PMCs, as well as a number of former militants of the Right Sector and other paramilitary organizations of euromaidan from among those who can be put into operation.

At the same time, it is very possible to covertly deploy in Ukraine several sabotage groups from the special operations forces of the US armed forces. They will be necessary to solve special problems (such as the elimination of individual leaders of the protest movement of the southeast, committing sabotage to disorganize self-defense forces and demoralize the population) and organize interaction with regular troops and forces fleet USA and NATO if necessary. Probably, it was in this connection that the American combat swimmers arrived in the Black Sea and took part in the maneuvers.

In the information and political sphere, the main efforts in the internal field of Ukraine will be aimed at creating a favorable information environment to calm the population of the southeast. At the same time, statements on the recognition by the Kiev junta of some popular leaders of the south-east, their powers, without any practical content, are possible. Unsecured promises in the socio-economic sphere will be given, and other steps will follow, aimed at forming a new, more favorable image of usurpers in the eyes of the population of the south-east of Ukraine.

In the interests of neutralizing Russia, an active information policy will be pursued aimed at shaping from our country an image of an enemy for Ukrainians and an aggressor for the population of Western countries. At the same time, the most active measures will be taken to intensify the “fifth column” in the territory of the Russian Federation itself. In the interests of intimidating the Kremlin, a demonstrative build-up of the grouping of the armed forces of NATO and the United States at the western borders of Ukraine and in the Black Sea is possible.

At the same time, the most active actions will be taken to prepare a new wave of sanctions against Russia, including negotiations with leaders of the European Union countries with the aim of forcing them to join these sanctions even at the cost of substantial losses for their economies.

In any case, in the beginning of May we can expect a new stage of active actions, the main goal of which will be the disruption of the regional referendum on federalization in the southeast, the disorganization and neutralization of the self-defense forces of the rebel regions. The main content of this period will be the physical liquidation of the leaders of the resistance of the south-east, local acts of intimidation against the protesting population, possibly with bloodshed.

With regard to Russia, during this period, a particularly powerful information campaign will be launched with demonstrative maneuvers of sufficiently powerful groups of NATO troops and forces in order to prevent its intervention in the situation in Ukraine. It is very likely that local “riots” will initiate local mass riots in the Russian territory. At the same time, in case of an attempt by the Russian Federation to prevent the use of force in the south-east of Ukraine, new economic sanctions will be applied against our country.

If the goals of the suppression and disorganization of the protesters are not fully achieved, the course will most likely be set to unleash a civil war to justify the introduction of NATO troops into Ukraine. This option is very likely, since the state of Kiev-controlled troops and forces, their own insignificant organizational capabilities, the insufficient composition of the US forces in Ukraine and the difficulties in covertly building up their group will not allow a full-fledged operation to regain control over the southeast. Possible sporadic, local, poorly coordinated and secured actions that do not allow to achieve any positive result for their organizers. The apparent impotence of the junta will lead the population and business to consider the authorities formed by the protesters as the only real ones in this region. This will mean the final loss of these areas for the junta and its very early collapse.

Ctrl Enter
Noticed oshЫbku Highlight text and press. Ctrl + Enter
We are
Once again on the PMCs: let's talk about the nuances“PMCs are a very effective instrument of influence”
Military Reviewin Yandex News
Military Reviewin Google News
63 comments
Information
Dear reader, to leave comments on the publication, you must sign in.