22 2013 June
129
The PPSH-41 submachine gun is not just the well-known (at least outwardly) machine gun from the times of the Second World War, which habitually complements common images of the Belarusian partisan or Red Army man. Let's say otherwise - in order for all this to be so, it was necessary in time to solve a number of very serious problems. 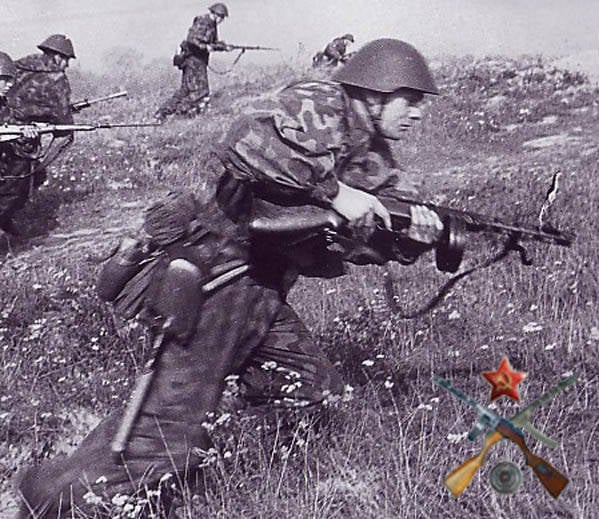 Every kind weapons forms and tactics of its application. At a time when a submachine gun was created in the USSR, the main and only weapon of an infantryman was a magazine rifle. Since the invention of gunpowder until that time, despite the proliferation of machine guns and the use of automatic rifles (tactically facilitated replacement of the same machine guns), despite the perfection of magazine rifles - in the hands of a soldier continued to be a weapon, leading only a single fire. These are hundreds of years of a single-shot rifle and dozens of years of a rifle In this system, the concept of the device and tactics of the use of the machine gun in the infantry is to some extent comparable with the ideas of the fourth dimension.

Submachine guns appeared at the end of the First World War. Due to the lack of ideas about the most advantageous tactics of using a new type of weapon, the shape of the submachine guns to the magazine rifles — the same inconsistent butt and wooden box, and the weight and dimensions, especially when using large-capacity drum shops — did not assume that maneuverability, which submachine guns purchased later. 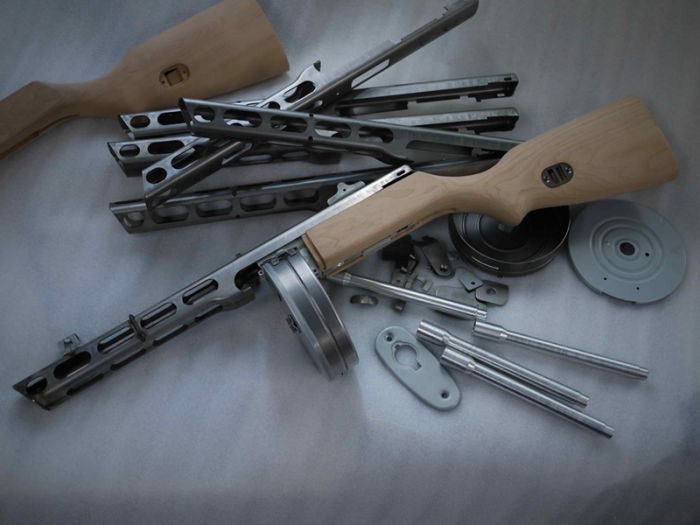 The idea of ​​a submachine gun is to use a pistol cartridge for automatic firing in an individual weapon. The low power of the cartridge, in comparison with the rifle, allows you to implement the most simple principle of the automation - the return of a massive free gate. This opens up the possibility to make weapons exceptionally simple both constructively and technologically.

By the time PPSH was created, a number of fairly sophisticated and reliable samples of submachine guns already existed and were distributed. These are the Finnish submachine gun Suomi systems of A.I. Lakhti, and the Austrian Steyer-Solothurn C I-100 designed by L. Shtange, and German Bergman MP-18 / I and MP-28 / II designed by H. Schmeisser, American pistol Thompson machine gun and our Soviet submachine gun PPD-40 (and its early modifications), produced in small quantities.

With an eye on the foreign policy of the USSR and the international situation, it is clear that the need to be armed with a modern sample of a submachine gun, albeit with some delay, was also overdue in the USSR.

The PPSh submachine gun was developed by the designer G.Shpagin in 1940 and was tested along with other samples of submachine guns. According to the test results, the PPSH submachine gun was recognized as the most satisfying of the set requirements and recommended for use. Under the name "7,62-mm submachine gun GS Shpagin sample 1941 g." It was put into service at the end of December 1940. As pointed out by D.N. Bolotin ("History Soviet small arms "), the survivability of the Spike-designed specimen was tested by 30 000 shots, after which the PP showed satisfactory firing accuracy and good condition of the parts. The reliability of the automatics was checked by shooting at elevations and declination in 85 degrees, with an artificially dusty mechanism, with no lubrication (all parts were washed with kerosene and wiped dry with rags), shooting 5000 cartridges without cleaning the weapon. All this allows you to judge the exceptional reliability and non-repudiation These weapons along with high combat qualities. 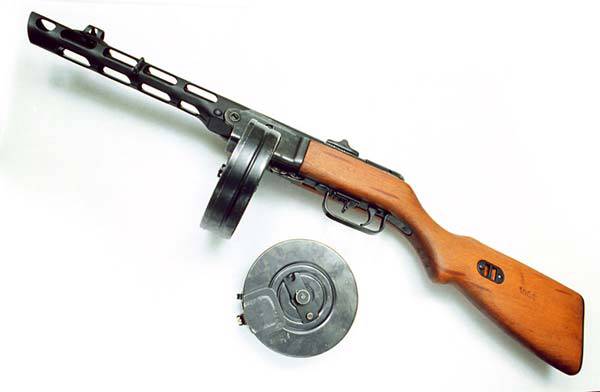 At the time of the creation of the PPSh submachine gun, the methods and technologies of stamping and cold working of metals were not widely used. However, a significant percentage of PPSH parts, including the main ones, was designed for manufacturing by cold stamping, and individual parts - by hot stamping. Thus, Shpagin successfully implemented the innovative idea of ​​creating a stamped-welded machine. The PPSH-41 submachine gun consisted of 87 factory parts, while there were only two threaded places in the machine gun, and the thread was a simple fastener. Part processing was required with a gross release of 5,6 machine-hours. (The data are given from the table of technological evaluation of submachine guns, placed in the book by D.N. Bolotin "The History of Soviet Small Arms").

In the design of the PPS submachine gun there were no scarce materials, there were not a large number of parts requiring complex processing, and seamless pipes were not used. Its production could be carried out not only at military factories, but also at any enterprises that have simple press-stamping equipment. This was the result of that simple principle of action, which allows for the implementation of a submachine gun, on the one hand, and a rational design solution, on the other.

Structurally, the PPS submachine gun consists of a barrel and a bolt box connected by a hinge, and in an assembled machine locked by a latch located in the rear of the receiver, a trigger box located in the box under the bolt box, and a wooden box with a butt.

The barrel is placed in the receiver, the muzzle of which extends into the hole of the barrel guide in front of the receiver, and the breech block passes into the hole of the liner, where it is pinned with the hinge axis. The receiver is at the same time the barrel casing, and is provided with rectangular cutouts for air circulation, cooling the barrel during firing. In front of the oblique sheath cover is covered with a diaphragm with a hole for the passage of the bullet. Such a device front of the casing serves as a muzzle brake-compensator. Powder gases, acting on the inclined surface of the diaphragm and flowing up and to the side through the cut-outs of the casing, reduce the recoil and reduce the stem up.

Barrel submachine gun PPSH - removable and can be separated with the complete disassembly and replaced by another. In the bolt box placed a massive bolt, tucked return-combat spring. In the back of the box there is a fiber damper, softening the blow of the bolt in the rearmost position when firing. A simple safety device is mounted on the bolt handle. It is a slide that moves along the handle and can go into the front or rear cut-outs of the receiver and, accordingly, close the bolt in the forward (traveling) or rear (cocked) position.

Initially, a 71 drum cartridge cartridge was adopted for the PPSH submachine gun. The store consists of a magazine box with a lid, a drum with a spring and a feeder and a rotating disk with a spiral crest - a snail. On the side of the store there is an eyelet, which makes it possible to carry stores on the belt in the absence of bags. Cartridges in the store are placed in two streams, on the outer and inner sides of the coil of a cochlea. When feeding cartridges from an external stream, the cochlea rotates with the cartridges under the action of a spring-loaded feeder. The cartridges are removed at the same time by the bend of the box located at the receiver, and brought to the receiver, to the dismounting line. After the outflow of the outer creek is exhausted, the rotation of the cochlea is stopped by the stopper, while the output of the inner creek is combined with the receiver window, and the cartridges are squeezed out of the inner creek by a feeder, which, without stopping its movement, now begins to move relative to the stationary cochlea. 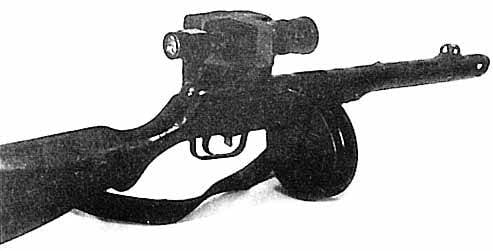 To fill the drum shop with cartridges, it was necessary to remove the magazine cover, start the drum with a feeder two turns and fill the snail with cartridges - the 32 cartridge in the inner stream and the 39 in the outer one. After that, release the locked drum and close the store cover. There was also a simple device to speed up the equipment store. But all the same, as can be seen from the description, the equipment of the store, in itself not difficult, was a long and difficult task in comparison with the equipment of the now popular box stores. In addition, with a drum shop, the weapon was quite heavy and bulky. Therefore, during the war, to the PPSh submachine gun was adopted, along with the drum one, a much simpler and more compact box-like sector magazine with the capacity of 35 cartridges.

Initially, the PPSh submachine gun was equipped with a sector sight, designed for shooting, at a distance of 500 m, cut into every 50 meters. During the war, the sector sight was replaced by a more simple flip-flop entirely with two slots for firing at 100 and 200 m. The experience of military operations showed that this distance is quite sufficient for a submachine gun and this sight, simpler in design and technologically, does not reduce combat qualities of weapons.

PPSH-41, modification with a curved barrel and box magazine on 35 cartridges

In general, during the war, in conditions of mass production, with the release of tens of thousands of PCA monthly, a number of changes were consistently introduced into the weapon design, aimed at simplifying the production technology and making the design of some components and parts more rational. In addition to changing the sight, the design of the hinge was also improved, where the pin was replaced with a split spring tube, which simplified the mounting and replacement of the barrel. The store's latch has been changed, reducing the likelihood of accidentally pressing it and losing the store.

The PPSh submachine gun proved itself so well on the battlefields that the Germans, who widely practiced the use of captured weapons in general, from rifles to howitzers, readily used the Soviet machine gun, and, sometimes, German soldiers preferred the PPSh to the German MP-40. The PPSH-41 submachine gun, used without constructive changes, had the designation MP717 (r) ("r" in brackets means "russ" - "Russian", and was used with reference to all captured models of Soviet weapons). 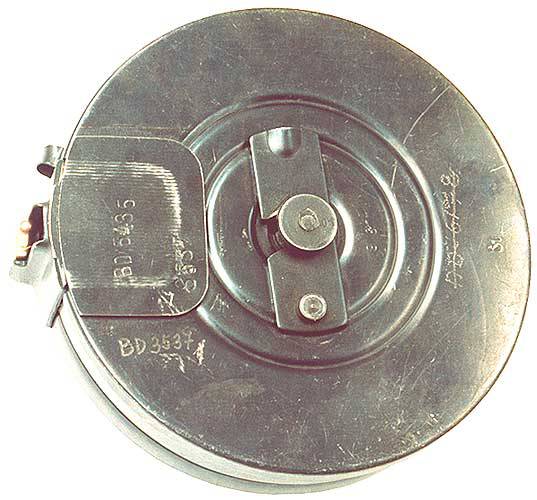 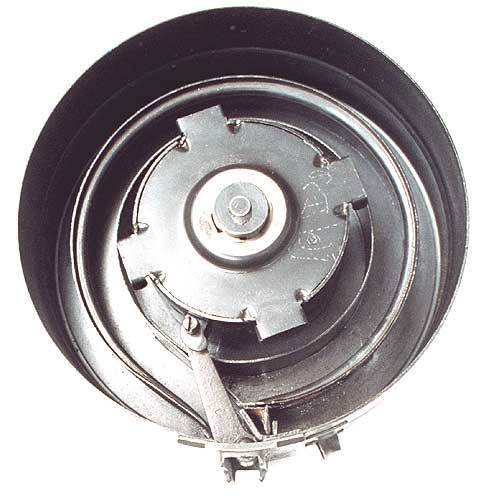 Drum magazine on an 71 cartridge disassembled

The PPSh-41 submachine gun, becoming the second consumer of pistol cartridges after the TT pistol, demanded not only an immeasurably greater release of these cartridges, but also the creation of cartridges with special types of bullets that are not required for a pistol, but are not necessary for a submachine gun. a policeman, and a military sample. Along with the cartridge developed earlier for the TT pistol with an ordinary lead core (P) bullet, armor-piercing incendiary (П-41) and tracer (ПТ) bullets were developed and put into service. In addition, at the end of the war, a cartridge with a bullet with a steel stamped core (Pst) was developed and mastered in the production. The use of a steel core, along with saving lead, increased the bullet penetration effect.

Due to the acute shortage of non-ferrous metals and bimetal (steel clad with tampacom) and the growing needs of the army in ammunition, the release of cartridges with bimetallic and then completely steel, having no additional coating, was established during the war. Bullets were produced mainly with a bimetallic shell, but also with steel, without coating. The brass sleeve is designated "hl", bimetallic - "GJ", steel - "gf". (At present, in relation to machine gun and rifle-machine-gun cartridges, the abbreviation "gs" denotes a steel lacquered sleeve. This is a different type of sleeve.) The full designation of the cartridges: "7,62Pgl", "7,62Pgj", etc. 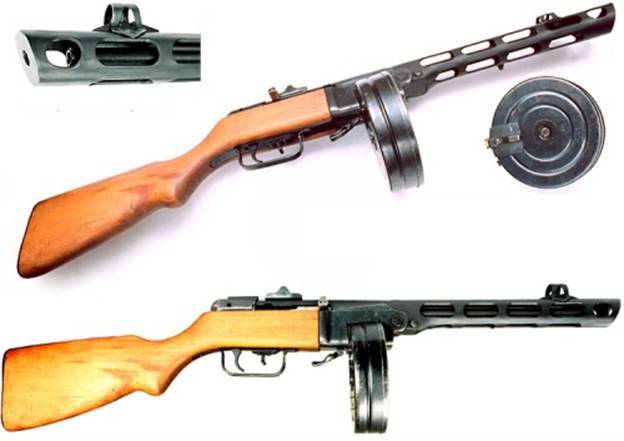 PPSH-41 with drum magazine on 71 cartridge