Seven hundred Islamists were sentenced to death in Egypt

April 29 2014
29
As the business newspaper "Vzglyad", the fugitive leader of the Muslim Brotherhood movement, Mohammed Badi, was sentenced in absentia. Also, the death sentences were also made 683 Islamists by the court of the Egyptian province of El Minya. 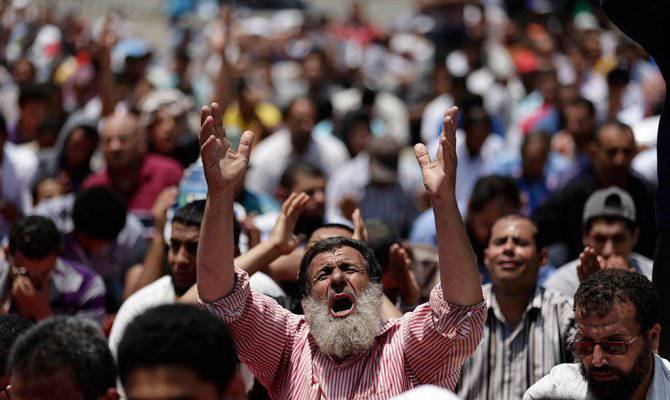 According to the Business newspaper “Vzglyad”, the fugitive leader of the movement “Muslim Brotherhood” Mohammed Badi was sentenced in absentia. Also, the death sentences were also made 683 Islamists by the court of the Egyptian province of El Minya.

Moreover, this is not the first time that mass convictions have been passed against members of the Muslim Brotherhood organization. One and a half months ago, more than five hundred activists were sentenced to death penalty for killing police officers, inciting riots and violence. Currently, the sentence against 37 people has already been carried out. Recall that these events took place in Egypt after President Mursi was overthrown by the military.

The former president was then charged, closely related to the 2011 revolution of the year. Mursi was found guilty of organizing attacks on prisons that led to numerous deaths of prisoners, military and police.

Recall that the events that occurred at the beginning of 2011 on Tahrir Square in Cairo, when President Hosti Mubarak, who had been ruling in Egypt for several decades, lost his power, was exemplary for some time a “transition from dictatorship to democracy.” However, it soon became clear that instead of democracy in the country came chaos. For almost two years, the junta in the person of the Supreme Council of the Armed Forces (AFFA) was in power.

At the same time, the liberal and moderate forces led by Mohammed al-Baradei were pushed aside by Islamic fundamentalists. It was then that the Muslim Brotherhood left the underground, the activities of which were banned as early as 1954 in the year of the assassination attempt on Gamal Abdel Nasser.

Moreover, in the parliamentary elections in December 2011, this organization won 40 percent of the vote, thereby becoming one of the influential political forces in the country. And after six months, the military handed over power to the nominee from the Islamists, who won the presidential election of Mohammed Mursi.

However, after the frequent clashes between opponents and supporters of the Islamists, a year later the army regained its power. Last July, the overthrow of Mursi was announced, and the Muslim Brotherhood organization was once again banned.

As Viktor Nadein-Rayevsky, a specialist of the Institute of World Economy and International Relations of the Russian Academy of Sciences, said in an interview, news on the sentence of seven hundred "Muslim Brotherhood." It was from this organization that the main danger of terrorism always emanated. In addition, once taking power into their own hands, they will try to do it again: with the help of electoral fraud and banning their political opponents. For this reason, it is no use waiting for radicals to abide by the norms of Western democracy.

The expert explained that you should not hope for politically adjusted actions within the law. And although, in terms of Western democratic forms, there are many violations, nevertheless, the Egyptian government does everything within its framework of its understanding of Islamic peculiarities and what various organizations are.

The Russian specialist is confident that actions against the Muslim Brotherhood can be condemned in the West, since they do not always understand what to expect when Muslims come to power. Meanwhile, in Egypt, they remember well how, after the Algerian elections, the civil war claimed the lives of tens of thousands of citizens, so the military is trying to toughen measures against the Islamists. Moreover, after the overthrow of Mursi, the radicals are preparing to conduct the next Islamic revolution in the country.
Ctrl Enter
Noticed oshЫbku Highlight text and press. Ctrl + Enter
We are
Egyptian choice: between military secularism and religious fundamentalism
Military Reviewin Yandex News
Military Reviewin Google News
29 comments
Information
Dear reader, to leave comments on the publication, you must sign in.