April 30 2014
68
In early April, the leadership of the United Aircraft Corporation (UAC) recalled its plans for the construction of multi-purpose fighter Su-35С. The works are proceeding in accordance with the schedule, due to which the existing contract for the supply of such aircraft to the 48 air force will be completed on time. The last batch of fighters under the current contract will be transferred to the customer in 2015 year. 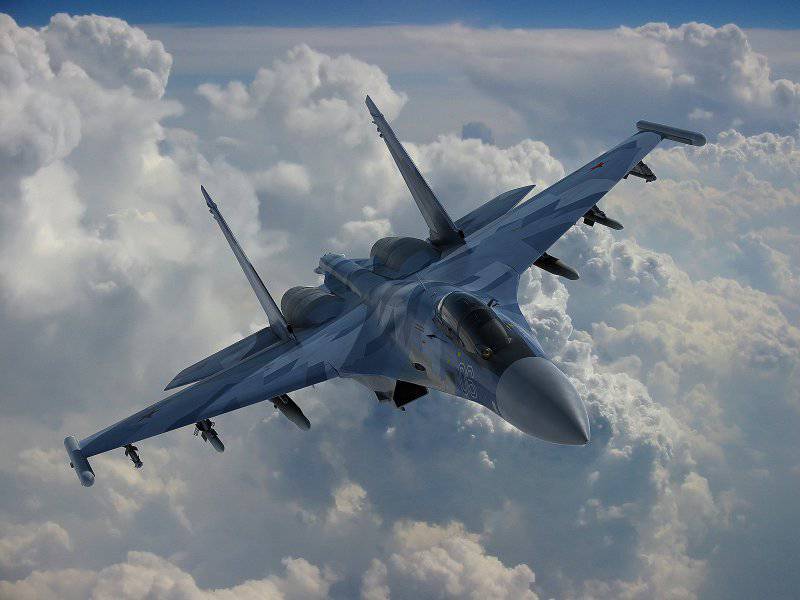 In early February of this year, the troops were handed over 12 fighters Su-35С, built in the past 2013 year. Until the end of 2014, it is planned to build, test and transfer to the military even 12 aircraft. In 2015, the military will receive the last batch of aircraft under the current contract. Next year, the KLA will transfer 14 airplanes. By the end of 2013, the troops already had 10 Su-35С aircraft. The implementation of existing plans will allow by the end of next year to bring their total number to the required 48.

The contract for the supply of X-NUMX fighters Su-48 was signed in the summer of 35, at the international aerospace show MAKS-2009 in Zhukovsky near Moscow. Shortly after the signing of this document, information appeared on the future plans of the Ministry of Defense regarding new equipment for the Air Force. It was argued that after the delivery of the Su-2009S serial fighter jets, a second contract could be signed, according to which the KLA would build the same number of aircraft. For obvious reasons, until recently, such a contract was only a matter of discussion.

Now, the approximate dates for the appearance of such an agreement have become known. According to ARMS-TASS, the contract for the supply of the following 48 Su-35C fighters will be signed at the end of 2014 of the year or at the beginning of 2015. The construction of new aircraft will be conducted until about the end of this decade. Thus, thanks to two contracts, the total number of Su-35C fighters in the troops will reach 96 units, which will accordingly affect the capabilities of the Air Force.

After completing the two contracts, the Su-35S will become one of the largest fighters in the Russian Air Force, second only to the Su-27 and MiG-29 and their modifications. It should be noted that, in terms of their characteristics, new aircraft surpass the existing technology and, therefore, the lag in quantity can be compensated by a qualitative superiority. As a result, the air force will be able to seriously upgrade its fleet of equipment, both in quantitative and qualitative terms.

As follows from the current plans for the development of the air force, the Su-35С fighter is intended to become a “transitional link” between the available technology and the promising T-50 aircraft. This feature of the fighter is reflected in its classification: Su-35С belongs to the generation of 4 ++. This means that it meets some of the requirements for the fifth generation, although it is a development based on the projects of the previous generation.

The Su-35S aircraft was created based on the developments of previous projects of the Su-27 family, however, it has a number of serious differences. During the creation of a new fighter, most of the units taken as a basis were seriously changed. In addition, this fighter uses a large number of new components and assemblies. The processing of the airframe design allowed not only to preserve its aerodynamic properties, but also to improve its performance. The declared airframe resource is 6 thousand hours, which corresponds approximately to 30 operating years.

On the Su-35С two turbojet engines AL-41Ф1С are installed with afterburner for 14000 kg. An important feature of these engines is the thrust vector deflection system. The engine nozzle can change the direction of the thrust vector within ± 20 ° from the longitudinal axis of the engine. According to reports, the engine AL-41F1С has a greater resource in comparison with other engines. The total engine life is 4 thousand hours, between-repairs - 1 thousand hours.

Su-35S fighter is equipped with modern electronic equipment. A key component of the avionics is a radar H035 "Irbis", equipped with a passive phased antenna array. To observe the surrounding space and search for targets, the aircraft also carries the OLS-35 optical-electronic system. All the necessary information is displayed on two multifunctional color liquid-crystal screens and the HUD in the cockpit.

On the external suspension, the Su-35C can carry up to 8 tons of various weapons. On the 4, the ventral and 8 wing pylons can accommodate missiles and bombs of various types. The aircraft is able to use all existing domestic guided and unguided ammunition. There is a built-in automatic gun GSH-30-1 caliber 30 mm.

The term “35 ++ generation” was introduced by experts to designate the Su-4C fighter. On the set of characteristics, this aircraft cannot be considered a representative of the 5-th generation of fighters. At the same time, its capabilities are significantly higher than those of the 4 and 4 + fighter generations. In this regard, it was necessary to introduce into circulation a new term.

Taking into account the aircraft transmitted in early February, the total number of Su-35C in the air force at the moment is 22 units. 12 fighters serve at Dzemgi airbase in Komsomolsk-on-Amur. New fighters will also arrive in the Air Force combat units. By the end of next year, the total number of Su-35С in the Air Force will reach the planned 48 units, after which, apparently, the construction of new equipment of this type will begin.