Kiev. Water for the Crimea?

April 30 2014
189
For almost a quarter of a century, Ukrainian politicians, especially those who positioned themselves or are positioning themselves adherents of “democracy and glasnost”, supporters of European values, methodically instilled into the heads of ordinary Ukrainians the thesis that Ukraine is a country that experienced the horror of the “famine” the fault of the authorities of the USSR (read - Russia).


In 2006, the Verkhovna Rada adopted a law at all, according to which the Holodomor was recognized, as much as the genocide of the Ukrainian people, during which (“genocide”) no less than 8 of millions of Ukrainians died.

From TSB. Genocide is the extermination of certain groups of the population for racial, national or religious reasons, one of the most serious crimes against humanity. G.'s crimes are organically linked with fascism and similar reactionary "theories" that promote racial and national hatred and intolerance, the rule of the so-called. "higher" races over "lower", etc.

So, “8 of millions exterminated against the background of national hatred” ... Such statistics were presented at the meeting of the Rada by the chairman of the Institute of National Remembrance of Ukraine, Mr. Yukhnovsky. The same law introduced administrative responsibility for the denial of the famine. The authors, calling the 30's tragedy in Ukraine a genocide, did not deign to spread especially, that at that time famine claimed a huge number of human lives not only in Ukraine. Famine suffered from Russia, Belarus, Kazakhstan, the republics of Central Asia. What kind of "nation" so hated another nation to "arrange" a widespread hunger? Kiev knows ...

Accents were made precisely on the "genocide of Ukrainians." What is the purpose? The goal is one — first, the work of a propaganda machine, in which a program was laid about “the cruelty and bloodthirstiness of Russians who squeezed all the juices out of gullible Ukrainians,” then the disunity of the people with common roots. Now, isn't it happening in Ukraine ...

But if the Holodomor 30-x is a genocide like that, then, excuse me, today the Kiev pseudo-authorities — the ones who continue to insist on the Holodomor as the targeted destruction of the Ukrainian nation — suit the peoples of Crimea? If in the 1932-1933 year, to Ukraine, “someone” brought famine, then, obviously, in the year 2014, the Kiev junta brings to the Crimean land its no less monstrous analogue. Let's call it "waterhome". Exaggeration? Not at all. After all, the Kiev decision related to the actual blocking of water supplies through the North-Crimean canal to the peninsula is a crime against humanity, which we are witnessing today. It is difficult to find analogues in the modern world, when the wishes of political dictates regarding people were based on depriving these very people of a vital resource. The Kiev junta decided that depriving the water supply of hundreds of thousands of people was an option for “relations” with its neighbors ... 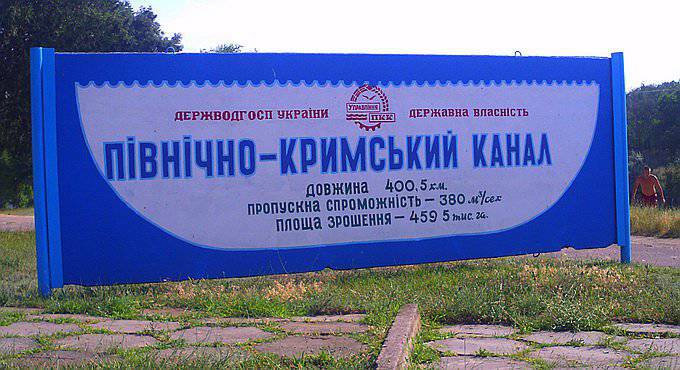 The journalists of the Russia 1 channel were right, saying that the situation in which Moscow is trying to give Kiev time to pay its gas debts, in order not to switch to the prepaid system, against the backdrop of a twisted-off valve to supply water to the Crimea, is simply absurd. Depriving people of one of the most important components of life itself — water — is a decision that only sophisticated barbarians could make. But someone else continues to firmly believe that the presence of the Nazis in the Ukrainian capital is the story of Putin’s propaganda.

So, the water supply of the peninsula through the North-Crimean Canal (SCC) by Ukraine today has been reduced by more than two dozen times. These volumes of water are clearly not enough to fully cover the needs of the Crimea in fresh water, including in terms of agriculture. Numerous agricultural firms engaged in the cultivation of vegetables, rice, grapes, were threatened with bankruptcy. The chain is simple: water shortage - drought - crop failure - financial losses - the threat of the elimination of the economy. This chain, with the exception of the last points, is identical to the one that describes the causes of the famine in 30's throughout the USSR. Only if then drought has become a natural phenomenon, now a single junta can organize a drought, trying to show its “power”. Of course, no one is going to talk about the threat of “starvation deaths” in the Crimea due to the overlapping of water from the Dnieper River - just now it’s not that people are faced with such a threat. But the fact that hundreds of farms may be on the verge of survival is more than real. How realistic and the fact that there is a criminal order by the Maidan junta.

Historically, the Crimea has always been dependent on water from the “mainland”. If there were no problems with water in the mountainous areas of the Crimea, in places located in close proximity to local freshwater bodies of water, then in that part of the Crimea, which is represented by a flat landscape, problems appeared repeatedly before the appearance of the canal. And although there are a lot of wells throughout the flat part of the Crimea since the time of the Russian Empire, they are not capable of providing full-fledged water supply to this territory.

The only opportunity to obtain sufficient water resources for farming is currently in the northern and northeastern parts of the peninsula - the use of the Dnieper water. Dnieper water first went to the Crimea "on its own" in the autumn of the year 1963. In 1975, the channel was extended to the city of Kerch, located in the east of the peninsula. The total length of the channel today is about 402 km. 4 large pumping stations operate throughout the canal. The first is in the town of Tavriisk (Kherson region, Ukraine), the second is the Victory (Republic of Crimea, Russia), the third is Soviet (Republic of Crimea, Russia), the fourth is Green Yar (Republic of Crimea, Russia). The main problems that are observed today with water supply in Crimea are connected with the territories that are located between the border of Ukraine and the Sovetskoye pumping station. The further route of the canal is already filled with the waters of the Crimean reservoirs, which reduces the dependence of the eastern part of Crimea on the Dnieper water (the waters of the Kakhovka reservoir), which Kiev clearly “played,” preferring to drain it into the Black Sea instead of supplying people. 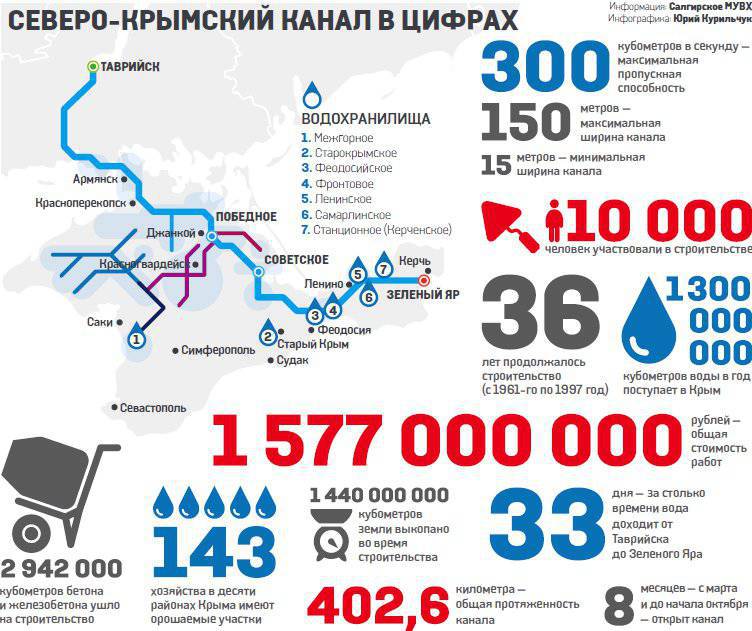 A couple of months ago, our readers paid attention to the fact that the Kiev self-proclaimers could begin to put pressure on the Crimeans precisely by means of the “gate” of the North-Crimean Canal. Unfortunately, today these concerns are confirmed. At the same time, self-proclaimers in the power of Ukraine, using their usual tactics, manage even here to lie and not blush. Representatives of the junta say that no one in Ukraine does not cut off water for the Crimea, and supposedly the whole thing is the “illiteracy” of the Crimean authorities. They say that Aksyonov himself does not start pumping stations at full capacity, which leads to the fact that water from the canal does not go at the same pace ... If we take into account that against this background, Kiev was engaged in disconnection of the peninsula from electricity, then reflections on the topic of "Simferopol's guilt" in the “non-use of pumping station capacities” they look like an outspoken Kiev cynicism, to which everyone has already begun to get used to and draw their own conclusions.

However, all attempts by the junta to cut off the Crimea from the water supply from the Dnieper through the CCM only lead to the fact that the Crimea is looking for and finding alternative water supply options for its lowland areas. One of these options is to reduce channel water losses when using local reservoirs. The second is the desalination of those artesian waters that have a low salt content. The third is the release of the so-called freshwater lenses, which were left as a reserve about 30 years ago. In the coming years, RusHydro is going to implement such projects, as reported by Kommersant.

But the implementation of these projects (and I would like to hope that they are being implemented without excessive red tape) should not give a reason to forget about the crime that the Maidan gathering in the power of Ukraine is committing towards the peoples of Crimea. Let's not forget that in the Crimea about a third of the population are people who, during the census, called themselves Ukrainians.

Ctrl Enter
Noticed oshЫbku Highlight text and press. Ctrl + Enter
We are
Energy blockade of the Crimea. Great damage to the economy and an attempt to genocide the populationYanukovych and the topic of the famine in Ukraine: the government is different - the ideology is the same
Military Reviewin Yandex News
Military Reviewin Google News
189 comments
Information
Dear reader, to leave comments on the publication, you must sign in.