West is afraid to destroy Russia? 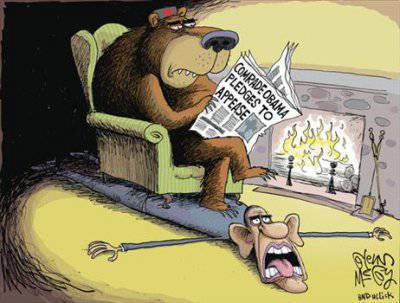 Kim zigfeld of "American Thinker" discovered in Russia not one, but a whole multitude of Achilles toes. This very set was even rendered in the headline of the article: “Russia's Achilles Heels (Plural)”


Every time, the journalist notes, when the terribly dubious foundations of the Russian economy are pointed out to his apologists, they respond the same way.

"Russia has a small debt and large reserves, so it can withstand any storm," they chant, and the anthem of the USSR can serve as a background to their words.

Kim Zigfeld does not believe that such arguments are true. Moreover, in her opinion, low debt and large reserves are the main “Achilles heels” of Russia. All this will destroy Russia in Ukraine.

Just last week, Russia fell into an economic storm. Its stock market reeled: it lost more than 5% of its value. The US Treasury Secretary said that the United States will keep in mind the personal assets of Vladimir Putin if only he starts an invasion of Ukraine. S&P downgraded Russia's credit rating due to massive capital outflows. Each new day, according to the author, brings with it new results of how chaos is growing in the Russian banking sector.

World leaders piled on Putin with genuine zeal, said the journalist, and they criticize him for refusing to take at least one step to de-escalate the crisis in Ukraine.

As an economic guru, an expert on Russia, Anders Aslund (Anders Aslund), notes, this is a fairy tale that Russia's foreign exchange reserves are hidden somewhere in some kind of fortress that goes into the bowels of the Kremlin, and they are followed there with a bag every time recession attack. No, the reserves are not even in Russia. These funds, which have a source of international transactions for the sale of minerals, are not stored in dungeons, but mainly abroad, in foreign banks, and they can be frozen by the introduction of economic sanctions.

According to Aslund, who referred to the March report on the Russian economy of the World Bank, Russia's aggregate foreign debt amounted to 372 billion by the end of January, while international foreign exchange reserves amount to 477 billion dollars, but most of them can be frozen.

In other words, the journalist writes, Russia is rapidly approaching the time when foreign debt exceeds reserves.

Certain sanctions can also reduce Russia's national income, forcing the state to collect even more debt. The pressure exerted on the Russian economy can force the Kremlin to spend billions to protect the value of stocks and the national currency.

However, Western countries may deprive Russia of access to credit. This means that the Kremlin simply cannot solve its problems through further borrowing. This could give rise to a financial crisis like the one that the Russians had after the collapse of the USSR.

The journalist recalls that the crisis happened in the Russian economy and relatively recently: in 2008-2009, when the price of oil fell sharply.

According to Kim Zigfeld, today “the only thing that keeps Russia from falling into the abyss” is “the West’s fear of chaos that may arise in the event of a Russian collapse.”

Aslund writes that a month ago the West discussed the effectiveness of possible sanctions against Russia. But during the spring session of the International Monetary Fund in Washington 12-13 April, the following question was raised:

“But do we really want to destroy Russia so quickly?”

Russia decided "to face off with the NATO alliance, whose participants have total GDP ten times more than Russia and which spends ten times more on military spending." Russia decided to do it at the time, the journalist writes, when, even before the introduction of any sanctions, her economy was already "on the verge of a stunning recession." These are exactly the same mistakes that the USSR committed - these are the steps that led to the national collapse, the article says.

According to Aslund, Putin consults on the Ukrainian issue almost exclusively with former KGB agents. Putin does not have a single adviser who can competently assess the economic consequences of military action. Just as was the case in Soviet times, Putin does not participate in discussions, but rather makes decisions in the form of “dictatorial decrees.”

Putin stated that, according to public opinion polls, Russia strongly supported the “seizure of Ukraine”, however, the journalist believes that these polls do not reflect the public point of view: after all, the public was not properly informed about the possible economic consequences of the invasion.

“Even Russians are starting to ask uncomfortable questions,” she notes. In Vedomosti, economist Evsei Gurevich notes that in a desperate attempt to compete with the West, Russia spends almost five times more on its armed forces (meaning the proportion of military expenditures in GDP) compared to the average member of NATO. Moreover, Russia is planning an even greater increase in these costs. And this means that, like in Soviet times, the Russian people will bear a much greater burden to pay for military expenses than we see in countries competing with Russia. Gurevich warns: only a highly developed country can act as a superpower without harm to itself.

Russia can not be attributed to the highly developed countries. Rather, Russia is a country dependent on the export of raw materials, the journalist said. Gurevich is worried because his country already feels the coming difficulties. Ford and Renault have announced a reduction in business operations in Russia. In the Crimea, "McDonalds" was closed. Only in the first quarter of this year, Russia lost from 50 to 75 billion dollars as a result of capital outflows: panic-stormed investors sought to take their money out of the country, when they saw that "the neo-Soviet Putin regime had exposed its claws."

Just a month ago, observers were still hoping that more would be done in Russia to develop the principle of the rule of law, but now these commentators just want to see “bare rationality” - something that, according to the journalist, has recently been sorely lacking.

Military analyst Alexander Golts argues that Russia simply does not have the military force that is enough to occupy, maintain and control Eastern Ukraine. The analyst believes that this fact will not necessarily stop Putin from trying.

Needless to say, the journalist notes, even if Russia had the necessary strength, it still does not have the economic power to keep the Ukrainian East indefinitely.

And now we give a few comments.

Pava kava
“S&P lowered credit to Russia” means that one must believe the statements of “S&P”? .. The Russian economy is doing great ... The author's Russophobia is disgusting ...

Observed and translated by Oleg Chuvakin
- especially for topwar.ru
Ctrl Enter
Noticed oshЫbku Highlight text and press. Ctrl + Enter
We are
Results of the week. “He was terribly unlucky, especially on Friday”Results of the week. “Lord, why didn't England please him ?!”
Military Reviewin Yandex News
Military Reviewin Google News
146 comments
Information
Dear reader, to leave comments on the publication, you must sign in.