Kiev began to struggle with the movement of Subcarpathian Rusyns 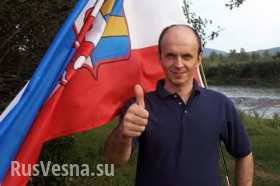 According to the "Russian Spring", a criminal case was initiated against one of the leaders of the Subcarpathian Rusyns movement Peter Hecko. Representatives of the press service of the Ukrainian Prosecutor General’s Office reported that the activist was suspected of having committed a crime under Article XXNX Art. 2 of the Criminal Code of Ukraine - "encroachment on the territorial integrity and immunity of Ukraine, committed repeatedly by prior agreement by a group of persons."

At the moment, Getsko is wanted.

According to the “Russian Spring”, the indigenous people of Transcarpathia call themselves Rusyns. Most of them profess Orthodoxy and do not consider themselves to be Ukrainians, considering themselves to be part of the Russian world. Rusyns are trying to achieve national autonomy with 1991 year. Then a regional referendum was held, in which most of the residents of the Transcarpathian region supported the autonomy of the region.

It should be noted that Hungary has claims to Transcarpathian territories. At the end of March, a rally of the Jobbik party was held in Budapest in support of the return of Hungary to Transcarpathia.

Ctrl Enter
Noticed oshЫbku Highlight text and press. Ctrl + Enter
We are
Ukrainian media rushed to refute information about the Ruthenian congress and the requirements of autonomyResults of anti-terrorist work on Dagestan in April 2014
Military Reviewin Yandex News
Military Reviewin Google News
64 comments
Information
Dear reader, to leave comments on the publication, you must sign in.