Finland in alliance with Kaiser Germany against Russia. Part of 2 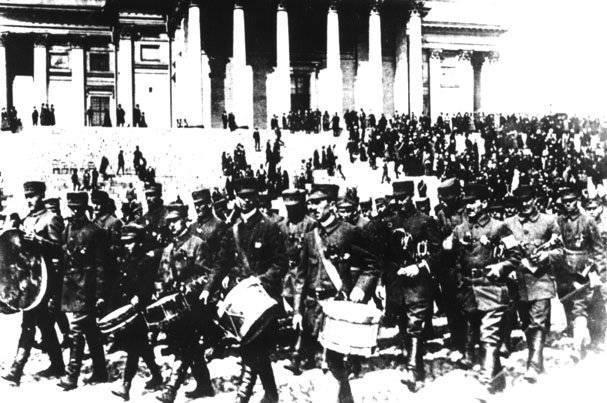 The loss of red initiatives led to the fact that the Finnish bourgeoisie and the nationalists were able to quickly organize their forces and go on the offensive. General Karl Mannerheim led the White Guard. A military-political center of counter-revolution was created in the city of Vasa (Nikolaistadt).


In response, moderate and radical socialists established a Workers' Executive Committee, which became the highest revolutionary body. 26 January The 1918 Committee ordered the Red Guard units to prepare for the capture of all important state institutions and strategic facilities. On January 27, the committee issued a “Revolutionary Appeal to the Finnish People.” On the same day, the Working Guard of the Order and the Red Guard united, retaining the name of the latter. On the night of 27 on 28 in January, the Red Guard detachments in Helsingfors occupied the council building and some other central institutions. During the day, the Reds took control of all the cities. The Finnish bourgeois government escaped from Helsingfors to Vasu. The Reds also captured several more cities in Southern Finland.

January 28 1918 was created by the revolutionary government - the Council of People's Commissioners (SNU). He was headed by Social Democrat Kullervo Manner. The southern part of Finland was under the control of the Reds. The north and much of central Finland remained in the hands of the whites. Both sides had resistance centers in the rear, which had been cleared from the enemy by the end of February 1918.

At the initiative of the workers, the old state apparatus was scrapped; workers' control was established at enterprises, railways, and important objects. They also established control over banks, began to close bourgeois, counter-revolutionary publications. Established a revolutionary court, the Sejm workers' organizations have become the leading organizations. It should be noted that the Reds faced the sabotage of a part of the bureaucracy. This led to a loss of control over finances, food supply, etc.

February 23 published a draft democratic constitution. Finland was proclaimed a republic. However, SNU did not conduct more radical activities. Large industry and banks were not nationalized, large land estates and forests were not confiscated from large landowners and timber companies. The question of giving land to small peasants, etc., was not resolved. And most importantly, SNU could not take appropriate measures to ensure state security and liquidate counterrevolutionary elements, and fight against saboteurs.

This has all become an internal prerequisite for the fall of Red Finland. The Finnish Red Guard numbered up to 100 in thousands of fighters and initially had every chance of winning. In the hands of the red was the most industrialized south of the country, all major industrial centers, including military factories. The overwhelming number of fortresses and arsenals of the Russian tsarist army was also located in the south. However, the passive tactics, when the leadership of the Reds gave up the initiative to the enemy, the indecision of domestic policy led first to the stabilization of the front, and then to defeat. In February - early March 1918, the war acquired a positional character. Both sides focused on seizing railway junctions and important settlements. There was no solid front line.

The external prerequisite for the fall of Red Finland was the white alliance with Germany. Belykh was also supported by Sweden. March 7 white government signed an agreement with the German Empire. Back in January-February, Germany transferred the 27 th Jäger battalion to Finland through Sweden and the Baltic States, in which the Finnish volunteers fought on the German side against the Russians in the Riga area. Finnish huntsmen adhered to pro-German orientation. March 5 The German fleet 1918 arrives at the Aland Islands and German troops gradually replaced the Swedish forces that landed on the islands in February. The Aland Islands became the base for the German invasion of Finland. Thus began the German intervention, which led to the defeat of the Reds.

Hostages of the confrontation of white and red Finns became Russian troops, still remained in Finland. The number of Russian tsarist army in Finland in the autumn of 1917 was about 100 thousand soldiers. Then the group was reduced due to the withdrawal of part of the forces in Russia, demobilization and the growth of desertion. By the beginning of the civil war in Finland, the number of Russian troops in Finland was about 60-80 thousand people. However, this rather significant force, which has at its disposal large arsenals, was demoralized and almost inefficient. The overwhelming majority of Russian soldiers did not have the slightest desire to participate in the new war, and dreamed only of quietly returning to Russia. The officers, on the whole, were negative towards the Bolsheviks. The Russians came under both white and red Finnish terror. And the white terror was more ambitious.

The Soviet government, although it sympathized with the red Finns, declared its neutrality, confining itself to some material support and sending insignificant Red Guard forces. Lenin and Trotsky, fearing to provoke Germany into active intervention in the affairs of Finland, were afraid to use force even to protect the lives of Russian soldiers and large quantities of military property. As early as the beginning of 1918, the Soviet government issued an order to the Russian military garrisons, which remained in the already independent Finland, to adhere to neutrality. Russian garrisons in the north of Finland practically did not resist and were disarmed. With the large Russian connections, the White Finns acted more or less cautiously, did not stand on ceremony with small and isolated subdivisions.

Back in January 1918, the White Finns walked across the ice to a number of islands of the Aland Archipelago and captured them. Demoralized Russian garrisons offered no resistance. In February, a detachment of Swedish ships approached Aland Island. The Swedes presented an ultimatum - to evacuate to Revel, all weapon and leave military property. The Abo-Aland position garrison had to fulfill an ultimatum. Weapons and property went to the Swedes and the White Finns. It should be noted that Sweden, like Germany, rendered the White Finns considerable assistance. Dozens of Swedish officers created the backbone of the Finnish army - they made headquarters, planned operations and organized communications. Finnish artillery was entirely under Swedish command. Swedish officers occupied key positions at the headquarters of the Finnish army and as commanders of units. Of the several hundred volunteers was knocked together. Swedish brigade.

The Russian fleet was in a difficult situation. Due to the German offensive in the Baltic States, Revel was evacuated. Warships and transports of the Baltic fleet crossed from Revel to Helsingfors. March 3, 1918 Brest Peace was signed. Soviet Russia was obliged to withdraw all Russian troops from Finland. All Russian ships had to leave the Finnish ports. In the meantime, navigation was impossible, they were allowed to leave part of the crew needed to transfer the ship to Russian ports.

Even before the conclusion of the Peace of Brest, the Germans pressed the Swedes on the Aland Islands. The Germans landed troops on the islands, but further their ships could not advance because of the thick ice. With the improvement of the ice situation, the Germans began the intervention in Finland. On the night of April 3, the German squadron approached the Ganges (Hanko) peninsula. German ships freely landed the expeditionary force under the command of General von der Goltz and occupied the city of Gangut (Hanko). The Russian crews blew up the 4 submarines so that they did not reach the enemy. The Germans launched an attack on Helsingfors (Helsinki).

Meanwhile, the Baltic Fleet command was able to organize the withdrawal of ships from Helsingfors. 12 March 1918 of the year left the first squad. A brigade of dreadnoughts and cruisers entered it, accompanied by icebreakers "Yermak" and "Volynets". The detachment safely reached Kronstadt. In general, the Germans did not object to the departure of the Russian ships. However, the White Finns thought otherwise. March 29 icebreaker "Yermak" moved from Kronstadt to Helsingfors for a new batch of ships. At first it was fired at by a coastal battery captured by the Finns, then attacked the Finnish icebreaker Tarmo. "Ermak" was forced to return back. Therefore, the second detachment of Russian ships left April 4, accompanied by only three small ice-breaking ships. However, this detachment safely reached Kronstadt (only one submarine returned to Helsingfors).

The Finns continued their attempts to capture the Russian ships. March 29 icebreaker "Volynets" out of Helsingfors in Revel, but on the way was seized by a group of white Finns, who entered the ship under the guise of passengers. In addition, Finnish bankers in Helsingfors offered fleet commanders to sell part of the ships of Finland.

7-12 April from Helsingfors left the third detachment of the Baltic Fleet. Almost all ships and vessels calmly reached Kronstadt. Only the hospital ship "Riga" was delayed in the fog, and was captured by the Germans. There were still 37 Russian military ships in Xelsingfors, 10 vessels under the Red Cross flag and 38 - commercial ships. 12-13 April, German troops easily occupied Helsinki. April 14 held a joint parade with the White Finns and handed the city over to representatives of the Finnish Senate. For several days, Red Finland fell. On the night of April 26, the Finnish red government fled by sea from Vyborg to Petrograd. The German intervention led to the quick victory of the White Finns.

The capture of southern Finland by the Germans and the White Finns was accompanied by terror against the Red Finns and Russians, as well as looting and seizure of property. So, the White Finns captured Russian commercial ships, and captured ships under the red flag. The German command defended only military vessels. Crews just drove, having a few minutes to collect personal belongings. Hunting for the Reds was going on all over the country, and the Russians were also hit. In Vyborg, several dozen Russian officers and students of Russian educational institutions who did not take part in the defense of the city were killed. Russian citizens were expelled from Finland not only by open terror and repression, but also by a boycott, insults in the press, in public places, on the street, deprivation of rights and property. The Russians who fled from Finland lost almost all their property. In the first days of the seizure of cities in the south of Finland by Germans and white Finns, the property of Russian merchants and entrepreneurs was confiscated. In addition, in April 1918, the White Finns seized Russian state property for 17,5 billion gold rubles. So they created the basis of their economy.

Thus, Finland became the country of the victorious militant extreme nationalism (Nazism). His symbol has become a swastika. By order of Mannerheim, it became a symbol of Finland and was inflicted on airplanes, armored vehicles, etc. The symbol of Finland and also became terror and repression against dissidents and Russians (persecution on a national basis). The leaders were the Finns and the construction of concentration camps. The White Finns created several large concentration camps, where thousands of people died. 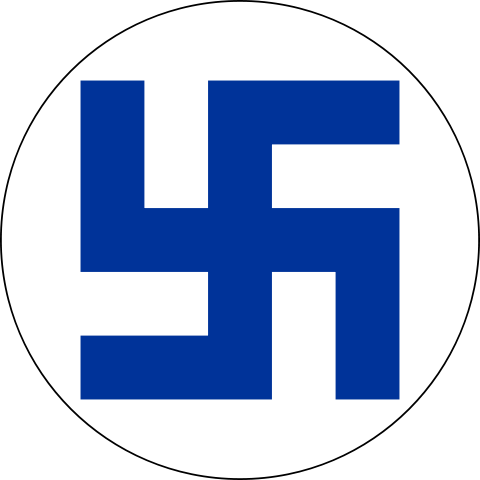