Listening to Putin. Conclusions about geopolitics

April 29 2014
145
The Chinese have a wise saying: “May you live in an era of change.” Something like a curse. In my life in the nineties of the last century, I very often recalled it. However, lately, I increasingly find myself thinking that the current era of change appeals to me more and more. It is like other changes. And since the last time I manage to watch or listen to almost every speech of our leader, these are the conclusions that came out.


How interesting is the world divided today, if you carefully listen to the words of GDP. He emphasizes this often, but without fanaticism. Therefore, it seems to be slipping by.

We have no enemies. This he said not so long ago. For dates I’m not sure, I jotted out the statements themselves in passing. The enemy is the one who must be wary, from whom evils are expected. I am glad that Russia, according to the president, has no enemies.

Russia has many partners. Here is very interesting. A partner is someone with whom you can make small gesheft or a large business. It turns out that we have a large part of the world in our partners. Partner can not love, but to respect the profit that you can fuck with it. All clear. Our partners include the States, Britain, Germany, France, and others like them.

It is clear that you can expect anything from a partner: sanctions, kidalov, defaults and other “charms” of our being. It's like every citizen of the country, but on a national scale. Ukraine is also on a par with the United States. Intelligible, right?

During the last four speeches of Putin, I heard the phrase “our Chinese allies” three times. Indicative of? An ally is a different level. Union - he is a union in Africa. And it involves something more than a profitable trading relationship. In our clear allies for Putin, we have Kazakhstan, Armenia and others. Little, but there is. And in my opinion, one ally is worth a dozen partners. So obvious parity is present.

Well, at the very end about the brothers. About the fraternal peoples. Naturally, it is first about Belarus. It is as if not discussed. But slipped in relation to Ukraine. There, of course, more difficult. Those with guns in Kiev - it turns out, partners. Everything within the framework of the definition, they do not want to pay for gas, the rights of a part of the population and journalists are infringed, unequivocally - partners. Yes, and reverse deliveries - this is also very partnership. And those in the Donbas with machine guns are brothers. Everything is laid out on the shelves.

Indeed, everything is on the shelves. Except for one thing: thrice in a week, the underlined phrase “Chinese allies”. It seems that some people in Europe can miss another trick of our unpredictable. Too much there all carried away by the sanctions and Ukraine. Too calmly, ours react to everything: to sanctions, to the cries of the State Department, to the reverse grimaces of the Ukrainian junta, to the Canadian attempts to punish us by not starting our companion. The Crimea, apparently, has not yet taught Europe anything. Well, as they say, your European problems.

Quietly and calmly preparing a turn to the east. Then you and the pipeline, and oil pipelines, and gas terminals in Vladik. And much more - something that we probably do not know about. Hopefully, we don't know yet. And it may turn out that after a while some of the partners will be confronted with the fact that they were preferred by the allies. Here are just too late to rush. And bite your elbows. And we must not be afraid of joining the Donbass to Russia. Not the absence of Russia in G7 or 20. And the real possibility of the appearance of the Big Two is Russia + China. And all this, apparently, and goes. And there will be many who, having overcome the eternal fear of the “legislators of democracy”, will support this union.

It is interesting to listen to Putin. A lot of things come to mind. One thing is clear for now - we live in a time of change. I hope that these changes are only for the better, whatever they predict. 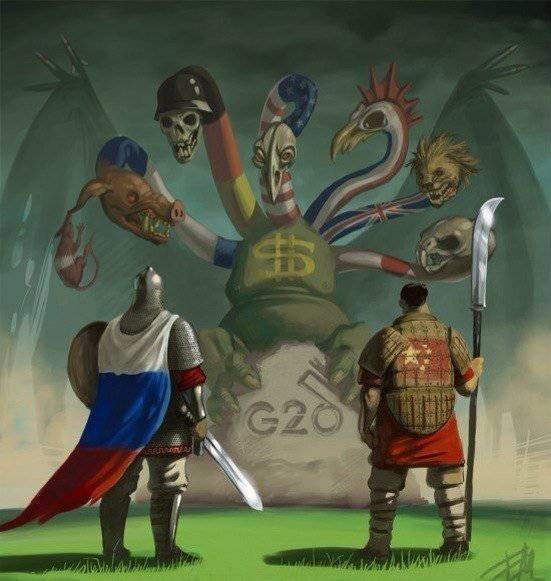 Ctrl Enter
Noticed oshЫbku Highlight text and press. Ctrl + Enter
We are
The tragedy of the American army ("The Atlantic", USA)Results of the week. “And you, stupid, scoffed at me ... Here's a saying for you - don't wake famously, as long as it's quiet ...”
Military Reviewin Yandex News
Military Reviewin Google News
145 comments
Information
Dear reader, to leave comments on the publication, you must sign in.