9 May 2011
2
Many people know the feats of the heroes of the Great Patriotic War. Representatives of all post-war generations with pleasure and ecstasy listen to stories about the exploits accomplished by ordinary people in order to save their homeland. Many surnames of heroes are constantly on hearing, often mentioned in various sources. But there is also a huge number of names that, for one reason or another, have not been so widely known. 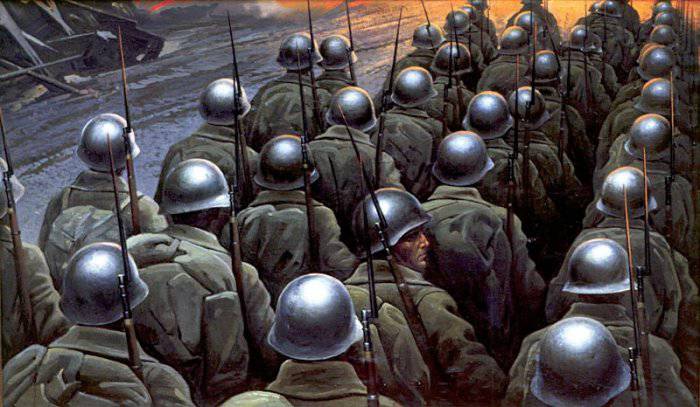 October 15 1942, the commander of the detachment of a separate company of machine guns 146 separate infantry brigade junior sergeant Agashev AF order was given. According to the order, a junior sergeant with a detachment entrusted to him was to sneak behind enemy lines and organize activities there to destroy personnel from among the retreating Nazi troops. Alexey and his squad managed to repel one of the bunkers from the enemy (destroying the Fascist 10) and organize a defense there.

October 16 1942 junior sergeant A. Agashev Received an order to organize the cover by fire of a group of intelligence officers. Thanks to the skillful and well-coordinated actions of the squad led by Alexei Agashev, it was possible to prevent the reconnaissance group’s surroundings (the Nazis destroyed 16).

October 18 1942 of the year, having received the task of the command to deliver the language, the department under the control of Alexei, interacting with four intelligence officers, managed to capture and deliver to the headquarters of the two languages.

For the skilful leadership of the personnel of the department, the successful implementation of the tasks set, this man was presented to the Order of the Red Banner.

The commander of the 3 branch of the individual rifle battalion 146 of the separate rifle brigade Bakirov K.M. after the commander of the Red Army group dropped out of operation, he took command over himself, by a strong-willed decision, leading the group.

Under the leadership of Karim, the group managed to break into several German bunkers, throw grenades at them and destroy a large number of fascists (about 50 people). After that, a counterattack from the German troops began. Karim managed to organize a reflection of the attack, while personally he himself managed to destroy the Nazis' 25. Despite the serious injury he received as a result of the shootout, the sergeant continued to remain on the battlefield and lead the Red Army men. Karim was on the battlefield until the fascists were driven back.

Due to the demonstrated resilience and courage, Bakirov managed to organize and successfully repel the enemy’s counterattack. For these actions, Sergeant Bakirov Karim Magizovich was awarded the Order of the Red Banner.

Lieutenant N. Burak, the commander of the fire platoon 3 batteries of a separate artillery battalion 146 of a separate rifle brigade during the 15-17 battle of August 1942, was with his platoon (consisting of two guns) in the zone of direct fire of enemy guns at a distance of 500 600 meters from the enemy.

Thanks to the initiative, decisiveness and personal restraint of the senior lieutenant, in three days of battle, the platoon personnel managed to destroy 3 enemy bunkers (including their garrisons), 3 machine gun points, and also an anti-tank gun.

After the beginning of the advancement of infantry, Nikolai ordered the platoon personnel to hook weapons behind Tanks HF and push forward. As a result, the guns were at the very settlement occupied by the Germans, which greatly facilitated the advance of the infantry.

In the battle, Senior Lieutenant Buraku had his arm blown off, however, despite this most severe injury, he remained next to his guns and guided the actions of his subordinate personnel. It was only possible to remove him from the battlefield by order of a higher command.

This feat was marked by command. Senior Lieutenant Nikolai Andreyevich Burak was awarded a government award - the Order of the Red Banner.

This is only a small part of the exploits that were committed by the Soviet people during the war years. The participation of every soldier, a worker in the rear, a doctor in a difficult task - the approach of victory over the treacherous invaders - can already be considered a feat worthy of great awards. But not everyone is destined to be encouraged by various government awards. Those who accomplish the feat sincerely, wholeheartedly, devoting it to their people and fatherland, will not demand any special attitude to themselves and chase after various awards.

The people who did not spare their lives for the defense of their Motherland during the Great Patriotic War are those with whom everyone should follow the example of the next generations without exception. In no case should the exploits of these people be forgotten by the inhabitants of our free country, which has become free precisely thanks to the exploits of the times of the Great Patriotic War.