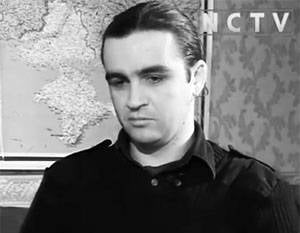 To the birthday of Lenin’s grandfather, he traditionally reread his works. And once again I was convinced that this is an immortal classic, relevant for today too.


Try to project his description of the situation after the February Revolution to today's events in Ukraine: “Take what happened in Russia six months after February 27 1917: official places that were previously given, preferably to the Black Hundreds, became the subject of mining for Cadets, Mensheviks and Social Revolutionaries.
In fact, no serious reforms were thought of, trying to delay them “before the Constituent Assembly” - and the Constituent Assembly should be delayed little by little until the end of the war! With the division of production, with the occupation of small towns, comrades, ministers, governors-general, etc., etc. did not hesitate and did not expect any Constituent Assembly!

Playing in combination about the composition of the government was, in essence, only an expression of this section and the redistribution of the “prey”, going both above and below, throughout the country, throughout central and local government. The result, the objective result for the six months of February 27 - 27 of August 1917, is undoubted: the reforms have been postponed, but there has been a division of the bureaucratic townships ”.

Today, we have the same thing: there are no real reforms (except for tax reforms and the appointment of oligarchs as governors), but there is a fierce battle for positions and posts. And at the same time, “war” hysteria is being blown up in every way, in order to divert people's attention from failures in the economy, diplomacy and other areas.

And the elections to the Verkhovna Rada will be postponed to the last, using “separatism” and “Russian invasion” as pretexts for their transfer or cancellation.

An illustration of the deplorable current state of affairs in the economy of Ukraine (except for my previous analytical calculations with figures) can be the following quote from an article on Polemika: “The Ukrainian government already suspects an unprecedented trick from the West. Yatsenyuk even burst "terpes".

Indeed, only a mentally deranged person will calmly observe how the Ukrainian currency and other reserves, still in the squeezed fingers of the new government, turn into ashes, settling in a new layer on the Ukrainian economic ashes.

Having discovered that the plans of the executive board of directors of the International Monetary Fund do not include the Ukrainian issue and there is no trace until May 2, the ministers became agitated that night and sent an official appeal. Not an appeal, almost an ultimatum: a decision on a loan should be made within a maximum of ten days. "Or what?" Not specified.

Money in the treasury left for a few days. Maximum - for two weeks. And with 1 May you need to pay for gas with Russia. And no longer 2,6 billion, but in an amicable way - about 3,5 billion dollars (because due to non-payment of the previous debt prepayment is introduced for the next month).

The reverse from Europe also does not shine, because Europeans also require prepayment. There will be no help from the IMF (I have already explained the mechanisms why), and the US will allocate “as much” 70 million dollars: 50 for “developing democracy” (read “supporting the Grant’s fifth column”) and 20 for defense (with this money you can buy modern tank or four modified T-68). That is, it's nothing at all.
In the conditions of a critical lack of money, the NBU allocated to commercial banks nearly 32 billion hryvnias for two months (of which Kolomoisky's 12 billion fell to Privat).

The ongoing backlash with public procurement also hints that no one is going to offend the oligarchy, and everything that happens is being done in its interests. Of the millions collected for the needs of the army, 80 millions over 20 millions have already been sent to the generals for holding the Spring Rainfall exercise.

And at this time in the army revolts begin, because mobilized people are kept in terrible conditions, in cold weather, in unhygienic conditions and fed by the devil knows what (among the soldiers' requirements, you can wash yourself at least after field exercises and sanitary inspection of food).

You remember how the uprising of the battleship Potemkin began?

In addition, the miners, who are protesting against a part of their salaries being transferred for the repair of Khreshchatyk after Maidan, have already begun their speeches. When the money in the treasury ends in a few days, even more massive protests will begin for all those who are not paid salaries, pensions and scholarships.

I am not talking about price increases. Here are the words of a classic on this score: “The question of raising fixed prices also has another side. This increase means a new chaotic increase in the issuance of paper money, a new step forward in the process of strengthening the high cost of living, increasing financial distress and the approach of financial collapse. ”

What did Lenin propose in order to prevent a catastrophe? “You can guarantee that you will not find a single speech, a single article in a newspaper of any direction, not a single resolution of any meeting or institution, where the main and main measure of struggle, the prevention of catastrophe and famine, would not be recognized quite clearly and definitely.

This measure: control, supervision, accounting, regulation by the state, the establishment of the correct distribution of labor in the production and distribution of products, the preservation of popular forces, the elimination of any unnecessary waste of energy, saving them. Control, supervision, accounting - this is the first word in the fight against disaster and hunger. This is what is indisputable and generally accepted.

And that’s what they’re not doing out of fear of the omnipotence of landlords and capitalists, of their immense, unheard-of, scandalous profits, profits that profit from high prices, military supplies (and for the war "work" now, directly or indirectly, almost all), profits that everyone knows, everyone is watching, about which everyone gasps and groans. "

As we see, nothing has changed since then. How much is said about the open property registry, about the electronic land cadastre, about the full transition to electronic money, about enhancing the transparency of public procurement (I’m not talking about the active use of management automation systems that would significantly reduce the bureaucratic apparatus) - and now there. Grandpa Lenin suggested the following steps to prevent a catastrophe:
1) Consolidation of all banks into one and state control over its operations or nationalization of banks.

2) The nationalization of syndicates, i.e. the largest, monopolistic capitalist unions.

5) Encouraging the unification of the population in consumer societies (cooperatives).

This is logical, reasonable, thought out and correct.

Today, only a new, not “rotten” revolution, bearing a social and anti-oligarchic nature, can save Ukraine, which is falling apart, in fact, restarting it as a new project, formulated not as “Ukraine first”, but as “People first”.

Ctrl Enter
Noticed oshЫbku Highlight text and press. Ctrl + Enter
We are
About Stalin and KhrushchevOn the other side of the “red” and “white”. Izborsk Club Report
Military Reviewin Yandex News
Military Reviewin Google News
102 comments
Information
Dear reader, to leave comments on the publication, you must sign in.