April 29 2014
51
Two months ago, we stated that Russia did not lose the information war in Ukraine - it did not lead it at all.


The information space of the collapsing state was fully occupied by the pro-media outlets - funded directly from abroad and funded by oligarchs. There worked hundreds of resources and tens of thousands of professionals and amateurs.

They invented the "Heavenly Hundred" and they invented the "golden toilet". They came up with "titushki" and came up with "Pandu". Conventionally, the pro-Russian side of the information war simply did not have time to react. She chanted "Ber-Kut!", Supporting the losers, and angrily called out Bandera Bandera - which for the latter was somehow not very offensive.

Russian news agencies and the media reproduced ingenuously (and still reproduce) the formulas that come from Kiev about “so-called popular governors”. And obediently they called (and call) the junta "new Kiev authorities." Television did not find (and does not find) anything better than in the style of the “Crime Courier” program to talk about the sexual dissatisfaction of some third-party Maidan activists and to accuse America of being in charge of the whole thing (as if it were a secret to someone or insult).

But the situation began to change - from below. 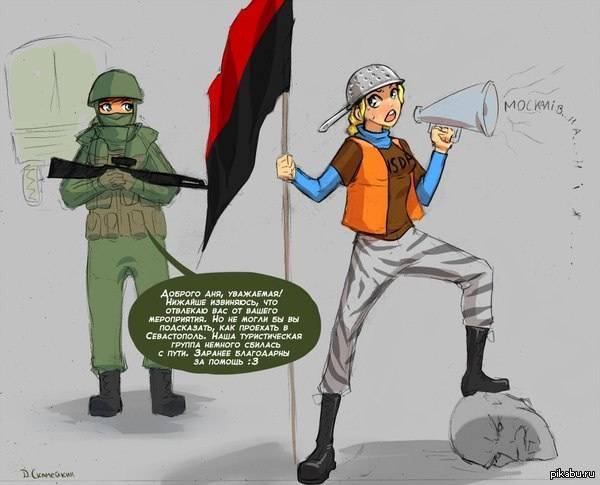 First appeared Polite People. Not the people themselves, I mean, and not even the term itself. And accompanying touching photos, pictures and songs.

The people’s machine for creating images came into motion, screwed on the courteous young people in camouflage and weapons red “thank you for not being a whale” cat - and now on the Internet they already sell chevrons of “polite people” that reproduce historical meeting VL and kote.

And today “Polite People” is performed by the ensemble of Alexandrov.

Then came the prosecutor Poklonskaya - also a shaft of pictures and flash drives. The fact that her “nyashny” image in reality is due to the fact that her face is semi-paralyzed after the revenge of the bandits - creativity only provoke. Today, her hit "Nyash Myash" has already collected 8 million views on YouTube.

Then came the “simple Krymian woman, the daughter of an officer” - which became the nominal name for the entire “sofa hundreds of Maidan”, writing on the network on behalf of the people to create the general opinion of Ukrainians. Today, these Crimeans are already being mimicked by the real Crimean daughters of officers. 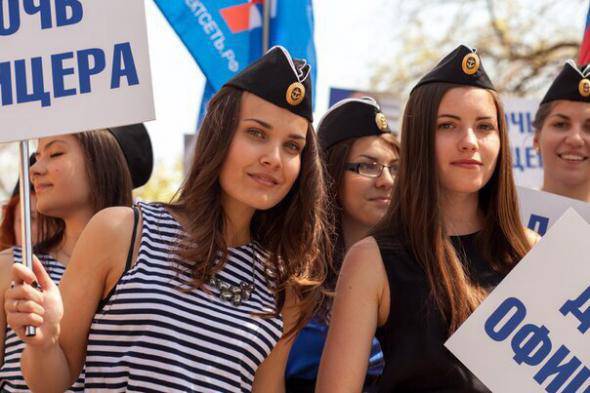 Now, in general, it can be stated that the initiative in the information war has been intercepted by the efforts of the citizens of the South-East with the support of the “sofa forces of the Russian Federation”. The Maidan resources do not have time to frighten their readers with “Russian sniper Babai” from Slavyansk — like the bearded, stern Babai is immediately reproduced in heroic pictures. 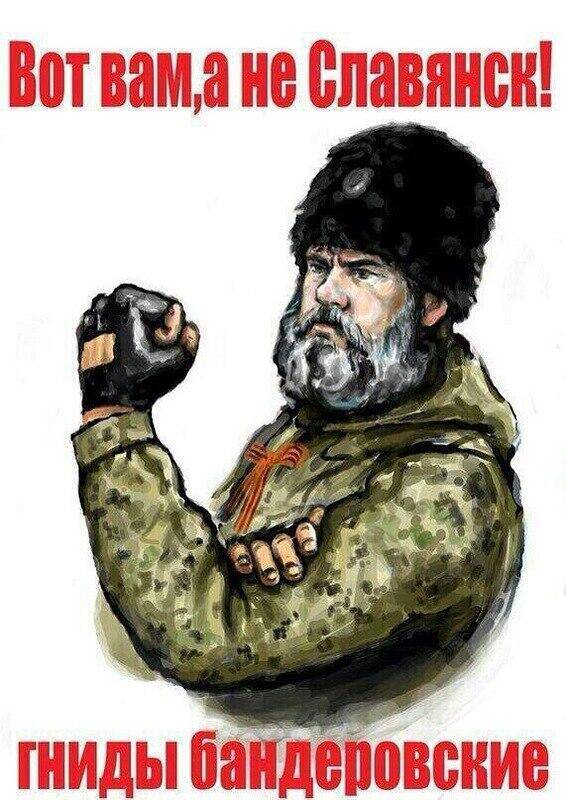 Maydanny resources turn a tantrum about the "Russian saboteurs" - and already personally the Minister of Defense of the Russian Federation turns it, basing it all on the same folk art, into a meme about "a smart, bold and polite cat."

... As a result, now the machine for the production of Maidan memes is in very bad shape. To come up with calling millions of their fellow citizens who have been wearing St. George ribbons for "Colorado beetles" for eight years now, and also arranging performances with drums playing in balalaika cells, this is not the best moves in propaganda war.

I have a version, dear readers. Still, the information war can not go completely out of the real.

So, in reality, the layouts have also changed a lot. While Maidan with more or less success mowed under the People's Revolution Against the Flying Billionaires and Selling Politicians - he had all the cards in his hands. Including informational.

And now everything was the opposite. The non-poor people with extensive experience in the “anti-people rule” Avakov, Tymoshenko and Poroshenko, and all politicians of the most “communists”, and anecdotal Dopa with Gepa were integrated into the elite brought by Maidan to power without soap. The elite was even enriched with new cute revolutionary characters - the multibillion-dollar “Beney” Kolomoisky with his “10 thousand bucks for Moscow” and Taruta with his “anti-tank moat.”

And who is on the opposite side? On the opposite side, thanks to the total betrayal of the Ukrainian elite, people turned out to be like people. Ordinary normal men with faces wrinkled from lack of sleep. People's mayors in sweaters with some small and medium-sized businesses. Miners, taxi drivers, factory workers. Tired women. Young boys and girls from small Donbass towns, which no one has ever taken out to any seminars or connected to programs for the development of democracy and increased transparency. In a word - total non-elite. People.

... Therefore, there is such an opinion - in the information war against them, the winners of the Maidan now have no more chances than in the real one.