Transnistria - the second Crimea. How it will be and who will start the war so that it does not happen 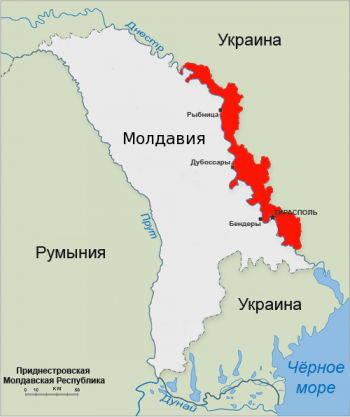 Only from the second attempt, the Moldovan parliament, by joint efforts of the coalition and the opposition, decided to exempt from the Moldavian budget excise taxes on the import of goods for economic agents from Transnistria. However, the decision was belated: the initial reluctance of the Moldovan legislature to support the much-needed bill, according to the official version, caused the transfer of the next round of negotiations in Vienna in the format of “5 + 2”.


The parties will try to gather in the Austrian capital in May, but the meeting still remains a big question.

Will Transnistria be a new Crimea?

Of course, the true reason for the failed negotiations is understood both in Chisinau and Tiraspol: the matter is not in the adoption of a legislative act on the abolition of draconian measures. The fact is that due to the events in Ukraine, the problem of the Transnistrian region has moved from a purely economic to a geopolitical one.

In the conditions of the planned full reassignment of Ukraine and Moldova to the western centers of influence, Transnistria remains for Brussels and Washington another factor of instability in the region. Moreover, Transnistria in its pro-Russian (pro-Eurasian) civilizational choice has shown extraordinary resilience and perseverance for two decades.

Not long ago, the Transnistrian parliament sent an appeal to the State Duma with a request to admit the region to the Russian Federation.

However, there are some contradictions. There are three options for the development of events.

To begin with, Transnistria should decide for itself: whether it sees itself as an independent Eurasian state, following the example of Belarus, Kazakhstan. Or does it, as in the case of the Crimea, want to join Russia as a new subject of the federation. It is clear that both options for Transdniestrians are identical with independence.

However, in the case of Transnistria this is of considerable importance from the point of view of international law. First, in fact, Transnistria today is a full-fledged state - 22, the year of building statehood may not be in vain. It has its own president, government, electoral system, different from the Russian one. There are own armed forces, currency, banking system, car license plates. In the case of international recognition, all this will remain in force, however, when joining Russia, the region will have to go under Russian standards for a long time, which will take a long time. Much more than the Crimea, which has a common maritime border, while Transnistria is on both sides pressed by Moldova and Ukraine.

By the way, Transdniestria will have the full right to international recognition if Moldova finally slips into the arms of Romania and turns it (Moldova) into the second Romanian state (which has already happened by half). In such conditions, Transnistria will actually be the only state on the planet of the Moldavian people. As in the Pridnestrovskaia Moldavskaia Respublika, let me remind you, the Moldovan language is the state language, moreover, in its original Cyrillic version.

Therefore, the right of the Moldovan nation to self-determination can be expressed in the proclamation and recognition by the world community of the Pridnestrovian Moldavian Republic.

The option of proclaiming Transdniestria as a Russian territory can be considered as an extreme option if the neighbors and the so-called world community continue to be chauvinistic towards the Transnistrian citizens.

Finally, option three is the reintegration of a large Moldovan state under a confederation, which will include three subjects: Transdniestria, Gagauzia and, in fact, “ethnic” Moldova. Such a scenario is possible only in case of victory and taking under the full control of state, political, educational institutions by pro-Eurasian and pro-Moldovan forces. Apparently, it is the Union that puts him today, given that in the upcoming parliamentary elections pro-Eurasian parties will most likely prevail.

Another thing is that, unlike the consonant, already now on such an option of Gagauzia, in Transdniestria, this attitude will be more likely to be suspicious. Both the political elite and the people remember the bitter experience of 2003 of the year, when, for some reason, the signing of the Kozak memorandum was thwarted by the seemingly quite favorable Moldovan president Vladimir Voronin. Therefore, even the “pro-Eurasian” guarantees of Chisinau are unlikely to be taken seriously by Tiraspol.

However, in the process of recognition of Transnistria can correct the crisis in Ukraine.

Note that the recalcitrant Transnistria is a significant danger not only for the European integrators who seized power in Ukraine, but also for their Western masters. The fact is that it is on the Dniester that the sufficiently efficient 14-I army of the Russian Federation is located, carrying out a peacekeeping mission. Only according to official data, its number is about a thousand people.

It is clear that if Russian troops enter the territory of the southeastern regions of the Odessa region, they will not have to wait until the army of the neighboring country makes its way through the 3 regions (Donetsk, Dnipropetrovsk, and Nikolaevsk regions is the shortest option). After all, from Transnistria to Odessa is within reach - just 100 kilometers.

In addition, it should be understood that the matter will not cost the Russian army alone: ​​most likely, in this situation, the armed forces of the Pridnestrovian Moldavian Republic will also be involved. Their numbers are quite large for such a small republic: regular units include 7500 soldiers and officers. However, if necessary, the number can be increased several times (in accordance with the statements of the Transnistrian Ministry of Defense - up to 25 000 people). If we consider that the population of Transnistria is approximately 505 000 people, 46% of whom are men, 25 000 people of military age surely exist.

Speaking about the militia, it should be recalled that as early as 2005, the law “On the People’s Militia of the MRT” was adopted, in which the organizational bases of its functioning and its place in the republic’s defense system were fixed. Hastily create it from scratch (as it is happening now in Ukraine) will not have to.

Assessing the combat capability of this potential militia, one should take into account the specifics of the region. Quite a few Transnistrians are employed in professions one way or another connected with strength training: border guards, traffic police, police, special services. According to various sources, the number of employees of the Ministry of Internal Affairs, for example, has 3 thousands of people, KGB - 2 thousands, almost as many special forces. In addition, Cossack organizations are openly functioning in Transnistria, which also numbers several thousand people. As a result, the army turns out quite impressive.

At the same time, one should not forget: Transnistria, in fact, after gaining independence at the beginning of 90, lives in anticipation of possible aggression from Moldova and Romania. This forces Transdniestrians to be on high alert.

I would like to talk about the role of Moldova and Romania in such a conflict separately.

Not so long ago, Moldovan President Nikolai Timofti ordered the army to be on high alert. It is clear that fighting efficiency is a big question, as is following the Moldovan national interests.

Of course, in case of a civil conflict unfolding, Romania can take advantage of the situation and use the Moldovan army as an auxiliary to have a “green corridor” for its own troops, first occupying Moldova, ostensibly to defend the “Romanian majority” (which is in fact Moldovan). And then Bucharest will go further, already to Ukraine, for the return of the “native Romanian lands” to the Ukrainian Bessarabia. Surely this option is considered as the extreme at NATO headquarters, if control over southeastern Ukraine cannot be maintained by the puppet government of Turchinov.

Judging which parts of the Romanian and Moldavian armies will be involved is quite difficult. The Moldavian army is small (about 5 thousands of servicemen). However, the Minister of Defense Valery Troyenko said recently that it is necessary to increase the number of personnel in 2 times due to the “Transnistrian threat”.

But in Romania, the army is very impressive - up to 75 thousand people. That is, a potential military conflict would be more Romanian-Transdniestrian than Moldovan-Transdniestrian. The army of Moldova, of course, will be involved in it, but rather in secondary roles. Testing the joint actions of the armies of the two states is conducted regularly. In particular, in July last year, in the Moldovan settlement of Bulboaca (located only 20 km from Bender - the most likely direction of impact), a joint military exercise of the two countries “Peace Shield” was held, where both sides were present before the 150 military. In addition, according to the law on military cooperation between Moldova and Romania, adopted last year, the latter actually has the right to be on Moldovan territory without hindrance.

It is not excluded participation in the conflict and Ukraine. So, in September-October, joint Ukrainian-Romanian-Moldavian exercises "South-2014" are planned. The draft law on their implementation was submitted by Turchinov to the Verkhovna Rada on March 25 and was promptly adopted by it. The goals are the same:

"... increasing the level of interaction between the units of the armed forces of Ukraine, the Republic of Moldova and Romania during participation in peacekeeping operations." The main task of Ukraine, most likely, will be the blockade of the air transport of reinforcements from the Russian Federation.

In essence, the position of the Pridnestrovian Moldavian Republic and its status today depend on a more or less peaceful resolution of the situation in the South-East of Ukraine. Forcing can be only in the case of a force resolution of the Ukrainian crisis.

Whatever it was, Transnistria today is once again becoming a factor influencing the geopolitical alignment throughout Eastern Europe. The declaration of independence of this region (or its accession to Russia) will happen sooner or later, and this will fundamentally change the balance of power in the region. In favor of unambiguous and uncompromising strengthening of Eurasia on the western borders.

Ctrl Enter
Noticed oshЫbku Highlight text and press. Ctrl + Enter
We are
“If Moldova takes a step towards Romania, Transnistria will fall off”The role of the “anchor” holding Bessarabia from Romania moves from the PMR to the Gagauz and the Bulgarians: regional results-2013
Military Reviewin Yandex News
Military Reviewin Google News
36 comments
Information
Dear reader, to leave comments on the publication, you must sign in.