The entry of Russian peacekeepers to the South-East of the ex-Ukraine is inevitable. When will it happen 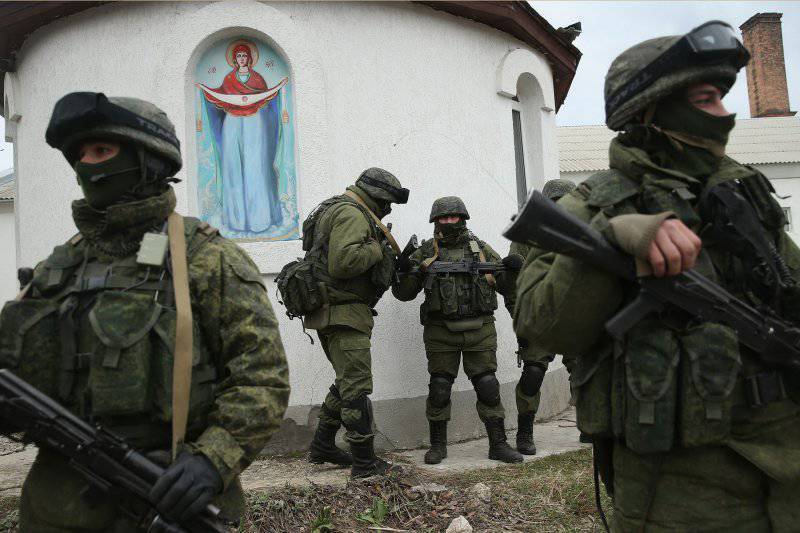 The Kiev junta announced that another provocation, called “the active stage of the antiterrorist operation,” was successfully completed.

Of course, the success of the clumsy attempt to attack Slavyansk has to be doubted. But once officially announced the continuation of provocations, and even that they are passing according to a certain step-by-step plan, we will try to determine the true goals of these actions. And also see how events will continue to evolve.

To begin with, the stated goal of the “antiterrorist operation” - the elimination of “separatist terrorists” (activists of the Southeast uprising) - simply cannot be achieved. We have already written in detail that the Kiev putschists do not have sufficient forces to suppress the uprising. Despite the most powerful propaganda in the Ukrainian media, there is simply no one to “clear out” the South-East of its own armed people. The “National Guard”, recruited from the ideological nationalists, is not very efficient. Power structures and the armed forces, which formally submit to the junta, are not eager to carry out criminal orders. According to unverified information, during yesterday's “special operation” even the anti-terrorism unit of the Security Service of Ukraine “Alpha” refused to carry out the order. And only nationalists who received the status of “national guardsmen” and a special unit of the Omega internal troops participated in the fire contacts. But to suppress a really massive and, moreover, armed uprising - not enough street hooligans, let them armed in a hurry. For the successful suppression of the uprising junta need thousands of groups, consisting of those who know how to handle weapons and ready to shoot at fellow citizens. So far the junta has no such forces.

From this circumstance follows the first goal of the “phased” provocations. It is impossible to motivate the “loyal” forces for punitive operations with the help of propaganda alone. So, it is necessary to support virtual motifs with real ones. Bloodshed should cause mutual bitterness and bitterness. If the resistance fighters are constantly kept under stress by “psychic attacks”, and through provocations forced to open fire, then after some time the virtual image of the enemy will be reinforced by the junta’s troops with the blood of comrades. Then, as the putschists hope, the loyal forces will become more decisive in the struggle against the compatriots.

This goal can be achieved. But these actions cannot lead to the declared "integrity" of the former Ukraine. They will lead to the opposite result - a full-scale civil war instead of the current sporadic one, and this full-scale war will finally bury the remnants of the unity of citizens and territories.

Whether persons who have appointed themselves by the Ukrainian authorities are capable of soberly assessing the consequences of their actions or incapable is not important. Whether they understand what they are doing, or sincerely do not understand, it does not matter. What matters is the apparent lack of independence of the current Kiev authorities. And let someone seem to be a formality that the vice-president of the United States on a visit to Kiev on the eve of the Slavic assault was planted by the Verkhovna Rada protocol service at the head of the table. In reality, it is in Washington that the decisions that the Kiev putschists are trying to execute are made.

The beginning of a multi-way provocation was laid on April 12 by a visit to Kiev by CIA Director John Brennan. After the visit, the Kiev president-speaker-commander-in-chief Turchinov signed a decree on the start of a “special operation in the South-East”, hardly feeding the illusions about its success. What forces can be counted on and what are the real chances of success of such a “special operation”, - Turchinov had the opportunity to judge not by his own propaganda. And nevertheless - he gave an order, actually signifying the beginning of a civil war.

The first attempt to unleash a massive bloodshed failed. Even in spite of the shooting of the unknown at the entrances to the Slavyansk 13 of April, which was supposed to provoke self-defense and the unit of the Armed Forces standing next to the cordon at the beginning of senseless fratricide. Even despite the landing of "black men" 15 on April at the airport of Kramatorsk, engaged in self-defense. Even despite the provocateurs in Mariupol, who on April 16 staged firing on the territory of the 3057 military unit, causing a return fire and a “counterattack” of the national guards who were there, but against unarmed Mariupol residents. Even despite the Easter provocation 20 April. Did not work. Not so easy to unleash large-scale fratricide.

And now the whole US vice president is visiting Kiev on April 22. And what happens after the visit? That's right, a new "active" stage of multi-way provocation! New high-profile statements by the junta about the determination to end the “terrorist separatists”, new demonstrative movements of the military forces, overflights aviation over settlements - all this is psychological pressure on self-defense. It does not fit into the formula of counter-terrorist operations, which are usually carried out less "noisy". At least in terms of the secrecy of training and movement. Since all the actions of the junta were deliberately demonstrative, and the results are insignificant from a military point of view, it is difficult to believe that the true purpose was a real assault on Slavyansk. It was precisely a provocation - an event designed for a certain reaction of the enemy.

So who and what provoked? Why every time the “active stage” of provocations begins with the visit of representatives of the American colonial administration? And whether the objectives of the provocation?

I dare to assume that the true object of the next stage of the psychological (fictitious) "anti-terrorist operation" is Russia. The Russian leadership was provoked to deploy troops in the South-East of the former Ukraine. And this goal was almost achieved - this psychological operation could lead to a decision on the immediate deployment of troops. But did not lead.

Why the overseas owners of the Kiev junta need this, and why the putschists themselves are ready to provoke, at first glance, the undesirable entry of Russian troops for them, should be discussed separately. But at the moment we can state the following.

1. Having begun active hostilities against the insurgent Southeast, but not having achieved the entry of Russian peacekeepers by this step, the junta fell into a very difficult position. It cannot win a military victory over the rebels and will no longer be able to return territorial integrity by peaceful means.

2. Provocations and attempts to expand the scope of the civil war will continue. Having taken the first irreversible steps, the junta can no longer be inactive. And the insurgent Southeast can no longer be persuaded to return to the former Ukraine.

3. The junta cannot allow referendums to be held in rebel areas. And to destabilize normal life in the South-East, everything possible will be done, including terrorist attacks.

4. Russia will still have to enter peacekeeping troops to end the terror against the inhabitants of the South-East. But not when it is desirable to the enemy, and not in those circumstances that are prepared by the enemy.

Today, Russia has retained the initiative of action. And, as you know, imposing your initiative on the enemy leads to victory. The main thing is that our actions always appear unexpected to the enemy.

Ctrl Enter
Noticed oshЫbku Highlight text and press. Ctrl + Enter
We are
Interview of V. Putin to Channel One and the Associated Press AgencyWhat you didn't want to know about England
Military Reviewin Yandex News
Military Reviewin Google News
130 comments
Information
Dear reader, to leave comments on the publication, you must sign in.