Self-defense commander of Slavyansk Strelkov: "People from my squad fought in Chechnya and Central Asia"

April 29 2014
68
For more than a month this man remained in the shadows. On behalf of the people's self-defense of Slavyansk, the “people's mayor”, Vyacheslav Ponomarev, spoke and was called the leader of the militia. However, it was clear that Ponomarev was only a political figure. A military planning is engaged in another body, located in the building of the SBU Slavyansk. It was here that the operation to attack the airfield in Kramatorsk was developed, when Mi-8 and An-2 were blown up. On Saturday, another helicopter was attacked, which, after being damaged, barely went to Raisin. They were finally brought here for interrogation of foreign observers detained on Friday at one of the roadblocks.


On Saturday, Denis Pushilin, a member of the DPR Presidium, arrived in Donetsk from this headquarters. Make connections After a long meeting with journalists, he went along with Igor Strelkov, commander of the Slavyansk self-defense detachment. Together they announced the unification of political and military militia structures. And all the self-defense forces of the "Donetsk People's Republic" went under the command of Strelkov.

The first interview without a mask, Igor Strelkov, was given to Russian correspondents of Komsomolskaya Pravda, which we publish in abbreviated form. 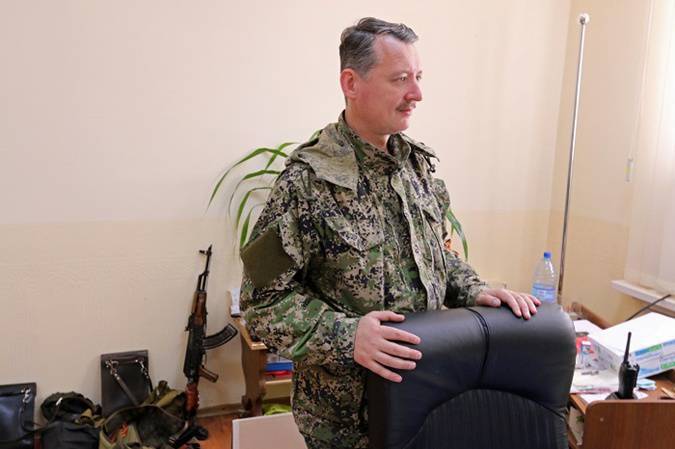 Where did your squad come from?

- This militia, of course, is heavily diluted by volunteers from other regions. The detachment with which I came to Slavyansk was formed on the territory of the Crimea. I will not hide it. All these are volunteers, and two thirds are citizens of Ukraine. Not only Crimeans, there are refugees from other regions of Ukraine - from Vinnitsa, Zhytomyr, Kiev. Of course, a lot of Donetsk residents and people from Lugansk region. It was at their suggestion that the detachment made the decision to arrive in Slavyansk.

- According to your people, it is clear that they took not the first time. weapon in hand ...

- Most of the squad does have combat experience. Many, now citizens of Ukraine, fought in the ranks of the Russian armed forces - Chechnya, Central Asia. There are warriors who fought in Iraq and South Africa as part of the Ukrainian armed forces. There are even those who managed to visit Syria.

- Where do you get weapons from?

“On the first day, we disarmed the Slavyansk police department, where a large number of firearms were seized. We have disarmed several divisions of the 25 airborne brigade, a division of the frontier service of Ukraine. Total took about 150 barrels of automatic weapons, several grenade launchers. Plus six assault vehicles. One self-propelled mortar "Nona" ...

- On Friday you detained some military observers ...

- I gave you their documents. This mission, according to the testimony of one of the Ukrainian military, carries out a detour of the border in order to inspect the locations of the Russian troops. What they did here, I honestly can not imagine. Perhaps, under the cover of diplomatic status, they tried in favor of the Ukrainian authorities to reconnoiter the militia positions in the hope that they would not detain foreigners. Although, most likely, this is another amazing strategic idea of ​​the Ukrainian command, which does not know the location of the militia posts. When the bus with observers accompanied by the traffic police arrived at the checkpoint in Kramatorsk, the Ukrainian military began to hide their military documents in panic. This suggests that they absolutely did not expect to see an armed militia here.

- How did the foreigners react?

- Very calm. These are professional trained personnel intelligence officers, they absolutely did not panic.

- Did they have any special equipment?

- Yes, but I still would not want to voice what. I will conduct negotiations on their release only with representatives of the Russian Federation.

Ctrl Enter
Noticed oshЫbku Highlight text and press. Ctrl + Enter
We are
In the program "Rise" Sergey Dorenko talked with the ex-Minister of Defense of the DPR Igor StrelkovPeople’s Mayor of Slavyansk: “We didn’t think it would reach war, as we hoped for Russian help”
Military Reviewin Yandex News
Military Reviewin Google News
68 comments
Information
Dear reader, to leave comments on the publication, you must sign in.