The end of the Shuttle era is near: the last launch of the space shuttle Endeavor 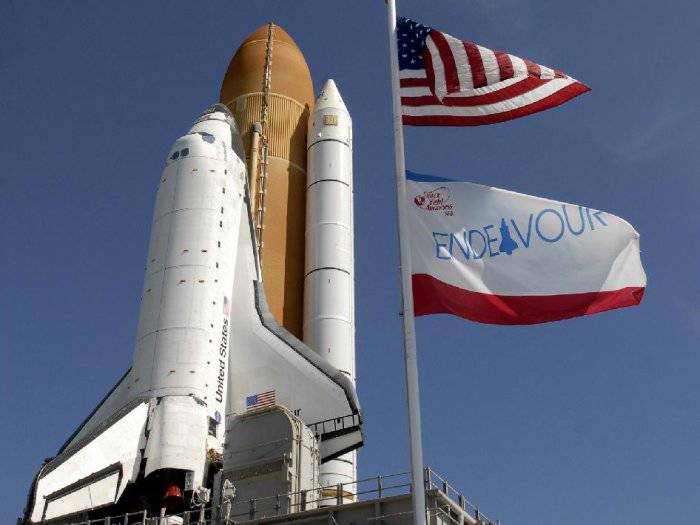 The era is nearing completion: the American space shuttles, after 30 years and more 130 launches, will never leave Earth. In the coming days, the last flight should go "Endeavor", and in June - "Atlantis".

The last flight of the Endeavor shuttle was scheduled for 29 April. Start delayed for technical reasons, and the new launch date is still unknown. As stated by representatives of NASA, this flight will take place no earlier than May 10.

Before the last flight, the Endeavor was once again loaded like an ass. The shuttle must deliver to the International Space Station over 7500 kilograms of equipment. Most of this load is an alpha-magnetic spectrometer, thanks to which it will be possible to measure cosmic radiation.

Mike Finke, one of the six astronauts aboard Endeavor, explains: "It turned out that we do not understand 85 percent of the Universe, we do not know why galaxies do not fly, all scientists are just helpless before this ... And now we have a unique an opportunity to discover through the international mission what is actually happening outside. We are just messengers, but we will closely monitor the 2 billion-dollar instrument that goes to heaven to search for new knowledge. "

Before this experiment, more than a dozen countries were involved. They built a spectrometer in Geneva, at CERN, the European Center for Nuclear Research. Scientists are looking for anti-matter, that is, what should remain after the so-called Big Bang, from which, according to one of the theories, the Universe originated. However, in such experiments it is rarely possible to exactly imagine what will be revealed.

Also in the load: the so-called probing system of the orbital manipulator. The fifteen-meter shoulder, which, in fact, is attached to a kind of cargo crane of the Shuttle and with its help the inspection of the orbital manipulator takes place. The system should remain on the ISS and be used there for repairs, explained Kirk Shirmen, deputy director of the ISS program. “If you remember, in October 2007, we used this leverage to repair one of the damaged solar panels on the ISS. We are very pleased that there is such an opportunity on the space station,” said Shirmen.

Since in the coming years, the space station will do without a shuttle service, so Endeavor will take away a couple of additional reserves just in case. And the task of the team of six astronauts is the completion of the space station. On Earth, the end of Shuttle means the release of thousands of people, explains John Shannon, the head of this program. For three years, there has been a reduction in jobs, he says: "At the end of 2006, we had 14 thousand employees, now a little more than 6 thousand. The number of civil servants was then 1800, today 1000 is barely typed."

Competition in space, the United States pass without a fight?

However, says the head of the ISS, John Shannon, in cooperation with the European Space Agency, nothing will change. But cuts in funding for space programs in the United States hurt the pride of Americans as a nation of researchers in the universe. And in subsequent years, American astronauts will have to be sent to the space station by Russian Soyuz rockets.

And yet: the ISS itself should be put on scrap metal already in the 2015 year. But the countries were unanimous in their opinion that it would be sheer waste to liquidate the station several years after its construction. According to current plans, it should last at least until the 2020 of the year - even if Shuttles will not be able to moor on it in the near future.
Ctrl Enter
Noticed oshЫbku Highlight text and press. Ctrl + Enter
Military Reviewin Yandex News
Military Reviewin Yandex Zen
2 comments
Ad