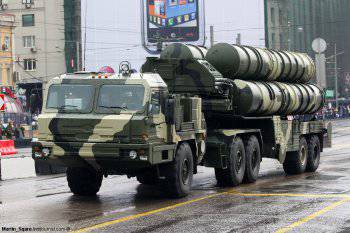 The official representative of the Aerospace Defense Forces (EKR) Colonel Alexei Zolotukhin said that the combat crews of the Zvenigorod anti-aircraft missile regiment, armed with the Triumph C-400 anti-aircraft missile systems, took to the alert duty of the air defense of the Russian capital, notes the business newspaper "Sight".

Training simulator "Timbre-M" can simulate any conditions of the combat situation in real time and geographic dimension. Specialists of the training regiment can prepare the combat crews of the C-300 and C-400 missile regiments to work in any area of ​​the planet.

It is worth recalling that at the disposal of the Ministry of Defense of the Russian Federation there are seven C-400 regiments, two of which were received by the defense department in December last year. The development of the C-400 “Triumph” system was carried out by the Almaz Scientific and Production Association named after Academician A. A. Raspletin. This system of non-strategic ABM and air defense with the latest software can be used in any physiographic and climatic conditions with intensive electronic countermeasures.