Donetsk People's Republic took control of another city in the Donbass 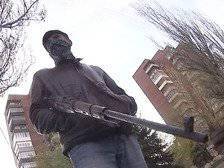 According to the news agency "Vesti"referring to the television service News (TSN) channel 1 + 1, in the morning of April 27 a group of armed men seized the police building. It is noted that unknown persons entered the building and do not allow employees to work. No requirements are put forward.


As noted by Interfax, local media reported that armed persons were also seen from the executive committee Konstantinovka.

RBC Ukraine reports that barricades are being erected in front of the entrance to the building, and urban transport bypasses the seized administrative buildings.

It is worth noting that Konstantinovka is a city of regional significance in the Donetsk region with a population of about 100 thousand people, which is the administrative center of the Konstantinovsky district. It is located about 60 kilometers from Donetsk.

Ctrl Enter
Noticed oshЫbku Highlight text and press. Ctrl + Enter
We are
The railway bypassing Ukraine will be in 2017!
Military Reviewin Yandex News
Military Reviewin Google News
87 comments
Information
Dear reader, to leave comments on the publication, you must sign in.