Belarusian sight for shooting from the corner 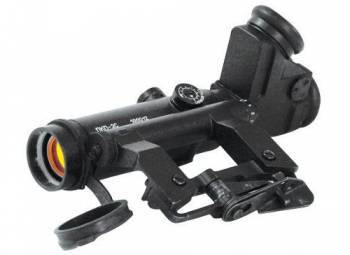 According to the news agency “Russia's Arms”, the specialists of the Belarusian company “BelOMO” developed a PKP sight (a collimator periscopic sight), which allows firing from around the corner. This was told by the director of the scientific and technical center "LEMT", which is part of the holding "BelOMO", Alexey Shkadarevich.


“We have sights that allow firing from around the corner,” he said. “Such sights are designed for use in urban combat, and I believe they will be in demand in Russia.”

Shkadarevich also noted that they had demonstrated the PCP to the Deputy Prime Minister of the Russian Federation, Dmitry Rogozin, who had recently visited Minsk. During the demonstration, the shooter managed to hit the target at a distance of 100 meters, which, according to a specialist, “is a very good indicator.”

It should be noted that the control panel PKP can be installed on all types of Russian automatic weaponsequipped with dovetail mount. There are no complex electronic components in the design of the sight, which increases its survivability compared to foreign analogues, for example, the Israeli Corner Shot aiming unit. The Belarusian product does not use any chemical or radioactive materials, which simplifies its operation.

The control panel provides a one-time increase in aiming, and its mass is no more than 950 g. One AA battery is used for power supply.