US sanctions against the Russian "defense" 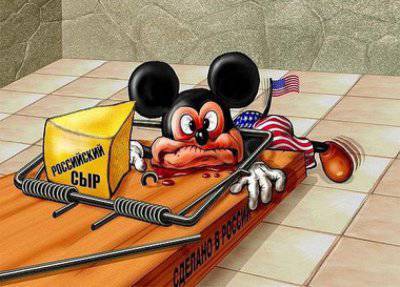 The American authorities have plotted evil. According to the Deputy National Security Adviser to the President of the United States, Tony Blinken, the White House intends today (28 April) to impose sanctions on the defense and technological sectors of the Russian economy. No, this is not a rumor, not the assumptions of leisure analysts and not poorly translated information from the site "WikiLeaks". On the sanction plan said the said Mr. Blinken himself on the TV channel "CBS".


He said that the sanctions would be turned against those companies and those people that Washington considers close to Vladimir Putin.

“We will celebrate people who are part of his environment and have a significant impact on the Russian economy. We will celebrate the companies that control the people in his circle of approximate ", - quoted the words of Blinken magazine "Expert".

Blinken clarified: “We will also take steps in the field of high technology, their defense industry. Together, it will have an effect. ”

RIA News" reminds that on Saturday the G7 states accused Russia of non-compliance with the Geneva agreement on de-escalation in Ukraine and threatened with new sanctions. The Ministry of Foreign Affairs of the Russian Federation has previously stated that it is inappropriate and counterproductive to talk with Moscow in the language of sanctions.

Blinken said something else. “Putin faces a difficult choice. He can continue his policy in Ukraine or retreat and settle the conflict through diplomacy, ”quotes the words of the presidential adviser Utro.ru with reference to "CBS".

In addition, Mr. Blinken noted that the sanctions imposed after the annexation of Crimea by Russia bore fruit: “The measures taken had a significant impact on the Russian economy. Its financial markets have sunk to 22% since the beginning of the year, and the ruble is at the lowest level. ”

Earlier, the US administration was thinking about the sanctions blockade of Russia. A few days ago, Barack Obama stated, as conveyed Interfaxthat Russia does not fulfill its part of the agreements on Ukraine signed in Geneva: “For the time being we see no signs that they act in accordance with the spirit of the agreement worked out in Geneva.” And in order for the Russians to become more docile, the White House host scared the Kremlin with “further sanctions.”

Klitschko explained to the widest public the following: “The territorial integrity and independence of Ukraine is under attack from Russia. Today, the urgent task is to stop Russian aggression and ensure non-interference in the internal affairs of our country. ” According to V. Klitschko, the West should impose sanctions against Moscow, which “should cover all sectors of the economy and be really painful. Unfortunately, the Russian leadership understands only the language of force. ”

As for the new American sanctions against Moscow, there was a publication in the British newspaper The Times, which argued whether the United States could impose sanctions on Putin’s personal fortune (according to some estimates, 40 billion dollars) allegedly preserved in Switzerland. The relevant US Treasury Department for the fight against terrorism and financial intelligence to search for Putin’s billions is just waiting for an order. Washington, of course, is counting on the understanding of Swiss bankers.

In the Western press, there were also talks about alleged widespread sanctions - that is, it is not only Putin. New sanctions may affect primarily the primary industries of Russia, as well as its banking industry. That is, the Americans initially planned to hit the sore point of Russia. It was about some tough prohibitive measures against the Russian leading industries.

The result of the sanctions with which the West, headed by the prince of this world Mr. Obama, continues to frighten Russia, until it became “accelerated” in the matter of the upcoming gas deal with China. Recall that A. Miller recently met in Beijing with the chairman of China National Petroleum Corporation Zhou Jiping. Analysts agree that Vladimir Putin will sign an 30-year contract for the supply of pipeline gas to China in May. And it will be the Ukrainian crisis that will push him towards this decision. The Ukrainian crisis and the alleged harsh sanctions are forcing the Kremlin to look for gas sales outside the European Union. The press also speculates about the currency of the contract. Some analysts admit that it will not be the usual dollar in international payments ...

Recall, four days ago, 24 of April, speaking of the “non-compliance” by Russia of the Geneva agreements, B.H. Obama emphasized that the new sanctions against Russia are ready (thus, probably, the US president made it clear that he does not throw words to the wind ). The reason for the prepared sanctions was also announced: Moscow will be punished "for inaction ... in resolving the crisis in Ukraine."

Mr. Obama also said on that day that in the economic restrictions against Russia, the United States must enlist the support of the allies (this, of course, about the EU). “There are some things that we can do alone, but the end result must be ensured by joint, collective efforts,” said the American president. As for the introduction of sanctions, Obama said that they can begin to act in a few days.

A few days from April 24 has passed. And by the evening, judging by the formidable statement of Tony Blinken, it will become clear whether the United States agreed with Europe and whether they would “include” general sanctions against the Russian defense industry and other industries.

Observed and commented on Oleg Chuvakin
- especially for topwar.ru
Ctrl Enter
Noticed oshЫbku Highlight text and press. Ctrl + Enter
We are
Situational analysis of the death of the MH17 flight (Malaysian Boeing 777), made on the basis of engineering analysis from 15.08.2014Results of the week. “Excuse me, aren't you crazy?” - “No. I have a certificate "
Military Reviewin Yandex News
Military Reviewin Google News
217 comments
Information
Dear reader, to leave comments on the publication, you must sign in.