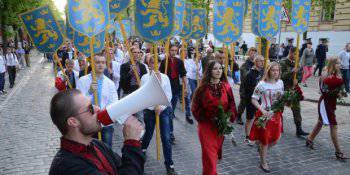 RIA News" reports that, despite requests from the Lviv regional administration to refrain from public events, approximately 500 people marched through the center of the city with nationalist slogans. The organizers of the march were activists of the organizations “Student Brotherhood named after Stepan Bandera” and “Native Land”.


As noted by UNIAN, marchers gathered near the monument to Stepan Bandera on Mira Street. There were police officers, doctors, Lviv bikers with national symbols on motorcycles, as well as activists of the people's self-defense of Lviv region, who ensured law and order along the route of movement of the column, tracking possible provocations. Also on the square were several representatives of the Russian media.

It is worth noting that the veterans of the national liberation movement and the persons who served in the Ukrainian SS division "Galicia" did not participate in the action.

During the march, its participants chanted slogans “SS Heroes' Division 'Galichina'!”, “Glory to the nation - death to the enemies!”, “We are Lviv are the strongest!”, “Bandera, Shukhevych are the heroes of Ukraine!”.

It is worth recalling that the SS division "Galicia" was formed from Ukrainian volunteers during World War II with the permission of the German occupation authorities. The day of its foundation is considered 28 April 1943. In the summer of 1944, she was defeated by soldiers of the Red Army near the Ukrainian city of Brody.

Ctrl Enter
Noticed oshЫbku Highlight text and press. Ctrl + Enter
We are
Veterans of the Victory Parade: we saw the military power of RussiaNorth Korea promises a “sea of ​​fire" in response to "provocations"
Military Reviewin Yandex News
Military Reviewin Google News
92 comments
Information
Dear reader, to leave comments on the publication, you must sign in.