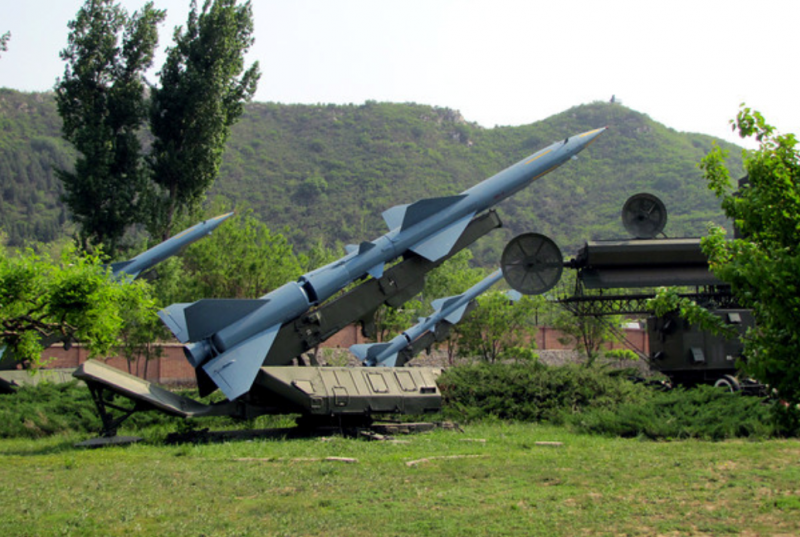 In the 50-s aviation The United States and Kuomintang Taiwan repeatedly violated the air border of China. The Chinese MiG-15 and MiG-17 fighters repeatedly climbed to intercept violators. There was a real air war over the Taiwan Strait. In 1958 alone, PLA aviation shot down 17 and damaged 25 enemy planes, while 15 MiG-15 and MiG-17 fighters suffered their own losses.

After suffering sensitive losses, the Kuomintang people went to reconnaissance flights at altitudes, where the fighters available in the PRC could not reach them. For this, US-derived high-altitude reconnaissance aircraft were used: RB-57D and U-2.

The Americans who were arming Taiwan were not altruistic: the main purpose of the reconnaissance flights that the Taiwanese pilots were to carry out was to obtain the necessary information from the US on the creation of nuclear weapons in the PRC. weapons. 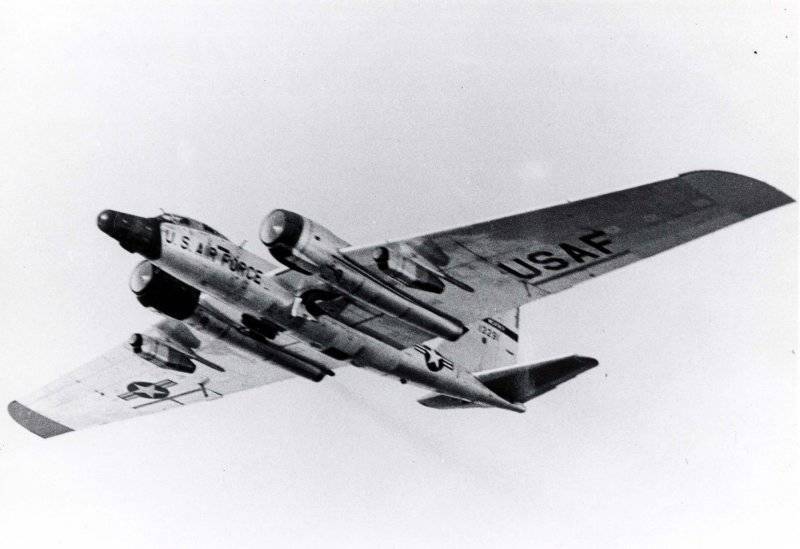 In the first three months of the 1959 of the year, the RB-57D made ten hours of flights over the PRC, and in June of the same year, the reconnaissance aircraft flew twice over Beijing. The celebration of the 10 anniversary of the founding of the People's Republic of China was approaching, and forecasts of a possible breakdown of anniversary celebrations looked quite realistic. The then Chinese leadership was very sensitive to these flights.

In this situation, Mao Zedong made a personal request to Khrushchev to deliver the latest CA-75 “Dvina” aircrafts created in KB-1 (Almaz Scientific and Production Association) under the leadership of A.A. Raspletin to the People's Republic of China. Despite the beginning of the cooling of relations between China and the USSR, Mao Zedong’s personal request was satisfied, and in the spring of 1959 of the year, in a state of deep secrecy, five firefighters and one CA-75 technical division were delivered to the PRC "Torch" under the direction of PDGrushin.

At the same time, a group of Soviet specialists was sent to service these missile systems in China, who, in addition to preparing Chinese calculations, began organizing air defense of large cities: Beijing, Xian, Shanghai, Guangzhou, Wuhan, Shenyang.

Under the leadership of a Soviet military adviser, Colonel Viktor Slusar, 7 of October 1959, near Beijing, at the height of 20 600, the Taiwanese RB-57D, a twin-engine long-range reconnaissance Canberra, was for the first time shot down. The tape recording of the airman’s negotiations with Taiwan was cut short in mid-sentence and, judging by it, he saw no danger. As the study of the fallen debris showed, the high-altitude reconnaissance RB-57D fell apart in the air and its fragments flew several kilometers, and the pilot of the reconnaissance aircraft Van Yingqin was mortally wounded. 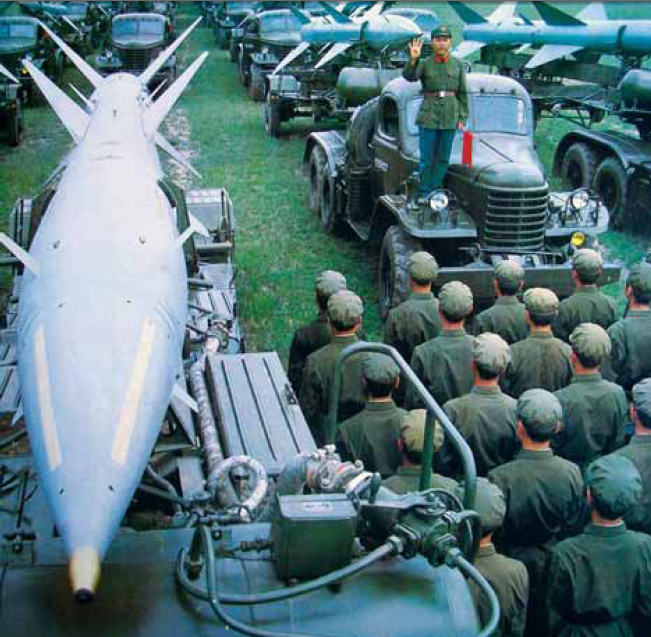 In order to conceal the presence in China of the latest anti-aircraft missile technology in those days, the Chinese and Soviet leaders agreed not to give an open message about the aircraft that had been shot down. When Taiwanese media reported that RB-57D crashed, fell and sank in the East China Sea during a training flight, Xinhua agency responded with the following message: "BEIJING, October 9. October 7 in the first half of the day alone A Chiang Kai-shek American-made reconnaissance aircraft, with provocative targets, invaded airspace over areas of northern China and was shot down by the air forces of the People’s Liberation Army of China. " Like what kind of weapon - for reasons of secrecy - not a word. 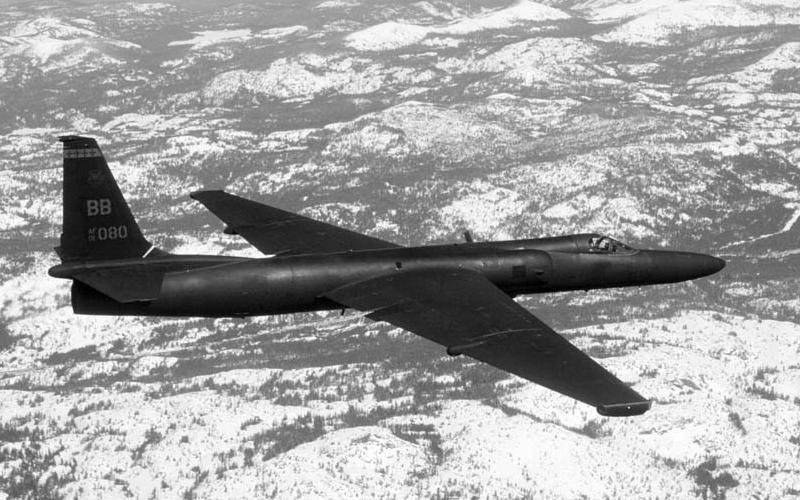 In total, 5 high-altitude reconnaissance U-2 reconnaissance aircraft under the control of Taiwanese pilots were shot down over the PRC, some of them survived and were captured. Only after the Soviet anti-aircraft missile was hit in the Sverdlovsk region by the previously inaccessible U-2, and this received a great international response, the Americans realized that high altitude is no longer a guarantee of invulnerability.

The high fighting qualities of Soviet missile weapons at the time prompted the Chinese leadership to acquire a license for the production of SA-75 SAM systems (the Chinese name is HQ-1 (HongQi-1, “Hongzi-1”, “Red Banner-1”)), about which All the necessary agreements were reached soon. But began to increase in late-1950's Sino-Soviet differences have led to the fact that in 1960, the Soviet Union announced the recall of all Chinese military advisers, which was the beginning of the practical collapse for a long time, the military-technical cooperation between the USSR and China.

Under current conditions, the further improvement of anti-aircraft missile weapons in the PRC began to be carried out on the basis of the "self-reliance" policy proclaimed in the country at the beginning of the 1960-s. However, this policy, which became one of the main tenets of the cultural revolution, with regard to the creation of modern types of rocket weapons was ineffective, even after China began to actively poach Chinese specialists who had relevant specialties from abroad, primarily from the United States . In those years, more than a hundred prominent scientists of Chinese nationality returned to the PRC. At the same time, work on the acquisition of advanced technologies in the military-technical field was intensified, and specialists from Germany, Switzerland and a number of other countries began to be invited to work in the PRC.

Simultaneously with the start of mastering the production of the HQ-1 air defense system in 1965, the development of its more advanced version under the designation HQ-2 was started. The new air defense missile system was distinguished by an increased range, as well as higher performance when operating in conditions of using electronic countermeasures. The first version of HQ-2 entered service in July 1967. 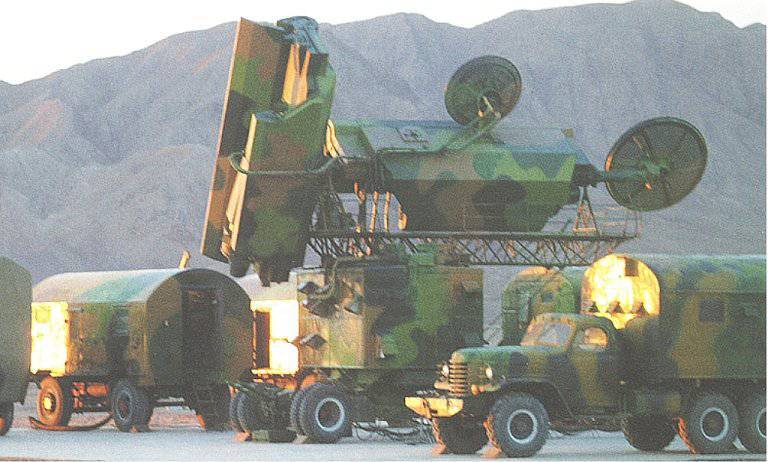 In the creation of the “Chinese air defense system” HQ-2, the war that was raging then in Southeast Asia contributed greatly. Despite sharp political differences, a significant part of Soviet military assistance to Vietnam was by rail through the territory of the PRC. Soviet experts have repeatedly recorded cases of missing samples of aviation and rocket technology during its transportation through the territory of the PRC. Thus, the Chinese, without disdaining banal theft, were given the opportunity to familiarize themselves with modern Soviet developments. 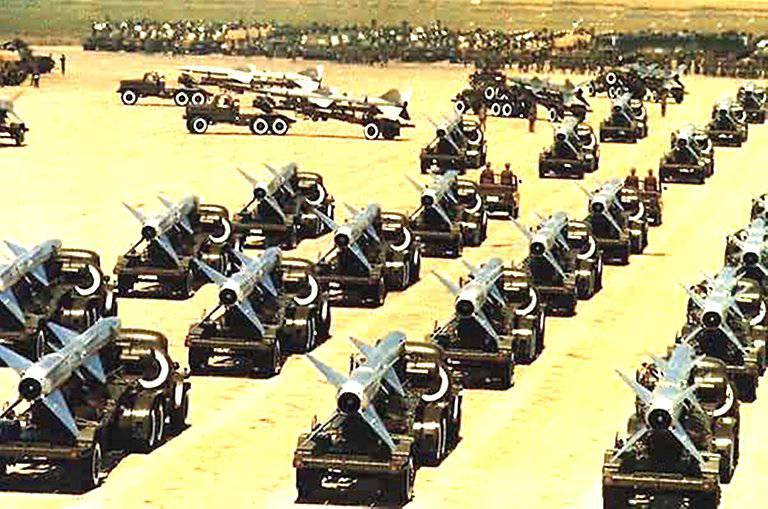 In the People's Republic of China, on the basis of the Soviet SA-75, three programs were carried out for the creation and production of air defense systems designed to combat high-altitude targets. These, along with the already mentioned HQ-1 and HQ-2, also included HQ-3, with a missile that was supposed to have a significantly increased range and speed of flight, specially designed to counter reconnaissance flights in the American supersonic high-altitude reconnaissance aircraft SR- 71.

However, only HQ-2, which in 1970-80's, received further development. repeatedly modernized in order to maintain its characteristics at a level consistent with the development of means of air attack. 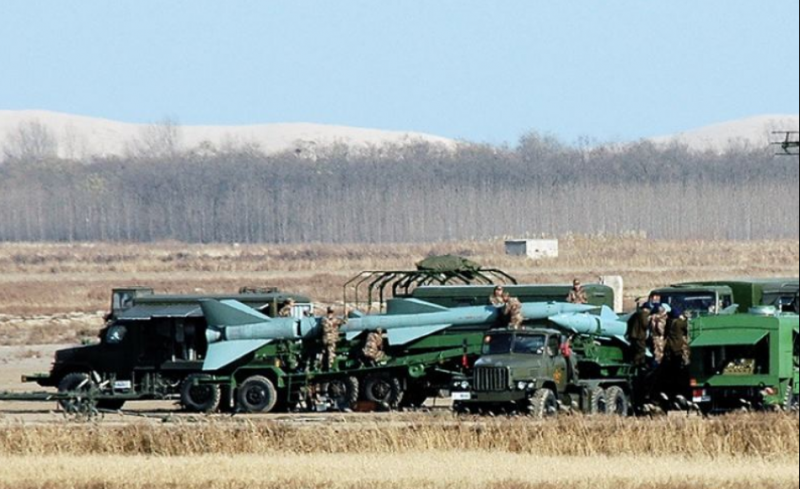 The NQ-2 ADMS division included six PU, 18 spare missiles, a Chinese copy of the P-12 detection radar, an SJ-202 guidance radar (a copy of the SNR-75), TZM, and other equipment. 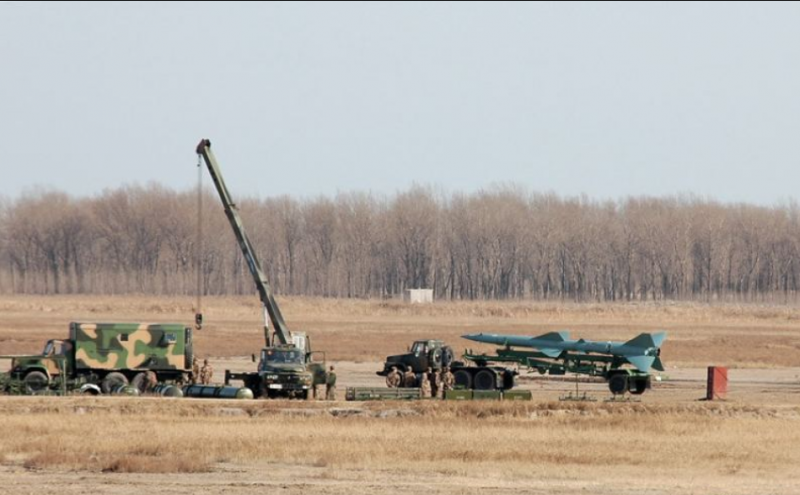 Work on the first HQ-2 modernization was launched in 1973, based on an analysis of the hostilities in Vietnam. Created taking into account the combat experience, the ZQK HQ-2А possessed a number of high-quality innovations and was adopted for use in the 1978 year. In general, the Chinese analogue of the Soviet C-75 ADMS repeated the path taken in the USSR with a delay of 10-15 years. 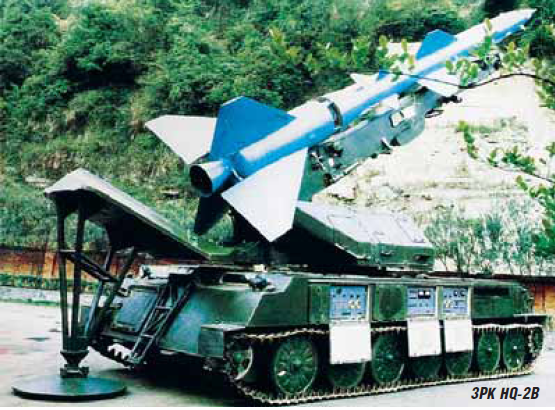 A further development of the NQ-2 air defense system was its mobile version - HQ-2В, which was started on the 1979 year. As part of the НQ-2В complex, it was planned to use PUs on a tracked chassis, as well as a modified rocket equipped with a new radio fuse, the response of which depended on the position of the rocket relative to the target. It was also created (or rather, copied from the Soviet missiles) a new combat unit, which increases the probability of destruction. A new propulsion engine with an increased burden was developed. This version of the air defense system was adopted in 1986 year. 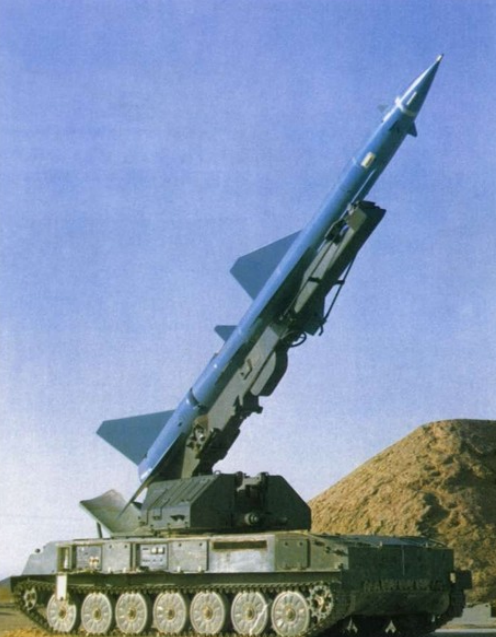 However, the truly mobile HQ-2В complex did not, the rocket fueled by fuel and oxidizer could not be transported to any significant distances on a tracked chassis. It could only be about increasing the mobility of launchers and their independence from the means of towing.

Simultaneously with the HQ-2В, the HQ-2J SAM system was adopted, which was distinguished by the use of a stationary launcher to launch the missile. Also, in the 1970-1980-ies, the development of anti-missile versions of the NQ-2 air defense systems, which were not developed further, was carried out. 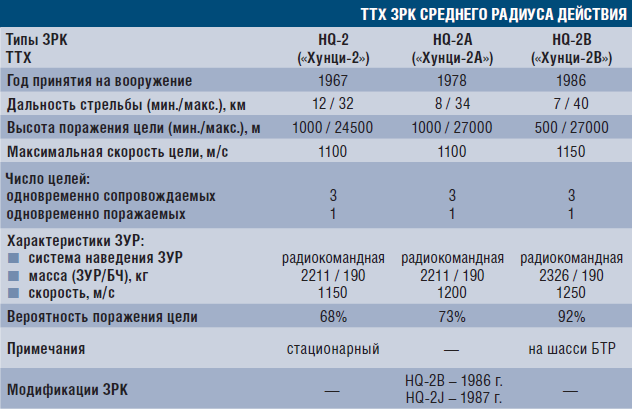 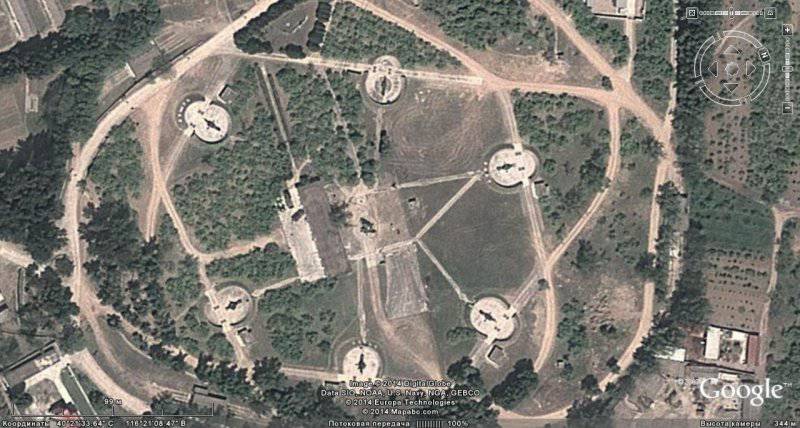 In total, over the years of production of the NQ-2 air defense system, more than 600 PU and 5000 missiles were launched in China. About 100 air defense missile battalions HQ-2 of various modifications for a long time formed the basis of the defense of the PRC. About 30 divisions were exported to Albania, Pakistan, Iran and the DPRK. 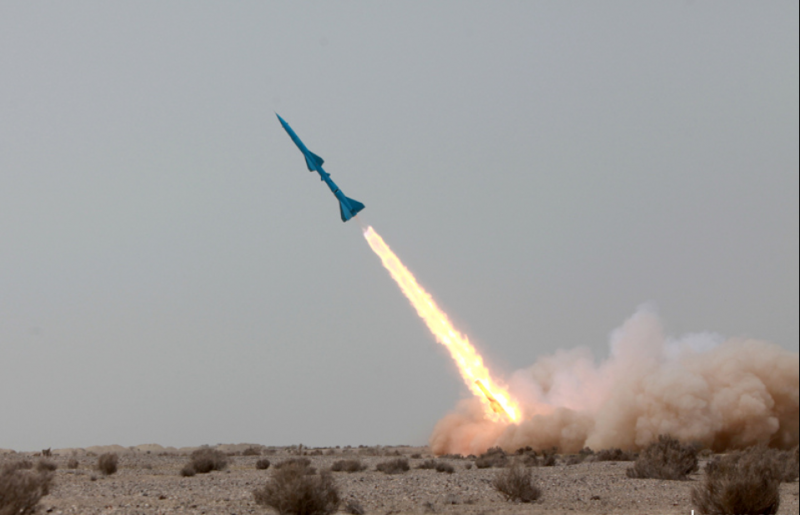 The NQ-2 SAM system took part in hostilities during the Sino-Vietnamese conflicts in the 1979 and 1984 years, and was also actively used by Iran during the Iran-Iraq war.

In the middle of 80-x in China, an operational-tactical missile M-2 (CSS-7), with a range of up to 8 km, was created on the basis of the HQ-150 rocket launcher. For this rocket, a single-block warhead with conventional explosives weighing up to 250 kg, cassette and chemical warheads were developed. These missiles (about 90 units) in the 1992 year were exported to Iran.

In turn, Iran took up the active modernization of the HQ-2J received from the People's Republic of China and set up production of missiles for them.

At the end of 1990, Iran presented new missiles called the Sayyad-1 and Sayyad-1A, the latest of which, according to official data, has an infrared homing system.

Currently, the People's Republic of China is actively replacing the outdated HQ-2 complexes with modern ones: HQ-9, HQ-12, HQ-16, C-300PMU, C-300PMU-1 and 2. The anti-aircraft missile forces of the People's Liberation Army of the People's Republic of China are armed with 110 — 120 anti-aircraft missile systems (divisions) and a total of about 700 PU. Of these, a little more than 10% are currently made up of HQ-2 SAM systems deployed in secondary directions. Taking into account the agreements recently concluded with our country on the supply of C-400 air defense systems to China, it is safe to say that in the next few years, the HQ-2 air defense system will be removed from service in China. 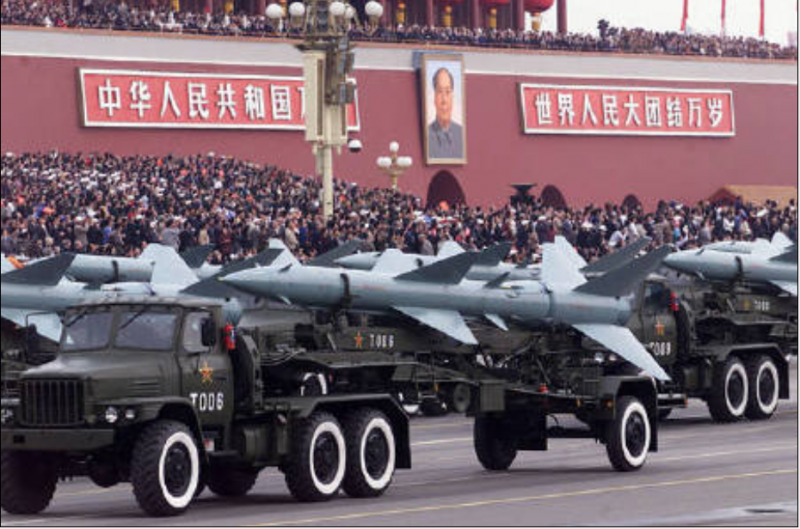 At the same time, HQ-2 outlived its progenitor C-75 by more than 20 years. In Russia, the latest systems of this type have stopped the combat duty of the early 90-x.