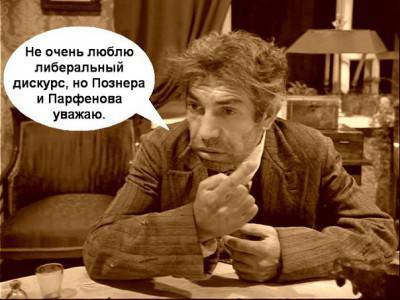 Maxim Kantor, an elite artist and writer, became famous in our book “Red Light” with an opinion, unusual for his liberal circle, about Stalin. A pier is not a serial killer maniac for whom we haven’t been able to pay the world without the outside world, but an effective leader of his era. But it was enough to smell fried in Ukraine, he immediately, as demanded by that liberal circle, addressed Putin with an appeal “Stop”:

“No ambition, no interest does not matter in the face of blasphemous war. The question is not about borders, not about missile bases, not about NATO. The question is so important that geopolitical calculations are near him. We cannot allow war between the Ukrainian and Russian peoples ... ”

But this peace-loving would not go with his message to Obama - someone with the hands of the Ukrainian nations who are openly patronized by him and kindles a Ukrainian fire! It kindles that, under such a threat, Russia should be returned to the cycles on which, under Yeltsin, it went before the United States. Why should Putin be stopped while doing this?

Yes, because you can understand that if Putin surrenders, Obama will have no one to fight with right away! And this is true: if every time, with the threat of war, one of the parties would forget its ambitions and geopolitical interests, there would be no wars in the world at all! As well as these forgetful sides themselves. Smirin Lincoln is his ambition, there would be no bloody US civil war. Humble before Washington before the punitive British expedition, there would not be the United States themselves!

But this, my opponents will immediately correct me, America! God ordered her to unleash war for the sake of her ambitions and to shed blood, but not Russia! This is actually the whole liberal idea in its dry residue, so to speak - to which Kantor returned, having spent a little while “for the Motherland, for Stalin”. He appealed to the public with an unorthodox look at the Soviet history - after which he spoke as the most orthodox liberal demanding our capitulation for any reason!

But here, it seems to me, there is nothing strange: the old “Hour hour principle” is in effect, since the heyday of our “free press” in 90's, driven into its foundation. Then "MK", ​​"AIF" and other "Izvestia" until the time they wrote who in that much, inspiring the public the illusion of their complete liberty. But he only beat the “hour of H” - for example, Yeltsin’s election in 1996, as everyone blew a trumpet in one voice: “Vote or lose! Yeltsin — or death! ”The task, under which they were released for temporary loose housing, was carried out — and returned again to their discord.

For the same notes, Kantor also played his part, sent from the camp of the liberals to the present “patriotic” field. By bloating away from their main dogma, the payment of indemnities to the West “for everything” by the same liberals, I gained fame of honest little. But only the “hour of H” came, hit the alarm for which he had sent. De, we must disarm before the heavily armed America, returning the status quo with which the last quarter century has been retreating under the humanitarian slogan "If only there was no war!"

At the same time, the "fraternal Ukraine" States used, as in my youth, the young hooligans: "Well, go and take that uncle!" The little fellow is rude to the passerby, his ear, after which the entire codla moves out of the doorway: Well, take off your watch! ”

But also from the antiwar side, as the whole world experience teaches, any deviation is the shortest way to war! The United States, like Hitler, never stopped before the defeat of a weak enemy - and did not bomb only those who, like Iran, China, North Korea, were ready to render selfless resistance. And today we have to retreat under this Cantor peacemaking - just pushing our borders, where a new conflict will be lit tomorrow, demanding new concessions. And the same literary typewriter of the liberals will again call upon to reconcile our ambitions and geopolitical interests - if only there was no war again. And so, what is called, ad infinitum. More precisely, until we are dismembered, as the former Yugoslavia - or as the current Ukraine, dismembered as a prelude to our further ambe.

However, on the occasion of the Ukrainian events, our press intellectuals for the most part nevertheless sang together in the opposite Cantor fashion - for Putin, against Obama. But I have no doubt that this rare unity befell them not by virtue of some confluence of astrals, but because Putin finally intercepted these settings for the “hour of H”. That is how they should have pressed their testicles with their leader, the Nightingale, - not that they would have ruined anyone in that much. Even Khakamada, the eternal opponent of the regime, deprived of this male clue, spoke at the meeting with Putin correctly - causing the anger of those who act on the other grips.

That's actually all the freedom of speech, acquired in all our democratic years. Where you will turn her dyshl - there and left; depending on the payment scenario, its singers are ready to serve both the fifth column and the very first of the patriotic ones. They can not stand the real loose-minded content categorically, immediately slipping into freedom in the service of the one who gives more.

The fish is looking for where it is deeper, and not by the ears of an intellectual who is in love with his Homeland, which is better for fish in the image of a fish. This or that branch of service is fame, exhibitions, grants, Booker and anti-Booker prizes; and the rejection of it is the bitter grass of oblivion. So the casket of the current intellectual protest or approval is revealed: who is feeding there, who is there.

Which, by the way, was not so fully in the USSR, where, with all the clutter, true truthful bearers were found - not for fear and money, but for conscience. But with the ensuing freedom, they swam away somewhere, giving way to such Cantors and Solov'evs, singing purely on the notes indicated to them. Maybe when they sing as it should, this is not bad - but what is the lesson for all the others, who, equaling themselves to the nation’s thin conscience, are less and less willing to honestly serve the Motherland!

That is, something we have with this freedom is not gone, but why - the devil knows. Probably, the authorities are somehow guilty: they didn’t so tied or untied this intellectual flock. Only then the question is: what kind of intelligentsia is that, without a leash, runs immediately to the fifth column and is ready to serve at least to whom for a good surcharge!

Ctrl Enter
Noticed oshЫbku Highlight text and press. Ctrl + Enter
We are
Does Russia have a “B” plan for Ukraine?About Stalin and Khrushchev
Military Reviewin Yandex News
Military Reviewin Google News
23 comments
Information
Dear reader, to leave comments on the publication, you must sign in.