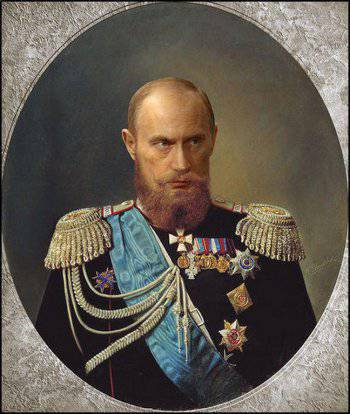 I believe that now we have witnessed a turn of the geopolitical stories, turning, which historians of the future, perhaps, will be compared with the decline of the Roman Empire. Vladimir Putin began to act, and his actions are directed not only against Ukraine. And not only against Eastern Europe. And even, quite likely, not only against the dominant positions of the USA in the world.


There were times when the USSR was an "evil empire", the unholy Golgotha. But it remains in the past. Now, at the turn of 2013 and 2014, Putin, in his annual address to the nation, said: “Many Euro-Atlantic countries have actually taken the path of abandoning their roots, including Christian values, which are the basis of Western civilization ... to one level a large family and same-sex partnership, faith in God or faith in Satan ... This is a direct path to degradation. "

This speech of his time approximately coincided with the adoption in Russia of a law banning the propaganda of homosexuality and became a kind of gunfire against the sexual heresy of the West and its underlying moral relativism.

In another speech, also directed against relativism, Putin stated the following: “People are now being asked to… obligatory recognition of equivalence, as it does not seem strange, of good and evil, opposing concepts”.

Then the President of Russia fired on cultural diversity: "Today, in many countries, the norms of morality and ethics are being revised, the national traditions and differences of nations and cultures are being erased."

We are currently watching the start of the Russian cultural war 2.0. In its document entitled “Basics of the State Cultural Policy”, the Kremlin doubles the rate and writes the following: “Russia should be viewed as a unique and original civilization, not reducible to either the“ West ”or the“ East ”. The short formulation of this position is the thesis “Russia is not Europe”, confirmed by the entire history of the country and the people. ” The document further states that Russia must “abandon the principles of multiculturalism and tolerance” and reject cultural projects that “impose value norms alien to society”.

No, this is not the Russia of your grandfathers. Rather, it is your great-grandfathers Russia.

I suspect that now in Russia there are several different processes. Those 20 years that have passed since the end of the Cold War were a period of relative cooperation between Russia and the West, but you can’t look for your own place, agreeing with the world cultural hegemon - you can’t be the leader of an orchestra playing the second violin. Therefore, Putin defines his nation as a non-moral-wild West. In addition, he understands well: to unite people around him, it takes a scarecrow - your Eurasia or “Napoleon”, which will come, kids, if you are disobedient.

Meanwhile, Putin is not going to get involved in the Cold War again. And he is not at all a Bolshevik of the old school from the ranks of the KGB, as many column authors like to portray him. He is smart enough to understand that Marxism - as today's teenagers would say - is already exhausted.

Most likely, he wants to be the next king.

What is my theory? I believe that Putin not only wants to restore the lost greatness of Russia. He sees for himself the opportunity to become a historical person.

It is worth noting that in order to go down in history, it is not necessary to be good: the Roman statesman Cicero called Julius Caesar an “ambitious villain”, but much more people know the name of Caesar than the name of Cicero. Let's try to imagine what Putin’s calculations might be. For a long time, the West was a world cultural legislator, spreading more and more non-Christian values ​​in all corners of the planet. Of course, not everyone listened to him. Islam advocates want nothing to do with these values, but they are Muslims; Sub-Saharan Africa is rebelling against them, but it lacks influence. As for South America, it, on the one hand, lacks influence, on the other - it comes in confusion. Meanwhile, China, although it is now gaining momentum, is a country inhabited mostly by atheists who are not inclined to take part in a cultural war.

But here comes the second Vladimir the Great.

Now there was an acute shortage of the guardians of the values ​​of Christianity, and Putin realized that he had a good opportunity to take advantage of this. China will not do this, Africa will not, and South America will not and will not. However, like Vladimir the Great, who baptized Kievan Rus, like Charlemagne, who helped Christianity to gain a foothold in Europe, Putin was able to independently raise this cross.

And the West continues to help him in this. Our Marxists from culture continue to go ahead, smell the blood and are not going to stop. They will continue to load us into a state of oblivion, force us to take a lying position, make everything relative, turn into a joke, and convince us of the uselessness of values. Even now, having scored another big nail in the coffin of the institution of marriage, our militant secularists are beginning to take the first steps towards the legalization of pedophilia and bestiality. This is the Lucifer army movement.

As for Putin, he, on the contrary, assumed the role of defender of Christianity. While we are in the process of degradation, a Russian star will rise in the sky. Putin understands that the West is in decline. He observes demographic trends, as a result of which the United States is gradually turning into a nation of Latin Americans, and Western Europe into a Muslim continent. He knows that a new great power should appear in the future, and this will be either Russia or China. And he understands well which cards he must play in order to win this game.

Of course, we can argue for a long time about whether the concept of a defender of Christianity is a strategy or just a tactic, but it is so reasonable that Putin simply could not use it. Just think what benefits it can bring - starting with the justification of the expansionist policy of Russia. If you were Russian, then perhaps the idea that the West has become decadent, depraved, exhausted and pampered does not, in your view, justify the doctrine of Russia's destination? Doesn't human nature have the assurance that your moral superiority gives you the right to dominate? Note that it was this theory that served as an excuse for the imperialism of the colonial powers: they carried civilization into the world of darkness. This is what we are doing to this day, calling secular values ​​a standard. How often have we heard that the invasion of the Islamic "camp" is justified by how its rulers oppress women and how intolerant they are? Arguments can be different, but the desire to take the position of moral superiority is present absolutely everywhere.

Next is to consider international relations. Once the USSR fought with us for world influence, and where they had previously tried to sow the seeds of Marxism, now they can spread the ideas of moral purity. Resisting a decadent Western secular imperialism can help Russia acquire many friends in Africa and even in the Middle East, with much of the Far East taking the side of the dominant power.

Finally, even if Putin is in fact an atheist, he certainly knows that in order for Russia to prosper, it is necessary to renounce all Western secular and hedonistic isms. How did he understand that? According to the Soviet defector Yuri Bezmenov and some others, it was his former Marxist comrades who inspired these movements in the West to undermine the foundations of our civilization.

However, we are perfectly able to independently undermine the foundations of our civilization, and Putin is now more concerned about creating his own. Pat Buchanan (Pat Buchanan) recently wrote about this, noting that Putin may well perceive his state as the “Third Rome”:

“The first Rome was a sacred city and the heart of Christianity, which surrendered to Flavius ​​Odoacer and his barbarians in 476 AD. The second Rome was the Byzantine Constantinople (modern Istanbul), which was in the hands of the Turks in the year 1453. The successor of Byzantium, the third Rome, the last Rome of the Old Believers was Moscow.

Putin is promoting the idea that Moscow is the righteous city of modern times and the command post of the Counter Reformation, fighting against the new paganism.

... Putin claims that Russia will proudly lead a new ideological struggle between the corrupted West under the leadership of the United States and the traditional world. "


It is worth noting that the word "king" comes from the Latin word "Caesar". And although Putin may be just as happy to become a new Julius or Augustus, like Konstantin, I am sure that he no longer has a passion for Marxism. This means that you will have to play the second violin again - and the last thing the Russians would like to do now is to be like us.