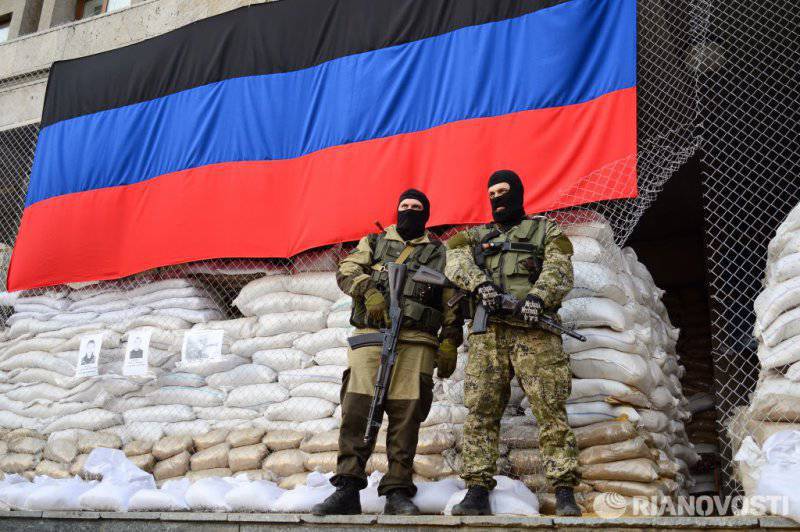 The southeast of Ukraine, organized by the Washington Bandera coup in Kiev, responded with the anti-Bandera revolution in the Donbas. The revolution is, in fact, a more powerful thing than any putsch. “Such a theory, and the tree of life is forever green” ... a special revolutionary tree, and the dry theorists of “controlled chaos” in Ukraine will soon realize this. In Russia, and in Ukraine, they know what a “revolutionary process” is not from theory, but from its own historical experience.

As is known, “controlled chaos”, an intellectual product of the Institute of complexity in Santa Fe (USA), is a necessary environment for a coup in an Americanized country, under the guise of changing some “dictatorial regime to a democratic one” in it. But this environment, and the coup itself, are, in turn, the fuse for a real revolution. When she comes into her rights, the entire control of the puppet masters for “regime change” suddenly refuses, and they get an unexpected result. So it happened in the countries of the "Arab spring" of Libya, Syria, Egypt - or did the Americans get what they wanted there? Why should Ukraine be any different?

Understanding this, it is possible to predict the development of the revolutionary situation in Ukraine. Putschist Kiev will stupidly bend its “pro-Ukrainian” Bandera line, because the Americans demand it from it. Washington allegedly wants to keep the achieved result, “its regime”, and blackmails all those who adhere to common sense and “interfere” in the affairs of “independent Ukraine”. But gives her "for life" insignificant 58 million dollars! (Compare: Russia gave Yanukovych 3 billion at once.) What does this mean? - it is easy to guess from one time: soon he will “throw” Ukraine, but for now ...

The economic situation in the country will deteriorate, and the revolution in the South-East of Ukraine will, accordingly, flare up. And “October” will come to replace “February”, although this time not in October.

In practice, it looks like this: the main presidential candidate, Petro Poroshenko, declares to the Donbas: “No negotiations, only power.” It is clear that he “stupidly” voiced the installation of the CIA-SBU, but ... the trouble of the putschists is also in the fact that in Kiev, thanks to the stripping of the Americans, there are no other politicians left who can respond adequately to the development of the situation. They become a nuisance when there is a general American line.

Still “living politicians” have moved, or are moving, to the South-East, and the revolution gets its leaders, and the strongest in this situation. The most promising politician of the revolution is now Oleg Tsarev, and he is already in Donetsk! Like Lenin in 1917, in Petersburg.

Washington, meanwhile, shakes up its Kiev regime in order to “eliminate unpleasant accidents,” and this brings confusion into the Bandera camp. They see Tymoshenko as such an “accident” in connection with her unstable psyche, and the long-standing gas connection with Putin.

Tymoshenko was planning a visit to the United States, but members of Congress defiantly refused to accept it. She was naturally offended and canceled her visit. And I realized that she was again "thrown" in the presidential campaign: Washington made a bet on Poroshenko. However, what a game of "last names", someone just laughs at us, not noticing the obvious signs ...

But Tymoshenko is a “lady with a scythe,” she sometimes does not answer for herself, and easily gives orders for a special operation to party member Avakov, even Sashko Bily (Muzychko) could not be saved ... And Poroshenko is her only real opponent in the presidential race. What if “separatists” kidnap him, for example, then Tymoshenko will be the only candidate for the presidency!

And the “separatists” they are ... they can, for example, kidnap Poroshenko in order to exchange him for the people's governor Gubarev ... No, such a combination would never come to a normal person, but “svidomye revolutionaries” are “onizhedeti” ... So beware Poroshenko!

And to the escalation of violence in the Donbass led to the kidnapping of activists of peaceful demonstrations by CIA-SBU agents. Stupid tactics of "decapitating the protest"! When the score went to tens, people took up weapon, the uprising began, the seizure of state institutions, following the example of the Kiev Maidan. Now foci of armed confrontation have been formed in the Kiev junta in Slavyansk and Kramatorsk, but as a whole in the Donbass there is still dual power. We remember how the dual power ended in St. Petersburg under the Provisional Government in 1917, but Washington does not remember, and this is our historical advantage.

... Russia, apparently, will slowly be drawn into the Ukrainian revolution. She has already begun to get involved, conducting military exercises in peak of punitive expeditions of the junta. Then there will probably be volunteers who will come to the aid of the People’s Ukrainian Republics, and Russia will not interfere with them. Further - more, until Kiev again becomes the mother of Russian cities. What will the states say? And they have already said everything that they could ... And they gave 58 million dollars to the revolution in the Donbas.

“They put us in a difficult position,” says Foreign Minister Sergei Lavrov, noting the fact that is shocking with its cynicism: US Vice President Joe Biden holds a meeting in Kiev as head of state, sitting at the head of the table, with Kiev temporary rulers on each side. Secretary of State John Kerry scares Russia: “The window of opportunity for Russia to change course is closing ...” But revolutionary windows are opening! “Stupid” they are all there in America, laughing satirist Mikhail Zadornov, except for eighteen geniuses. Neither Kerry, nor Biden, nor Obama are among them ...