April 28 2014
35
On the plans of the North Atlantic alliance to Ukraine today does not say is that lazy. The desire of the real owners of NATO to step over the eastern borders and introduce into their field the countries of the post-Soviet space (not counting the Baltic states, which are already in the alliance) is obvious. Why step over? The answer is simple: in order to realize a strategy that Madame Hillary Clinton voiced not so long ago when she was head of the US State Department. Clinton announced that the United States will not allow the formation of integration processes in the territory of the former USSR. Explained more than that, isn't it?


Proceeding from this state of affairs, one can say that the draft of the States “merged” on the air by Mrs. Clinton is still very much alive today. However, this project experienced a serious upheaval at a time when Ukrainian President Viktor Yanukovych suddenly announced the suspension of “integration” with the European Union, making it clear that Ukraine is not satisfied with the conditions of such “integration”. For the “friends of Ukraine” from the West, this move by Yanukovych was a signal that if Yanukovich stayed in his chair for another time, then the United States and NATO could lose Ukraine completely. After all, this mini-demarche of Yanukovych was not the first sign. The election campaign itself was based on the development of integration relations with Russia, the Customs Union and the declaration that Ukraine will not sign any agreements on the possible accession to the North Atlantic Alliance. And if, after winning the election, Yanukovych systematically “forgot” about his promises, then by the end of 2013, the situation had arisen that he urgently needed to remember about them, but it was too late for Viktor Fedorovich. “Friends of Ukraine” have already pressed the drain button, and the Ukrainian president barely managed to carry his legs to where it’s known.

Obviously, the very fact that Viktor Yanukovych came to power in 2010 year, let's say, strained the West. After all, in fact, Yanukovych had to start working almost from scratch - before him, the West had a more than positive attitude towards its plans on the part of the Ukrainian authorities. This is evidenced by the materials that were at the disposal of the Agency of Federal Investigations. FLB.ru. These documents once again prove that the project on the artificial introduction of Ukraine into NATO and its final rejection from Russia and other CIS countries is not a fairy tale at all. 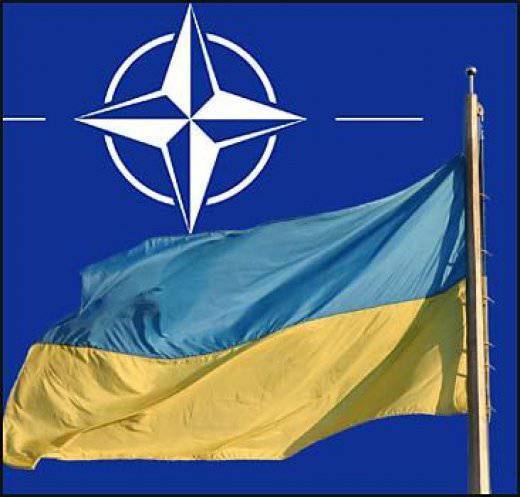 One of the documents: application to the presidential decree No. 289 / 2008 of 1.04.2008 year. Despite the date of the publication of the decree (1 of April), the document does not look comical at all, since it contains the main provisions for the development of Ukraine’s integration with the North Atlantic Alliance. The Appendix carefully describes what principles Ukraine is going to put into service in order to be closer to NATO. Moreover, some of these points shed light on the events that are taking place in Ukraine today, although more than 6 years have passed since the signing of the document by Mr. Baloga (head of the secretariat of the president of Ukraine).

Here are some interesting points of this Application from the “Events” section.

If you look at this point carefully, it turns out that Kiev was preparing for the reform of the Ukrainian army with a view to retooling with the use of Western weapons. If we consider that the Ukrainian military-industrial complex is focused on industrial relations with Russia, it turns out that the then Ukrainian authorities offered NATO to break these ties. As it turns out, some representatives of those authorities in power today. So, for example, such a person as Arseniy Yatsenyuk, who in 2008 (until November) served as the Verkhovna Rada chairman, had a hand in the preparation of documents on Ukraine’s cooperation with NATO, that is, he was, so to speak, the main Ukrainian legislator under Yushchenko. In this case, it is clear why Arseniy Yatsenyuk was the one who was promoted by Western “friends of Ukraine” to the premiership immediately after the “victory” of the Maidan ... After all, he had to continue to lead Ukraine towards NATO, which he is trying to do today.

Yulia Tymoshenko, who occupied the post of Prime Minister in 2008, played the role of presidential candidate in Ukraine, played a significant role in the preparation of documents on the expansion of cooperation with NATO.

P.4 Ensure the further effective activity of the Ukrainian peacekeeping contingent within the Ukrainian-Polish task force UkrPolBat of the International Security Forces in Kosovo.

P.5. Continue to ensure the participation of Ukraine’s peacekeeping personnel as part of the NATO mission in the Republic of Iraq.

P.6. Develop proposals for increasing the number of officers of the Armed Forces of Ukraine at headquarters positions in the multinational force contingent in the Republic of Iraq.

P.7. To work out the issue of expanding the participation of Ukrainian peacekeeping personnel in the International Security Assistance Force (ISAF) in the Islamic Republic of Afghanistan in accordance with the Decree of the President of Ukraine of January 26 2007 No. 47 “On sending Ukrainian peacekeeping personnel to participate in the International Assistance Force security in the Islamic Republic of Afghanistan. ”

P.10 Ensure the participation of the Ukrainian contingent in the NATO Active-effort antiterrorist operation in the Mediterranean.

Annex paragraphs from another section, which again make it clear that the Ukrainian authorities were pushing the country toward rapprochement with NATO at any cost.

P.4 To consult with the military and economic structures of NATO and bilateral cooperation with the member states of the Alliance on topical issues of the use of "offset" practice in the procurement by Ukraine of weapons and military equipment.

In this case, the term “offset” means that Ukraine pledged to purchase military equipment from the countries of the North Atlantic Alliance and at the same time wanted the NATO countries to invest part of the funds received in the Ukrainian economy. Obviously, the funds that NATO allocated (was going to allocate) to Ukraine under these agreements did not go far to the development of the country's social sphere, but to the involvement of the military bloc in Ukraine itself, since it was this scenario that was best suited for the United States. From here, by the way, are those more than strange tenders on public procurement sites of foreign countries that openly led to the emergence of NATO infrastructure in the regions of Ukraine. One of these tenders is the sensational repair of the Sevastopol school by an American company. After the repair, the school was to become one of the objects of the US Navy on the Crimean Peninsula. And the fiery speeches of Ms. Tymoshenko that the Kharkov agreements on the Black Sea stay fleet Russia in Crimea urgently needs to denounce - another proof that Yulia Vladimirovna, having taken part in the work on the document on the integration of Ukraine and NATO, received in her TSU from Washington - to worry the sea under the Black Sea Fleet of the Russian Federation. But, apparently, Tymoshenko put too many “bonuses” in her pocket, and therefore today, no matter how hard she tries to catch up, she can’t get the US’s favor.

Here are some more noteworthy points of the Application:

P.2.2.6 Cooperation with NATO in the field of air traffic control and airspace safety.

At this point, things are named by their names:

Implementation of the strategy of European and Euro-Atlantic integration of Ukraine, including the desire to get NATO membership, requires the creation of an effective model of the security sector, guarantees of the tasks of identifying, preventing and localizing potential and real threats to national security. The structure of the security sector of Ukraine must meet the new political and economic conditions and the European system of national security.

P.2.3.7 Reform of the Ministry of Internal Affairs of Ukraine

The reform of the Internal Troops of the Ministry of Internal Affairs of Ukraine is carried out in the context of the reform of the security sector of Ukraine and is aimed at implementing the military doctrine of Ukraine, approved by Decree of the President of Ukraine dated 15 June 2004, No. 648, in terms of bringing combat capabilities, level of combat capability, training and comprehensive support of the Armed Forces of Ukraine and others military forces in line with defense needs and increased compatibility with the armed forces of NATO and EU member states. This takes into account the experience of similar formations of the leading states of the world (gendarmeries of the French Republic, the Turkish Republic, Romania, the Carabinieri of the Italian Republic, the Spanish Civil Guard and others).

That in Ukraine now "gendarmerie", and "NAZI-guard", and "carabinieri" on the armored personnel carrier. And also the United States, looking after the Ukrainian borders. Dreams Come True…

Ctrl Enter
Noticed oshЫbku Highlight text and press. Ctrl + Enter
We are
Auto racing for real menSituational analysis of the death of the MH17 flight (Malaysian Boeing 777), made on the basis of engineering analysis from 15.08.2014
Military Reviewin Yandex News
Military Reviewin Google News
35 comments
Information
Dear reader, to leave comments on the publication, you must sign in.