How American "partners" of information monopoly are stripped 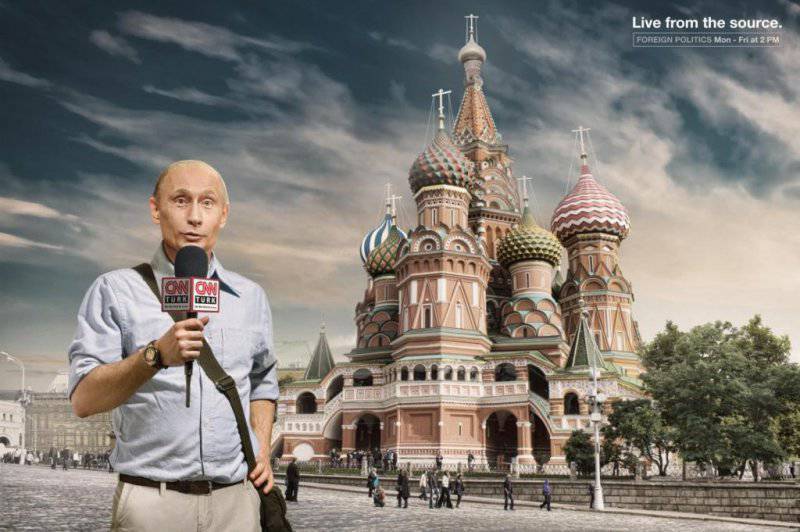 “The Empire of Good”, and I am talking, of course, about the United States of America, suddenly began to guess that its affairs with a monopoly on the planet were getting worse and worse. Over the last 23 of the year, Washington finally believed that the “magnet” could have one pole, although physicists insisted ...

The presence of the second pole of the modern world, which is becoming ever more clearly manifest, was felt by the States not only in the political plane, but also in the information plane. And if the US has already had time to get used to the second economic pole in the form of China, then Washington turned out to be informational and political opposing (primarily from Russia, of course), which is no secret. However, the White House will have to get used to the new state of things, and the sooner the better. I got used to economics with China, and everything here at the “partners” should work out. We understand: the process is painful, it will hurt in some places, side effects and all that, but what is the result! - a complete recovery from the delusions of grandeur and one’s own infallibility with the simultaneous ability to perceive the situation as it is and not as seen through the thick muddy lens of American clumsy “diplomacy”.

The cure for megalomania grandeur the United States takes oh how reluctant. I myself would not take Washington at all, but the States are forced to open their mouth wide due to the evolving situation, uttering their “Aaaaaa”, and at that very moment the treatment pill is placed in the mouth of the patient.
And such pills recently, as it was found out in the States, come from one direction. The State Department set the task to determine which one. Delivered and identified. His version was announced by the head of the American foreign affairs agency, Mr. Kerry, who said that the whole thing was about the Russian “Putin’s propaganda”, which was broadcasted by Russia Today TV channel.

Russia Today TV channel was organized to embody President Putin’s fantasy about what is happening, about his role in the world. Almost all of the airtime they devote to propaganda and distortion of what is happening in Ukraine.

Based on this statement of Mr. Kerry, we can draw the following conclusion, and also wonder. John Kerry spends all his time to monitor RT's on-air routine, and when you consider that RT is a 24-hour broadcasting channel broadcasting its programs in Europe, North and South America, and Asia, when, in that case, does Kerry do diplomatic work directly? .. Judging by his statements and “movements” of the United States in the international arena, the United States does not engage in any diplomacy at all. Well, in twenty-three years, in fact, you can forget about what diplomacy is and why it exists at all ... That is, there is a chief diplomat in the USA, he is appointed, and no one can answer the simple question: a what for? Kerry himself can not. He mumbles some kind of programmed nonsense about the protection of democratic values ​​against the background of hundreds of American military bases (according to the most modest estimates of their at least 800 abroad), with which, excuse me, the planet is stuck from Greenland to the Philippines. Wards Kerry cookies baked for distribution. Judging by his own words, he himself does not miss a single broadcast of the Russian TV channel. In general, they are looking for classes for themselves in order to at least somehow work out the wages that they are provided by the American taxpayers.

Margarita Simonyan, the editor-in-chief of this channel, immediately responded to the statements of John Kerry about the “propaganda” essence of RT:

It is surprising that in this difficult and humiliating time for his homeland, Secretary of State Kerry has nothing to worry about except for our TV channel.

Yes, in principle, nothing surprising ... An American official, as we have already found out, is simply looking for an object to apply his forces - he is looking for an outlet for potential, which is squeezed by American “exclusivity”.

Margarita Simonyan, as editor-in-chief, decided to demand an apology and clarification from the State Department about the words spoken by Kerry. Margarita, let me express my humble opinion: yes, this is not necessary. Even the opposite - let Kerry say more, let him create absolutely free advertising to the Russian mass media in the world. After all, many people in the United States and in Europe and around the world are well aware that if the State Department has to say that some kind of media doesn’t like it, how to say it, then this media should be paid attention to, It means that the information presented by such media is objective and important. And if viewers (users) all over the world remember that the State Department is positioning itself as the main guarantor of world freedom of speech, then any attempt to put pressure on the media will eventually turn against the State Department itself. So Russia Today TV channel needs to use it, while the “client” (this is about Kerry) is “warm”.

And it enjoys, but how it uses! A few days ago, the Russia Today correspondent at a briefing at the State Department asked the official representative of the US foreign ministry, Jennifer Psaki:

Is it a coincidence that two times after the visit to Kiev of US officials, first John Brennan and then Joe Biden, the authorities sent troops to the south-east of the country.

And psaki once again sat down in a puddle, giving out at first something like: you copy Lavrov’s false statements, and then completely declare: let's go to the next question ...

As they say, viva freedom of speech in gosdepovskom its understanding! Glory to democracy!

Psaki is not the first time demonstrates her lack of professionalism, which is clearly manifested at the very moment when she has to answer questions from journalists of the Russia Today TV channel. Here is another one of these episodes. The official representative of the US Department of State on Twitter gave the following text:

Stop shooting in Simferopol. It is clear to everyone that Russia was the first to shoot, and it needs to show restraint.

At the briefing, RT correspondent Anastasia Churkina (it looks like the Churkin family turns into a waking nightmare for American officials) asked Jen Psaki about how she knew that it was Russian citizens who were shooting at?

Psaki:
The Russian side penetrated the territory of the Ukrainian base. This causes our concern and demonstrates their level of aggression in this case. Events seem quite obvious to us, and we only expressed concern about the messages coming from the scene. We don’t seem to be credible statements by the Russians that the aggressor was someone else or the Ukrainians, given that it was the Russians who entered the base.

RT correspondent:
Russia did not declare this. She stated that it was a provocation, whereas you claim that it is obvious that ...

Psaki did not give to finish, using his usual: it seems to me that you can move on to another question ...

And again, brave freedom of speech a'lya psaki!
One gets the impression that Russian journalists have pretty exhausted Jennifer, and therefore she “dripped” on to her boss on RT. Like, is it possible to somehow take and speak on behalf of the State Department, accusing RT of propaganda? Yes no problem, Kerry replied and spoke, adding RT rating and US information headache ...
Speaking of American headaches. In Germany is considered petition that the country began broadcasting Russia Today TV channel in German.

In total, about 100 of millions of Europeans in different countries and regions speak German. Therefore, broadcasting “Russia Today” in German would become an important aspect as an informational alternative, because many Germans are not good enough in foreign languages ​​to understand the English-language broadcast of the channel, as well as broadcasting in other languages. The laws of Germany encourage freedom to receive information through foreign channels, including in German, in order to better understand what is happening in the world.

Signatures for the petition are collected by September of this year. To date, about 20% of the required amount has been collected to consider the petition by specialized German officials.

RT abroad broadcasts in English, Arabic and Spanish, making more than significant competition for such TV channels as CNN or BBC, and giving foreign citizens the opportunity to perceive information objectively. The State Department is indignant ...

Ctrl Enter
Noticed oshЫbku Highlight text and press. Ctrl + Enter
We are
Results of the week. "I will tell everyone how far the PZh figurine has brought the planet to it"Strangulation: the context, conduct and consequences of the American naval blockade of China
Military Reviewin Yandex News
Military Reviewin Google News
127 comments
Information
Dear reader, to leave comments on the publication, you must sign in.