In OSCE declare, that in Slavyansk not their observers are captured 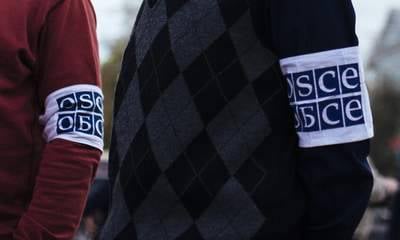 The Organization for Security and Cooperation in Europe (OSCE) noted that a military mission was detained in Slavyansk, which arrived at the invitation of Ukraine in accordance with the Vienna Document 2011 of the year, the website reports.Russian spring".


The people captured in Slavyansk are not OSCE observers. It is reported by the press service of the organization. "All members of the OSCE special observation mission and the election observation mission from the ODIHR are safe, no one has disappeared," the statement said.

The organization noted that a military verification mission was detained in Slavyansk, which arrived at the invitation of Ukraine in accordance with the Vienna document 2011 of the year. It is reported that it consists of eight people, four of them are German citizens and one each from the Czech Republic, Denmark, Poland and Sweden. “They are not OSCE observers, but sent by OSCE countries within the framework of the Vienna Document,” the organization explained.

Earlier, the Interior Ministry confirmed the information of the Ministry of Foreign Affairs about the seizure by militias in Slavyansk (Donetsk region) of representatives of the Organization for Security and Cooperation in Europe (OSCE). According to a false report from the ministry’s press service, today at 11: 40, at the entrance to Slavyansk from Kramatorsk, unknown people stopped a bus carrying 13 passengers - seven OSCE representatives, five employees of the Armed Forces of Ukraine and a driver.

Earlier, the people's mayor of Slavyansk, Vyacheslav Ponomarev, said that an OSCE minibus was detained by militia fighters at one of the roadblocks. According to him, the militia was embarrassed that the mission consisted of active officers of the European NATO member countries, as well as the Ukrainian General Staff.

- The OSCE mission cannot be conducted by personnel military. In addition to military insignia, these people were found to have maps with marks of all roadblocks, which is evidence of their intelligence activities under the cover of the OSCE mission, ”says Ponomarev. - In addition, during the search they found expansive ammunition, the use of which is prohibited in many countries and used by the militants of the Right Sector.

- Such people penetrate the city in order to sabotage. The junta is screwed up to such an extent that it does not know what else to think of. Their comments are insane. It would be better if they wrote fantastic books, - Ponomarev stressed.

Security specialists of the national militia check the detained members of the OSCE mission, by Saturday morning it will be decided to work in the region.

Resistance activists have already found a page in фейсбук one of the detained NATO military.

The United States calls for the release of representatives of the OSCE mission detained in Ukraine, but do not have confirmation of media reports on this topic, State Department spokesman Jen Psaki said at a briefing, reports RIA News.

"We are deeply concerned about reports that unknown armed people have kidnapped a group of inspectors," said Psaki.

According to her, the OSCE staff are located in a building controlled by pro-Russian forces. However, the representative of the State Department admitted that he knew about what was happening only from media reports.

“If this is true, we strongly condemn these actions and call for their immediate release,” she said.

According to Psaki, the State Department believes that Russia can contribute to the release of the detainees, using its influence.
Ctrl Enter
Noticed oshЫbku Highlight text and press. Ctrl + Enter
We are
The action “Military service under the contract is your choice!” In Rostov-on-Don: future contract servicemen, exhibitions and “Russian Knights”
Military Reviewin Yandex News
Military Reviewin Google News
44 comments
Information
Dear reader, to leave comments on the publication, you must sign in.