Radicals of the "Right Sector" joined the military in southeastern Ukraine, but the Interior Minister denies this information

April 25 2014
63
In eastern Ukraine, punitive operations continue. Moreover, it is very difficult to understand the true motives of those who gave orders for an offensive. There is a thought that either this is someone's attempt to ensure the general Ukrainian elections, having preliminarily crushed Slavyansk at all costs and thereby clearing the ground in the rally south-east rally, or, conversely, trying to stir up a civil war to finally disrupt the elections announced in the country . 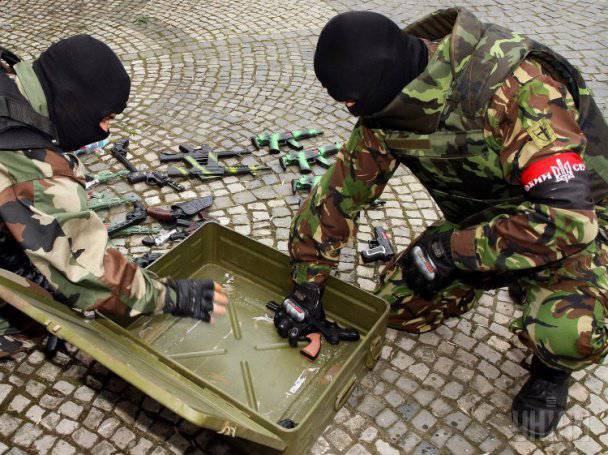 And all this is happening against the background of the statement of the nationalist leader Yarosh that it is possible to speak with the eastern regions only in the language of force. Apparently, he was not so pleased that the residents of Lugansk did not want to let him into the city. Meanwhile, the authorities in Kiev stubbornly assert that in the east of the country "anti-terrorist" operations are being conducted against "separatists". At the same time, one can observe on the screen picture how the armored vehicles of the Ukrainian army with battles enter the rebellious Slavyansk.

As for the Geneva agreements signed the other day, then, apparently, for Kiev they remain an empty declaration. Still, the current Kiev authorities are preliminarily discussing any actions with their overseas mentors. No wonder Washington has already transferred more than six million dollars in support of the Ukrainian army, and another two million in line. But is this help limited only to money?

At the same time, it is alarming that the military operation in the north of the Donetsk region was announced on the same day when the CIA chief was in Kiev. Moreover, it enters the active phase precisely when Vice President Biden arrives in the country on an official visit. Thus, now not only the Ukrainian army and the National Guard forces are tightened in the east, militants of radical right-wing groups have also joined.

So, today the leader of the nationalists, Dmitry Yarosh, said that military units in the south-east of Ukraine are now replenished with extremist fighters from the Right Sector. Earlier it became known that the headquarters of this organization was moved to Dnepropetrovsk from Kiev, so that it was more convenient to monitor the situation in the Donbas.

Recall that Dmitry Yarosh is not only the leader of the nationalists, but also a candidate for the presidency of Ukraine. According to him, all members of the “Right Sector” are ready to replenish military units and take a direct part in the formation of a number of militarized battalions.
Yarosh also personally promised to provide any support in the formation of the battalions "Slobozhanshchina", "Dnepr" and "Donbass". If necessary, members of the "Right Sector" will be involved in other military units.

Meanwhile, the nationalist leader denies that his organization is sponsored by foreign partners. Although, he immediately clarified that he would not mind if they provided financial support to the army during the war.

However, in the conflict in the southeast, even the participation of radical militants is surprising, but the fact that the head of the Ministry of Internal Affairs of Ukraine Arsen Avakov for some reason stubbornly refutes information about the participation of the Right Sector, as well as other political associations in the military operation against the rebel supporters of federalization.

As stated in the official report of Avakov, no political parties, associations or civil movements were allowed to conduct the operation. It involves only the military, the Interior Ministry and the Security Service of Ukraine.

In turn, Russia also responded to the vigorous actions of the Kiev authorities near its borders. On the eve of the afternoon, Defense Minister Sergei Shoigu said that as a result of the aggravation of the situation in Eastern Ukraine, an order was issued to conduct military exercises of the Southern and Western military districts.
Ctrl Enter
Noticed oshЫbku Highlight text and press. Ctrl + Enter
We are
Reports from the militia of New Russia for 27-28 September 2014 of the year
Military Reviewin Yandex News
Military Reviewin Google News
63 comments
Information
Dear reader, to leave comments on the publication, you must sign in.