Aleksey Berest, banner over the Reichstag 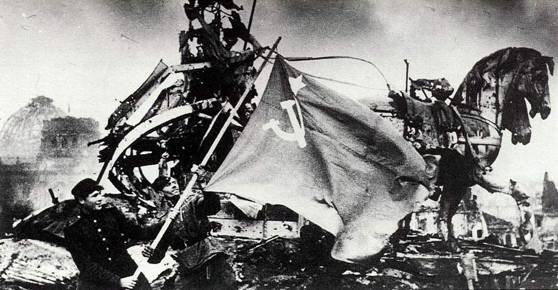 Taking Berlin and hoisting the red flag over the Reichstag was the final solemn chord in the victory over Nazi Germany.

Fighting in Berlin were literally for every house. The Germans put up fierce resistance. The capture of any stronghold by our troops brought the end of the war closer. But the special object was, of course, the Reichstag.

Every fighter who participated in the storming of Berlin dreamed of hoisting the banner over the cradle of fascism, the Reichstag. But I was lucky to do this to the political officer, Lieutenant Alexei Berest, sergeant Mikhail Yegorov, and junior sergeant Meliton Kantaria. Why did several post-war generations know only two heroes of that memorable event - Egorov and Kantaria?

How was it really?

In the central part of Berlin, the Third Shock Army fought. Red banners with a five-pointed star and a sickle and hammer were made for each of its nine divisions. All banners had a number on the canvas near the flagpole. The flag with the number "5" received the 150-I Rifle Division. He was handed over to the political officer of the first battalion Berest Aleksey Prokopyevich.

Fights in the Reichstag were fought for every meter. And in the evening on April 30, its commander Zinchenko F.M. arrived at the division and immediately ordered to bring the banner and immediately install it on the dome of the building. Several fighters, following the order, ran into the back of the building, and then quickly returned. The reason for the return was explained by the complete darkness in the room. The soldiers asked to give them flashlights, since nothing is visible. Colonel Zinchenko, blushing, shouted: "Historical moment! Homeland, the whole world is waiting ... And you - flashlights? !! ​​" And he ordered the commander of the first battalion, Captain S. Neustroev, to immediately establish a banner. He, in turn, entrusted the fulfillment of this historical order to his political officer. Alexey Berest took with him about ten machine gunners. Sergeants Egorov and Kantaria were also with him. On the second floor, the fighters with the flag climbed the stairs, where they met resistance from a group of fascists. Having quickly eliminated them, they began to rise higher. The climb was not easy. As a result of shelling, almost nothing remained of the steps. The standard bearers, like real circus performers, stood on top of each other and climbed higher and higher. And the three of us climbed to the roof: Berest, Egorov and Kantaria. It was they who were destined to fulfill this historical mission. Looking around, they saw the equestrian statue of Kaiser Wilhelm and decided to tie the red banner to it. They tied it tightly with soldier's belts.
The next day, the Germans tried to dislodge our troops from the Reichstag building, but they did not succeed. And, as a result, the Germans were driven into the basement and forced to throw out the white flag. The Nazis asked to negotiate. But as a condition they demanded that they be led by the senior officer from the Soviet side, since there were a general and several colonels in the basement (there were Germans in all 1650).

It was the 2 of May. Col. Zinchenko FM already managed to leave. He needed to be at the command post. In the Reichstag among our fighters over the captain there was no one. Therefore, they decided to dress Lieutenant Berests a little and send him to the fascists for negotiations. He was given a new cap and leather jacket. Berest quickly filed a new turn-key and went to negotiate with his commander captain S. Neustroev. Only the commander here played the role of adjutant Beresta. Risking their lives, they, along with a very young fellow, Private Ivan Prigudov (translator), went to the lair of the armed fascists. After two hours of talks, Lieutenant Berest convinced the Germans of the need to immediately capitulate. As a result, dozens and maybe hundreds of lives of our soldiers were saved.

... Hoisting the red flag over the fascist Reichstag is a historical event. Photos of soldiers with posed against the backdrop of this flag were placed in many newspapers. And then it was a reason to ask for a reward. But it should be remembered that the banner was hoisted at night, and those heroes who did it were not up to photographs.
In the 1946 year, according to the decree of the Presidium of the Supreme Soviet of the USSR, officers and sergeants who raised the flag over the Reichstag were awarded the title Hero of the Soviet Union. The lists include Captain Davydov, Sergeants Egorov and Kantaria, Captain Neustroyev, and Senior Lieutenant Samsonov. But Lieutenant Beresta was not on the lists ...

Captain Neustroyev, many years later, drove home to Berest and tried to give his Golden Star to a real hero, and he also wondered why this happened.

Alexey Berest's life after the war was not sweet either. He had to sit in jail for not keeping his nerves when the investigator questioned his fighting during the war. After such an insult, Berest threw the investigator along with the chair from the 2 floor.

And Berest died like a real hero, saving a child who fell under a train. He managed to save him, but he himself ... It happened in 1970.

And only in the 2005 year, sixty years after the war, A. P. Beresta was awarded the title Hero of Ukraine, posthumously.