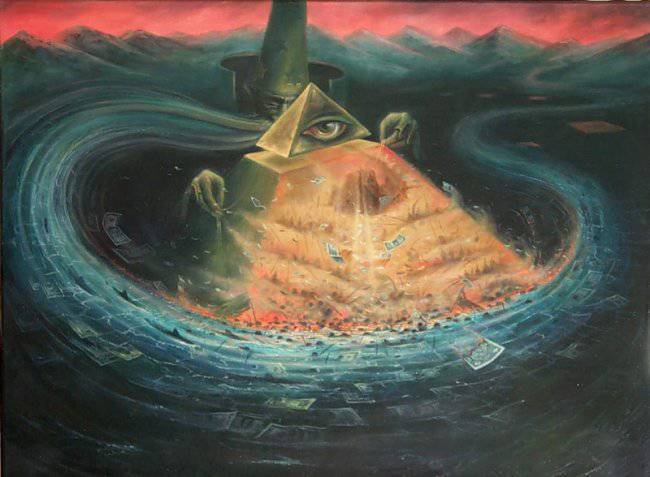 In the tangled wilds that they created and weaved for the people "social parasites", it is impossible to understand. One contradicts the other, but corresponds to a certain third, but the third contradicts the fourth, and so on. Everything is directed towards the stratification of consciousness and the separation of people. When it is impossible to understand the laws and postulates, when the signs of “success” correspond to the degree of degeneration, when it’s good that you are an unprincipled liar, but it is bad when you are decent, then you get the necessary environment for the reproduction of degenerates and the extinction of normal people.

In this chaos of degradation, simple indicators can be distinguished that indicate that a person is degenerate and degenerate, which means one thing: he should not even leave offspring (produce deformity), and even more so become an example for others. Such degenerates must be condemned and persecuted; there must be a reservation for them in which they would continue to parasitize and deceive each other until they finally disappeared.

What are these indicators? And everything is very simple - these are qualities that characterize a decent person. A normal person with normal development and upbringing feels very uncomfortable; when he has to lie, he suffers and tries to surround himself with such people and circumstances under which there would be no temptation to distort reality. With this approach, a decent person becomes necessarily an outcast. In the fact that there is now, it is impossible to preserve honesty, because everywhere there are traps that are pre-configured for human degeneration. Every time we distort reality, we move away from the laws of harmony of the infinite universe and surrender to the handful of degenerates who have created for us a kind of system that is safe for them and stupid and lowers for the population.

Only in this format can they impose false values ​​leading to degeneration, deformity and primitivism of consciousness. In such a system, they can preach any nonsense, if only it will contribute in the eyes of the layman to the creation of wealth and the obtaining of security for "business", "success", etc.

Thus, any crazy theories, ideologies, etc. are being introduced into society. - the main thing is that they should be flavored with a sense of superiority and material well-being. And we see that, based on such delusional exercises, a model of cancer is successfully introduced into society. This is when someone will be rich, swell and unite with the same degenerates at the expense of the bulk of society, which will wither and die.

A spiritually developed person has access to the laws of harmony and the development of an infinite universe; he feels that his “mapping” in the higher world is no less and even more important than the physical body. He does not really want to lose his hand, eye, etc., in that world, i.e. become disabled. Therefore, it will not distort reality in favor of the “parasitic monster”, for it is the spiritual handicapped people and freaks who feed the monster. Each lie separates you from the world of truth and attaches to a certain entity that feeds on your emotions, thoughts, etc. Each time, deceiving, you fall into the power of this malignant formation in the "subtle world." And it will require from you just such emotions and thoughts that are necessary for it to nourish. I think that it is not necessary to explain that this is anger, egoism, lies and so on. All this feeds the parasite freak and makes it grow.

This monster is made an example for imitating people who, with lies, cynicism and meanness, were able to make a career and become “successful”. Now, the concepts of well-being and wealth as the highest form of human development and evidence that it is worth something are being introduced into people's consciousness.

Egregor delegates to the masses his degradation installations and punishes those who managed to preserve the qualities inherent in a decent person. They are prepared for permanent exile and poverty. For everywhere where you can get financial independence, lies and lies are hypocrisy that you have to accept, and if not, if you strive to build your business without it, you will certainly encounter the same problems. You will hide the income and not pay taxes, because the latter are set up so that you are bent along with your business.

The system of parasitism is created in such a way that you will be forced to tune into a wave of lies unnoticeable to yourself. You will earn money for your family and do what everyone else does: hide and hold back, for this has already become the norm and is even protected by “law” as a commercial secret. Everywhere lies and hypocrisy, corrupting society from the inside.

When then such a society suddenly begins to demand patriotism, that is, they call for some kind of decency, then a person is rightly in doubt: and this parasitic monster, who is now afraid to lose us, is he definitely better than what comes from the other side?

Developing a lie and egoism, the system, when necessary, suddenly calls for the defense of itself, motivating it with danger to the family of a person, because it levels other concepts, erases as superfluous. You should take care of yourself and your family, and you shouldn't give a damn about the rest. This is how the system brings up, but when it needs to save itself from destruction from the outside, it begins to act on the “parts of the brain” responsible for altruism, to urge to rally, think about each other, in general, to that which itself has destroyed. And the latest methods of duping and psi-weapons allow it to be done.

On the one hand, the system ensures that it is not destroyed from the inside, developing terry selfishness and introducing survival mechanisms into society based on a “market economy”. But when they want to destroy the system from the outside, then all these divided people — envy, competition, and simply the philosophy of tough individualism — urgently need to be united around something. This contradiction does not play into the hands of the system, but it is created from contradictions, it is created for stratifying the human psyche and making it easily manageable. The latter excludes the ability to sound analysis of the situation and logical thinking.

Therefore, cutting off all previous experience in developing hatred for a neighbor who is a competitor for a tent on the market, or who is an official who drives a Lexus, because he was able to work so well, and now you have to pay him rent "in black", etc. ., the system seeks to unite the people to repel external threats. At the right moment, people forget all the “charm of life”, the system takes its forked and “rastroennoye” consciousness and collects from it the necessary perception of reality.

We can observe this paradox all the time. For example, with slogans for freedom and independence, the people demand their enslavement in the EU. With slogans of change in the country for the better, the people demand the preservation of the existing system and the shuffling of politicians who initially underwent filters for lack of decency. The people unite to repel the external aggressor under patriotic slogans, again defending what is enslaving and destroying from within. And here it does not matter that the external aggressor bears the same system, although, perhaps, with a lesser degree of degradation. Here it is important to protect something that they called their own - although the oligarchs and corrupt politicians have their own way here, the people are mainly bent on paying rent, housing, tents, etc. All this for him, too, suddenly became "his."

In fact, at such moments, it is possible to revise all the parasitic laws, including hidden slavery for the rights to lease all that is possible. For the landlord - this is the slave owner. Such a person does nothing and does not produce; he only improves his qualifications by deceiving the population and keeping it in unconscious slavery. He, like the machine for issuing money, wants to privatize everything that is possible, as long as it is land and everything that can be put on it, but ideally he would not mind privatizing the air, so that everyone would get the vital money. .

All this is necessary to keep society under control, which should be occupied by earning bread in incredibly difficult conditions, without confidence in the future, without the ability to lift your head from under your feet, so as not to stumble in the endless race for survival and see what happens in fact. Who is this monster that invented such a degenerative system in which freaks and liars survive, and decent people disappear as a species?

If in a single country such a degenerative system is strengthened with the help of the same market economy, it begins to openly implement the laws of genocide at the legislative level. For example, multiculturalism, asexual marriages, propaganda of homosexuality, juvenile justice, permission to take out production in the underdeveloped countries, thereby depriving their people of work and livelihoods.

All of the above can not be hidden and occur gradually and unnoticed if the neighboring state can protect itself from this and with the help of the national elite to keep their countries from being destroyed, and their people from dying out. In this case, the catchy difference will be visible. It is impossible, even using controlled media, to fool people's heads so that they do not see prosperity in the neighboring state, which, of course, will be presented as dictatorial and anti-democratic.

A globalization policy was thought out when degradation processes should affect the whole world at the same time, when the whole world must obey the same laws and when all degeneration becomes a natural process that can be attributed to lack of resources, environmental damage, overpopulation. But all this is a pure lie. Independent scientists have long figured out that the Earth can easily contain 100 billion people, but this should be a policy not of a global civilization suicide, as it is now, but normal, based on universal wealth and justice. In this case, “crazy globalizers” will not hide scientific works on the use of environmentally friendly and inexhaustible energy sources, will not invent hidden methods of destruction - such as GMOs, pseudo-vaccinations, propaganda of perversions, etc. And, for example, they will use millions of hectares of virgin land to grow organic crops.

Structures of “crazy globalizers” of the EU type are actively coping with the task of degradation, but for now they need to hide and do everything not so intensively, because many more countries do not enter it, and even Ukraine can enter only partially, which is unacceptable, because then it will be possible to watch the development of one part and the "bending" of the other.

People are increasingly beginning to realize the whole essence of the current system and draw the right conclusions. First of all, you need to abandon her technique, which she implemented everywhere. Stop lying and hypocrite, develop egoism. And finally, you need to understand that we are all cells of a single organism called “civilization”, which will develop and heal only with the health of all its cells. And on the contrary, they will die and die if some swell at the expense of others and devour common resources, becoming like a cancer.