April 26 2014
137
John Tefft, a career diplomat who had previously noted fruitful work in Lithuania, Georgia, and Ukraine, with serious democratic results in the last two, can become an American ambassador to Russia. Tefft also worked in Moscow as the deputy head of the American diplomatic mission in 1996-1999. A few days ago B.H. Obama called the decision to appoint a new ambassador official, although not final. It is believed that the appointment of Tefft will be a clear demonstration by the White House of the change of "reset" to "containment policy". 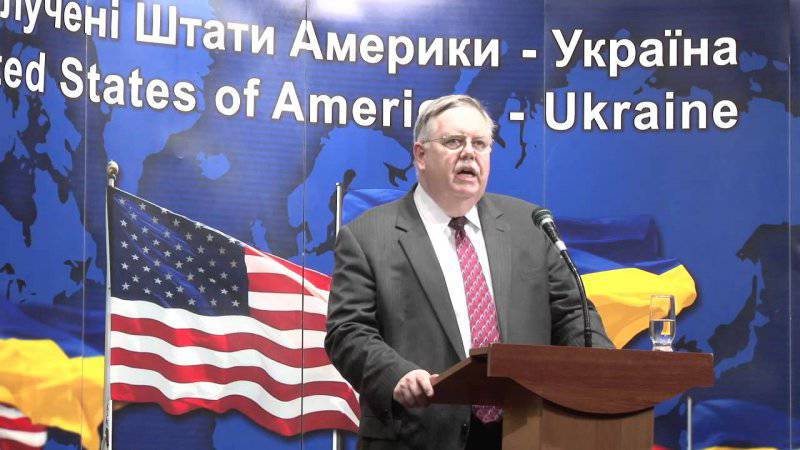 Recall, April 19 "New York Times" The view was expressed that the United States was renegotiating relations with the Kremlin and preparing to return to the so-called "deterrence policy." The latter implies cooperation with the Russian Federation only in certain areas of coinciding interests. In all other areas in the system of international relations, Russia will be “ignored” by the United States.

Mr. Tefft’s diplomatic career in recent years, in brief, looks like this: in 1996-1999. He worked as Deputy Chief of the American Embassy in Moscow; in 2000-2003 was ambassador to Lithuania; in 2005-2009 - Ambassador to Georgia; in 2009-2013 - Ambassador to Ukraine. What brought him liberal-democratic diplomacy of Georgia and Ukraine, no need to explain.

Tefft's career started in the seventies, in the midst of the Cold War, so the candidate for the “policy of containment” is the most suitable. Tefft began working at the US Department of Foreign Affairs at 1972. Here are some of his Domos' career milestones, which can be found in open network sources: the military-political adviser to the US after Rome (1986-1989), head of the Foreign Ministry's department USSR, and later in Russia and the CIS (1989-1992), Director of the Northern Europe Department (1992-1994). In addition, From 1992 to 1994. This man led the department of the United States Department of State for Northern Europe. With such an experience, he arrived in Moscow at the time of Yeltsin, and then set about implementing American democratic ideas in free Lithuania, Georgia and Ukraine.

No need to be a rocket scientist in order to make it clear: this uncle is not the same as the outspoken Misha McFaul. On the other hand, our oppositionists will think ten times before making an appointment. Maybe this appointment is another mistake of Obama.

Some interesting facts about Tefft resulted on the site "Echo of Moscow" blogger, creator of the project Ruxpert.ru Oleg Makarenko. Here is a brief reference in the form of a quote:

“John Tefft (born 1949) is an American diplomatic saboteur, a specialist in color revolutions, the new US ambassador to Russia. Convinced and consistent russophobe, an expert on setting "young democracies" against Russia. The last 25 years worked in the Russian direction and achieved considerable success in the fight against Russia.

The appointment of Tefft as ambassador to Russia means that the United States has embarked on a further deterioration in relations with our country. The New York Times states that Barack Obama intends to isolate Russia, “cutting off” its economic and political ties. ”

As US ambassador to Georgia, he worked closely with Saakashvili, setting him on Russia. The result of this work is the attack of Saakashvili in 2008 on South Ossetia.

In 2004, when Tefft was the deputy assistant secretary of state for the United States, in charge of relations with Ukraine, he received a medal from the US president. The expert believes that it was given to him "for helping to organize the Orange Revolution." Tefft returned to Ukraine in 2009, in the post of ambassador. His tasks were, presumably, the preparation of the next color revolution, which became a kind of final of his activities in the 2013 year.

“It was especially impossible to listen to their anthem. It's like some kind of torture! They seem to be pulled into chorus: “Ukraine has not yet become a vmerl ...” It seems that they are being buried alive. Some oppressive, heart-rending anguish attacks, that sometimes it seems that flies are dying from this howl. Listening to this howl is so unbearable that sometimes it seemed that it would be easier to die. ”

Tefft is seen in connections with Boris Berezovsky and Oleg Tyagnibok.

Tefft has a wife, Mariela. She is known for working with USAID.

Wikipedia Already with 21, April was announced on the corresponding page of John Tefft by the US ambassador to Russia (as said under his photo). In fact, there is no official appointment. And Wikipedia itself states in the text: “April 21 of 2014 of the year became aware of the intention of President Barack Obama to appoint Tefft as US ambassador to Russia.”

The appointment of Tefft, if it only happens, Obama will only underline the failure of his own "reset" policy. However, the American president always has a way out of a difficult political situation: one has only to say that the Russians are to blame for everything. The democratic public will swallow it.