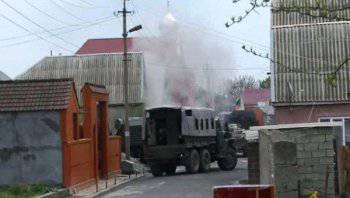 According to the information agency "Vesti", in the Dagestan city of Khasavyurt, a special operation took place, during which four militants who sat down in one of the houses of the village of Svoboda were liquidated.


According to preliminary information, two men and two women died who put up armed resistance to special forces soldiers of the federal forces.

As noted by RIA "News", representatives of the National Anti-Terrorism Committee of the Russian Federation reported that the militants killed were part of the so-called Aukh gang.

“As a result of negotiations, in which a relative of the bandits was involved, two young children were taken out of the house, but their parents refused to do so. During the blocking of the special forces, an accomplice of the gangsters seated in the house opened fire. She was neutralized by return fire, the message says. - After the failure of the bandits fold weapon and the attempt by them to break through the special operation entered an active phase. "

During the battle, all the militants in the house and their accomplices were injured and incompatible with life. Law enforcement officers and civilians were not injured.

According to RIA "News", among the victims was the suicide bomber Ruzanna Ibrahimova, who was on the federal wanted list.

Ctrl Enter
Noticed oshЫbku Highlight text and press. Ctrl + Enter
We are
Weekly summary (30 January-5 February) on the military and social situation in the DPR from the military officer "Mag"Review of special operation in Khasavyurt 5 May 2014
Military Reviewin Yandex News
Military Reviewin Google News
32 comments
Information
Dear reader, to leave comments on the publication, you must sign in.