5 May 2011
19
The main battle tank of Sweden under the symbol STRV-103, also known under the designation "S" is of particular interest, because for the first time in the world stories quite interesting design solutions were applied to tank building, in particular, the installation of two different types of engines - diesel and gas turbine, the absence of a tower, motionless relative to the entire hull tank a gun with aiming at the target by turning the hull in horizontal and vertical planes, double booking - the main for vital nodes and crew and auxiliary for secondary mechanisms. The crew of the Swedish tank consisted of 3 people. The tank was mass-produced from 1966 to 1971, in the 1990s it was withdrawn from service and replaced with German Leopard-2 tanks.

In the early postwar years in Sweden were not engaged in the development of new tanks. In 1953, the 80 tanks of the Centurion Mk3 with the 83,4-mm gun were bought in England, and a little later another 270 of the Centurion tanks of the 10 Mk with 105-mm gun. However, these machines did not fully satisfy the Swedish army, so from the middle of the 50s, they began to consider the possibility of designing their own tank. At the same time, the military leadership of the country was guided by the following military concept: a tank is an absolutely necessary element in the country's defense system both now and in the foreseeable future. It is especially necessary for the protection of the southern lowland regions of Sweden and the coast of the Baltic Sea.

Careful consideration of the geographical conditions of Sweden, along with the recruitment system of its army, led the designers to conclude that it was expedient to search for an absolutely new concept of a tank that would fit perfectly into the specific conditions of this Scandinavian country. According to experts, the new tank should have surpassed the Centurion in service and at the same time be easier in terms of crew training. 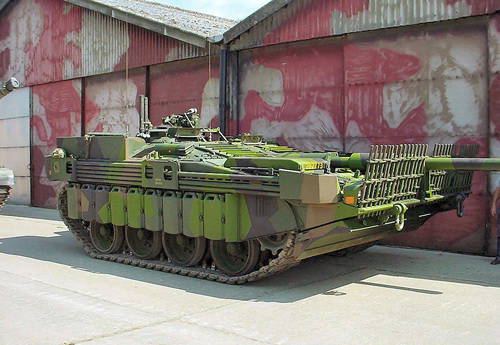 To meet the tactical and operational mobility requirements, the maximum weight of the tank was limited to 43 tons, and if possible the tank should have been buoyant. These conflicting requirements were further complicated by the fact that the tank needed a decent armor protection, which would provide it with protection from the new TCP. The search for a solution that would satisfy the requirements of reducing the size of the tank and at the same time facilitated crew training led to the abandonment of the classic layout with a rotating turret and multi-level crew accommodation (driver-in-body, the rest in the tower). This location, especially considering the loader, who needed to be given a space almost human-like, significantly increased the height of the combat vehicle.

These considerations and formed the concept of a new tank. The tank gun and machine guns paired with it were rigidly fixed in the body. Guidance weapons horizontally carried out using the usual hydrostatic turning mechanism, on dry ground the tank was rotated 90 degrees in a second, vertically the aiming was carried out by pumping oil in the hydropneumatic suspension from the front road wheels to the rear rollers and vice versa.

Due to the use of unusual layout solutions, the designers were able to combine high firepower, good security and mobility in a tank with a fairly limited mass. The tank received a reckless layout scheme with a "casemate" installation of the main weapons in the hull. The gun, mounted in the front hull sheet, did not have the ability to pump horizontally and vertically. Guidance was carried out by changing the position of the car body in two planes. In front of the tank was located the engine compartment, then the control compartment, which was also at the same time fighting. In the habitable compartment to the right of the gun was the commander, on the left — the driver / mechanic (he also performed the function of the gunner), behind him the radio operator was located facing the stern.

For a long time, the developers were faced with the question of choosing a power plant, the cooling system of which would be located in a well-protected space behind the combat compartment and inside the main armored corps. An additional protection to the cooling system was provided by large fuel tanks, which were installed outside the main armored hull and had splinterproof and anti-bullet reservation. The space in the front of the additional armor corps was considered suitable for the installation of intake and exhaust manifolds, air cleaners, since their damage in combat conditions did not cause the immediate exit of the tank. This conclusion was confirmed during the tests, the tank could perform a combat mission for several hours before it began to require repairs. Development of the power plant of the tank began in the 1959 year, after studying all possible options, the commission came to the unanimous opinion about the need to use a combined power plant from diesel and gas-turbine engines. 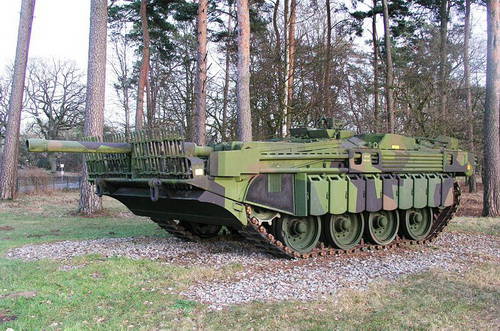 In such an installation, they were attracted by the “cost-effectiveness” criterion, which was best suited for this tank. Firstly, such an installation was, in fact, the only option that could be used in the space allocated for this. All others would require a significant increase in silhouette or weakening of the protection in the frontal part. Secondly, installation on the tank of diesel and gas turbine engines on both sides of the gun made it possible to make servicing of these engines accessible. Moreover, the combined power plant, each of the engines of which was able to provide the tank with mobility (albeit with a number of restrictions), was more reliable in combat conditions.

The main armament of the tank was the 105-mm gun with a barrel length 62 caliber, which received a fairly simple automatic loader and the rate of fire in 15 shots per minute. The loading shop was connected to 3 ammunition stores, which were located in the stern of the tank behind the combat compartment. Store # 1 had 4 vertical shafts for 5 horizontal shots - total 20 shells, store # 2 had 5 vertical shafts and the same horizontal shots - all 25 shells. Shop number 3 had a 1 series on 5 shells. Thus, the tank ammunition consisted of 50 shells. Shutter guns and recoil devices located above the shops between the two blocks of the cooling system. This approach to the layout made it possible to provide a convenient opportunity for filling stores with ammunition with the best ballistic protection, while the height of the tank did not exceed 1,9 m.

When reloading guns cartridge case was ejected through the hatch, located in the rear of the machine. Together with the ejector located in the middle part of the barrel, this significantly reduced the pollution of the tank's habitable module. The reset of the empty automatic loader was done manually through two hatches located to the rear of the hull and took 5-10 minutes. On the left side of the frontal sheet in a stationary armored casing two 7,62-mm machine guns were mounted, having ammunition in 2750 cartridges. They were also guided by turning the hull, i.e. machine guns played the role of paired with a gun. The shooting from the gun and machine guns was carried out by a driver and tank commander. Above the hatch of the tank commander, another turret was mounted on the turret, which could serve as an anti-aircraft gun. This turret could be equipped with an armored seat. 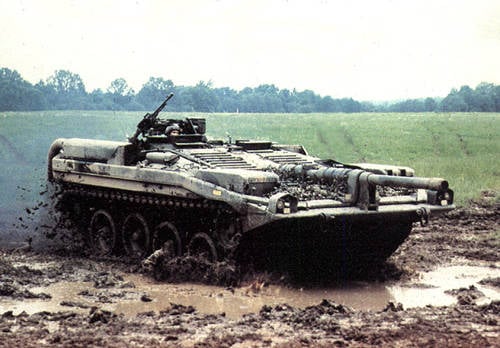 The driver and commander of the tank had at their disposal binocular combined optical instruments with variable multiplicity of approximation. A laser rangefinder was built into the gunner's sight. The commander’s observation devices were stabilized in a vertical plane, and the commander’s turret in a horizontal plane. In addition, interchangeable periscopic blocks were used, the 4 of the block was installed in the commander's turret, one by the driver, the radio operator was 2 of the block. All optical devices were covered with armor flaps. The security of the tank was ensured not only by the thickness of the armor of its hull, but also by sufficiently large tilt angles of the armor plates, above all, the upper front hull plate. Additional protection was served by a small area of ​​side and frontal projections, as well as a trough-shaped tank bottom.

The constant increase in the effectiveness of the means of defeating tanks on the battlefield, forced Swedish engineers to undertake upgrades to the tank STRV-103, which for almost 30 years was the Swedish MBT. First of all, it was necessary to increase the protection of the tank from cumulative ammunition. The design features of the upper front plate of the tank hull did not allow for the full use of mounted dynamic protection units, but the Swedish designers found a very original way out of this situation. In front of the hull, they installed a grille of bronestal that was able to withstand anti-tank grenade hits up to 4. To protect the aircraft, however, the Swedish engineers decided to use 18 mounted canisters (9 units per each board), this solution, in addition to a noticeable increase in fuel reserves (in 400 liters), would also serve as protection against cumulative ammunition.

However, this Swedish tank was still not decided in many countries. For example, the United Kingdom, Australia and the United States gave him very high marks, but as an anti-tank self-propelled gun. The Swedes, to the last, considered their offspring a full tank. The only thing he was never denied is the unusualness of his construction.

Prowriterslab.com is the best site for beginners and developing writers. Do you want to start writing? There are rules and tips for everything, respecting book writing rules it is quite easy to learn how to plan the book correctly, which will facilitate further work on it.
Ctrl Enter
Noticed oshЫbku Highlight text and press. Ctrl + Enter
Military Reviewin Yandex News
Military Reviewin Yandex Zen
19 comments
Ad