April 25 2014
33
All of us, who grew up on military films and books, can easily imagine soldiers on motorcycles. Usually, an image of German motorcyclists from the composition of the mechanized units of the Wehrmacht is born in the head, images of the Red Army men rarely emerge, and almost always they are motorcycles with a sidecar. But all these are distant images of World War II. Today, motorcycles in the armies of the world have become very rare, but they have not lost their relevance for solving highly specialized tasks. In particular, in the United States, the Defense Research Agency DARPA commissioned by the US military began the development of a hybrid stealth motorcycle.


Teams of special forces who are able to use hybrid motorcycles in special operations are interested in such a technique. They need motorcycles to carry out lightning raids and penetrate remote areas. Therefore, DARPA is working on the creation of a silent hybrid motorcycle that could work from both electricity and conventional fuel and was invisible to thermal imagers. In fact, we are talking about a fast vehicle for making silent raids.

The meaning of using hybrid systems that can work on both gasoline and electricity is that they allow special forces saboteurs to penetrate deep into the rear of the enemy off-road with the help of a silent electric motor, at the same time, making it possible to ensure high speed of movement and long range account of the use of an auxiliary gas tank. And although this project is still at the research stage, the company direct developer Logos Technologies expects to combine its own multi-fuel silent hybrid power system with an electric cycle of the BRD Motorcycles company, which specializes in the production of sports motorcycles of various classes. 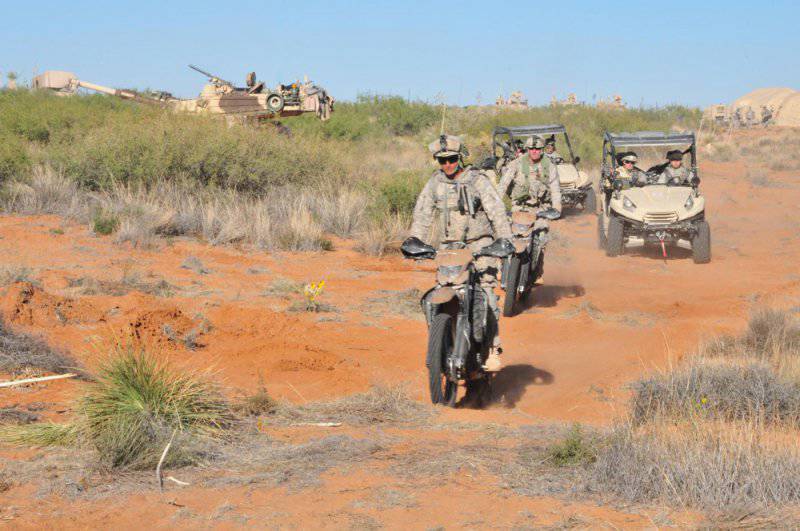 “A lightweight, quiet and reasonably robust machine with all-wheel drive can be a great help in special operations conducted by the American army, especially in extreme circumstances and on rough terrain,” said Wade Pulliam, an advanced development specialist at Logos Technologies. According to Pulliam, today the military is increasingly using small-sized fighting groups that have not had access to the basic military infrastructure for quite a long time. “Under these conditions, they have to rely on efficient and unpretentious technologies, like a hybrid electric motorcycle. Our motorcycle can be attributed to advanced technology, while it is easy to manage and relatively cheap, almost silent in operation and can use several types of fuel, ”he praises his company's project. The technology of "inconspicuousness" of a hybrid military motorcycle is implemented through the use of a hybrid electric motor that can operate on both electricity and carbon fuel.

In addition, such a motorcycle will not only be able to increase the autonomy of its movement compared to ordinary motorcycles that are equipped only with internal combustion engines (ICE), but also to play the role of a backup power source for military personnel. If somewhere on the road a soldier will need to connect to the power network, its role can easily be taken on by a rechargeable battery mounted on a stealth motorcycle. Also installing an electric motor on a motorcycle will allow you to achieve fuel savings of at least 10%.

Moreover, according to the plans of engineers from DARPA, electricity for the new motorcycle will act as an additional advantage. It will mainly be used as a backup source for movement only during special operations or during secretive maneuvers. The rest of the time, the motorcycle will ride on a conventional ICE, burning standard JP-8 American fuel (aviation kerosene). This fuel is a universal fuel for military equipment of the NATO block. It is used in the air force, as well as in the ground forces for refueling tanks, ground equipment, mobile and portable diesel generators (as a replacement for diesel fuel). If we talk about such a parameter as the volume of the motorcycle engine, then, according to preliminary information, a hybrid motorcycle will be able to provide a four-fold reduction in noise level compared to ordinary motorcycles (about 90 dB). 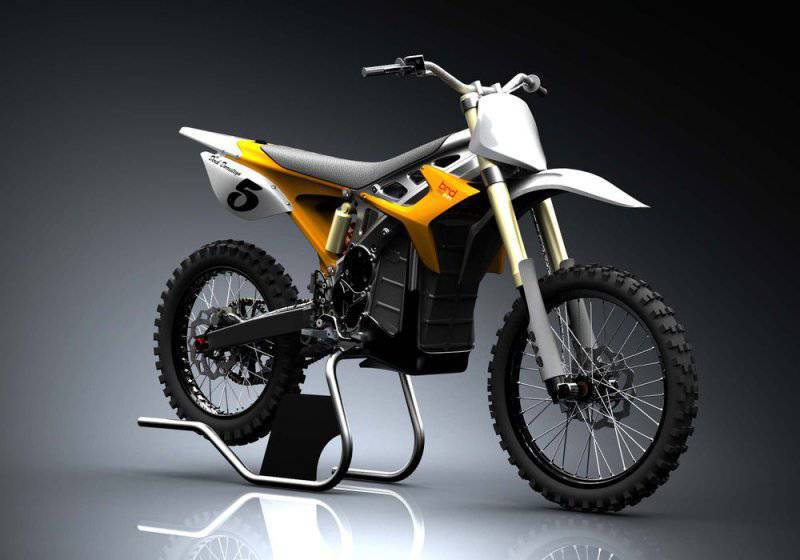 BRD RedShift MX
To develop a basic platform for a hybrid motorcycle, it is planned to use an existing model of a racing motorcycle from BRD RedShift MX. This all-electric motorcycle weighing 100 kg today can be purchased for 15 thousand dollars. At the moment, the RedShift MX motorcycle provides a two-hour power reserve, which can be increased by installing a gas tank on it, the capacity of which will be determined by the US military in the course of the research. The focus on the electric element of the new system is due to the fact that the DARPA agency thinks much more about the quietness and secrecy of a military motorcycle than about its effectiveness. And although the existing unmodified version of the RedShift MX motorcycle is able to reach speeds of up to 130 km / h, this possibility is unlikely to be useful when traveling over rough terrain and off-road, which is due to the conduct of special operations.

At the same time, it is impossible to say that the idea of ​​using special teams on silent motorcycles arose from the US military only in 2014 year. Last year, the company Zero Motorcycles received a military contract to create a similar electric cycle, designed for special forces. The following requirements were made to the motorcycle: the possibility of ignition without a key and complete shutdown of the electrical system, the presence of replaceable battery packs, which would be enough for 2 hours of operation.

Although the designers from Logos say that their off-road motorcycle is the first all-wheel-drive car of its kind with a multi-fuel electric motor, this is not quite the case. In June, 2013, the company Zero Motorcycles has already reported about a similar project - an electric cycle called MMX. According to the information of the Defense Media Network portal, this motorcycle was developed specifically for the needs of the military and gave an idea of ​​exactly how such a vehicle should look. Engineers Zero Motorcycles say that the thermal signature of such a motorcycle is almost imperceptible to modern thermal imagers, and its engine runs almost silently. To control the motorcycle MMX, a special instrument panel with toggle switches was installed, which replaces the traditional ignition key and allows you to start the motorcycle very quickly and control its systems. 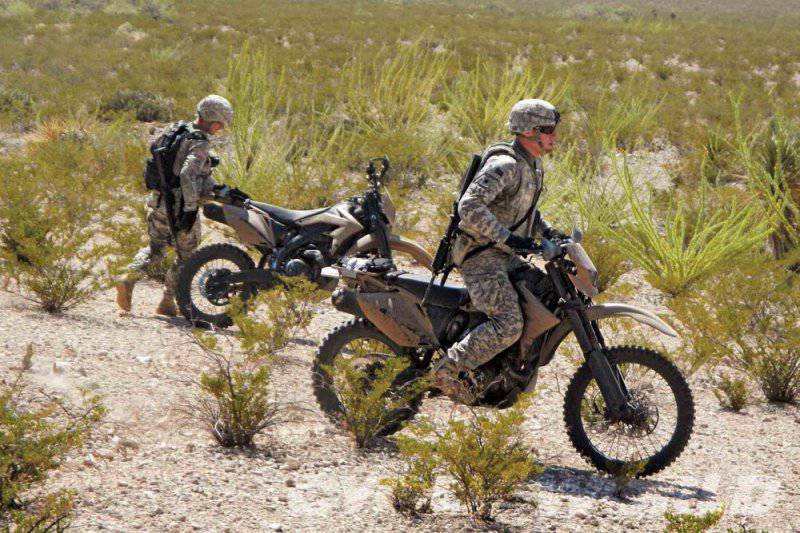 It was reported that all the options of the MMX motorcycle could be configured via Bluetooth using a special application that could be installed on a tablet or phone. There were special connectors on the front and rear of the motorcycle, designed to connect additional military equipment and infrared night vision systems. Modular rechargeable batteries could easily be replaced in the field, while the electrocycle could work effectively with its long immersion in water to a depth of 1 meters.

However, unlike Zero Motorcycles, Logos Technologies specializes mainly in breakthrough scientific technologies. This company has worked on the creation of lasers, biofuels, ultra-modern tracking sensors, cyber defense systems. Among its customers were the Pentagon and the American police. So you can count on Logos to surprise us with something.

Konstantin Sivkov, Doctor of Military Sciences, Vice-President of the Academy of Geopolitical Problems, believes that there are no combat motorcycles in the Russian army, since the effectiveness of such equipment is low. "It reminds history with the American Stryker armored personnel carriers: Afghanistan clearly showed that this light vehicle has low efficiency, its armor easily penetrates, but what to do if 4 has already produced thousands of vehicles? You will not install serious models of weapons on a motorcycle unless you attach a sidecar to the motorcycle, which makes it meaningless. If you take non-urban conditions of use, then biker units can be relatively easily identified and then destroyed, ”Sivkov said in an interview with Russkaya Planet. 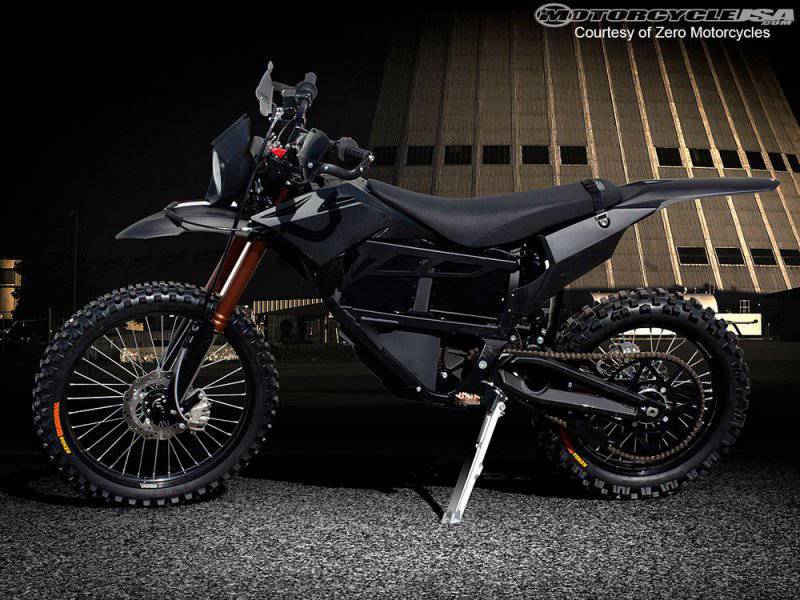 Zero Motorcycles MMH
According to the expert, lightweight quiet motorcycles are only suitable for solving a narrow range of tasks. Such motorcycles are suitable for the application of selective attacks on individual objects, conducting reconnaissance. It is best to act with their help in areas with a developed road network. In this case, Konstantin Sivkov believes that the use of an electric motor is very doubtful, in order to go somewhere would need a battery weighing about 20 kg.

Ctrl Enter
Noticed oshЫbku Highlight text and press. Ctrl + Enter
We are
Iron Horse: how motorcycles were used in hostilitiesInnovation Day of the Southern Military District: Pictures from the Exhibition
Military Reviewin Yandex News
Military Reviewin Google News
33 comments
Information
Dear reader, to leave comments on the publication, you must sign in.