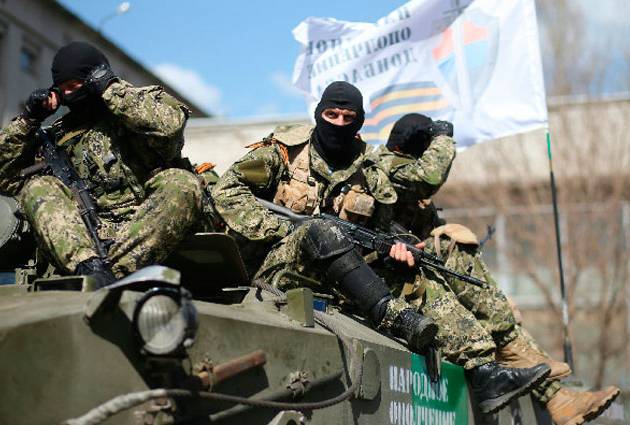 Sergey (Martynenko) "Marine", 32 of the year. He was born in Khmelnitsky, then he moved to Slavyansk. "By marriage." We met last year when he was working in Russia, working in the same office in the field of landscape design. Slightly corresponded then in social networks, until I caught fire at all. It reads "IN" for two years.

Already today, around three in the night 24.04. it originated and in contact on Skype invited to five minutes. The conversation was very chaotic, because I had a lot of questions, but he had little time. "I ran home, clean wash before the fight" - his words.

I immediately noticed that his speech had changed. In general, Ukrainian words have disappeared, with which he was easily scattered last year. We tried to call him a crest, but given his army past in the marines in Feodosia, it did not stick. And he always said: "I am not a crest, I am Ukrainian." So "Marine" and called.

When I told him about this, he slightly chuckled and said that "All of us are here now for our own Russians, and for those we are Muscovites."

Events of the day 24 April already for anybody not a secret, so some filtering out our conversation, I allow myself to put some points that could "grab" of our conversation. On behalf of the author.

Today, we definitely put under the press. This is already clear to all. The more the pull can not be accurate, so trample, probably in the morning.

Not enough, of course, weapons. But we have commanders that need. There will be for freaks and surprises. We are not in vain for a week's hands.

Many young guys who are crazy about to fight. I feel, will put many. This is still a war, not a game. But to stop people unrealistic, all understand that nowhere to retreat.

Many say that you need to go to Russia. It makes sense, no matter how cool. But basically ours consider that our land, our Homeland is here, we must fight here.

Kiev ***** believe that it will be possible to make five shots, and everyone here will scatter, whoever. Nifiga! You can kill five people, you can kill ten. Anyone who wants to live in peace and in a normal country, it is already impossible to kill. Then you need to clean the entire southeast at the root. All

I can not believe until now that they decide on the blood. But apparently, no other way will not work. We will fight.

Of course, most of all want to believe that you have not quit. It is clear that this is not very easy, but you always want your back to be covered. Not in the plan, so that there was much to blame for, if we were rolled out, but so that later there would be someone who could avenge us on these bastards.

Ending. The Kiev junta announced the suspension of the antiterrorist operation "In connection with the threat posed by Russia." The attackers retreated to their original positions. Their losses are still unknown, but this is not the point. More important every dead defender Slavyansk than a dozen of these.

Seryoga, I wish you all victory. Hold on. We - together.

Ctrl Enter
Noticed oshЫbku Highlight text and press. Ctrl + Enter
We are
Control systems of the battle of the American army. Current position and future-oriented modernization strategyOne-armed Marine serves as an example for other fighters.
Military Reviewin Yandex News
Military Reviewin Google News
142 comments
Information
Dear reader, to leave comments on the publication, you must sign in.