22 2013 June
17
These days the most famous multi-barreled weapons systems are machine guns designed according to the Gatling scheme. Popular among directors and developers of computer games, exotic six-barreled machine guns with an external drive managed to overshadow almost all developments of this type, firmly occupying their niche both in popular culture and among real-life weapons. 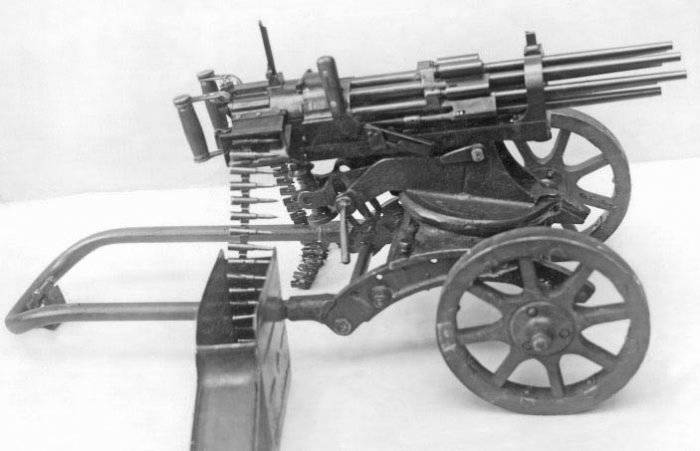 Nevertheless, we should not forget that there were other, no less interesting designs that could well be a serious competitor to the "turntables" of Dr. Gatling. What is especially interesting, among the developers of such systems were our compatriots. 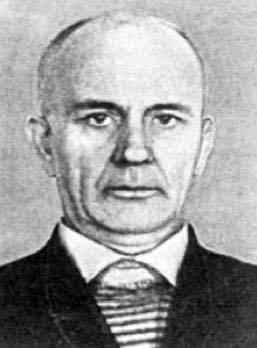 Ivan Ilyich Slostin, not so widely known as many others, the gunsmith’s designer, devoted about twelve years of his life to creating and working out multi-barreled high-temperature machine guns, the design of which was founded, unlike Gatling’s systems, not on an external drive, but on the principle removal of powder gases. The first sample of such an eight-barreled machine gun with the removal of gases through a muzzle on each separate barrel was tested in 1939 year. It was developed as a weapon for aircraft, as an air defense system and to fight the enemy’s infantry.

During the tests, the rate of fire at 3300 rounds per minute was recorded, but when the standard tape in 250 rounds was warmed up after firing cartridges due to expansion of barrels and an increase in harmful resistance during their rotation, the machine gun refused to work. The accuracy of the shooting also left much to be desired, but for this type of weapon - a heavy fire weapon - it was, in principle, sufficient. The outbreak of war did not allow the completion of the entire test cycle, but in 1946 the 7,62 mm of the eight-barreled Slostin machine gun was again tested, but a machine gun of an entirely new, revised design was presented on them, different from the machine gun of the 1939 model of the year.

The Slostina machine gun is a weapon with a rotating block of barrels chambered for 7,62 x 54 mm. This is an automatic weapon with eight consistently firing barrels, the operation of which is based on the extraction of powder gases through a special transverse channel in the barrel. The machine gun is a weapon of heavy fire and can be used to combat the enemy's manpower, to fight against unarmored and lightly armored targets, and also as an anti-aircraft weapon. 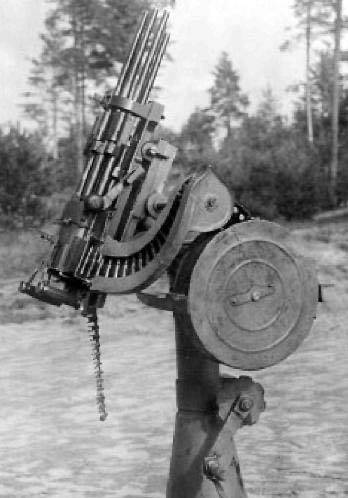 The machine gun is a weapon with eight barrels, which are interconnected by the front and rear clutches in such a way that the assembly of the barrels is a drum in which each individual barrel can move in the longitudinal direction. On each barrel there is a gas chamber and a gas piston and with their help the impulse of powder gases is transmitted to complete the automation cycle. The gas piston of each barrel is placed in the gas chamber of the barrel, which is located next to it, so that a closed circuit is obtained between all the trunks. Assembly trunks placed on the axis, the ends of which are located in the bearings of the butt pad and the front rack. With the help of these bearings, the trunks together with the couplings make rotation. On the basis of the machine gun and on the lid there is a copy groove through which the rollers located on the spikes of the barrels move. On the rear bearing of the machine gun rotates a special gear connected with the trunks. It has an external and end tooth. With the help of an external tooth, the cartridge belt moves, and the end tooth produces cocking and lowering of the impactor during automatic shooting. In the back of the weapon weapons are placed drummer, mainspring and warhead. In a constructive respect, the system does not have a shutter as such - the barrel bore is locked by pressing the barrel roller against the wall of the base groove. 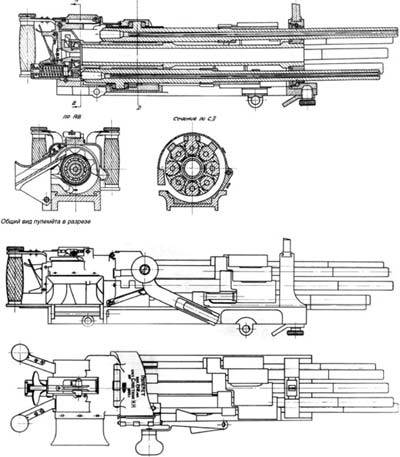 In the machine gun prepared for shooting, the cartridge was completely placed in the chamber and the channel was locked in the lower barrel of the machine gun. At this time, the cartridge's cap is against the striker, and the drummer is cocked and held in a sear. In the course of the automatic operation, shooting is conducted from the barrel, which becomes after turning the barrel barrel to the lower position. To start automatic firing, when the trigger is pressed, the firing pin is freed from the sear and, under the action of the mainspring, begins to move forward, striking the striker that breaks the cap. The gases that follow the bullet through the barrel pass through the holes in the gas piston of the firing barrel. At this time, the gas chamber of the trunk next to it, located to the right of the shooter, is put on the gas piston of the shooting barrel. Due to the movement of this neighboring trunk forward, the whole drum is rotated counterclockwise, as a result of which it appears to be leading in the work of the entire system. The roller of the leading barrel, when the barrel moves forward, moves along the copy groove of the base and thus makes the entire barrel barrel rotate around its longitudinal axis. 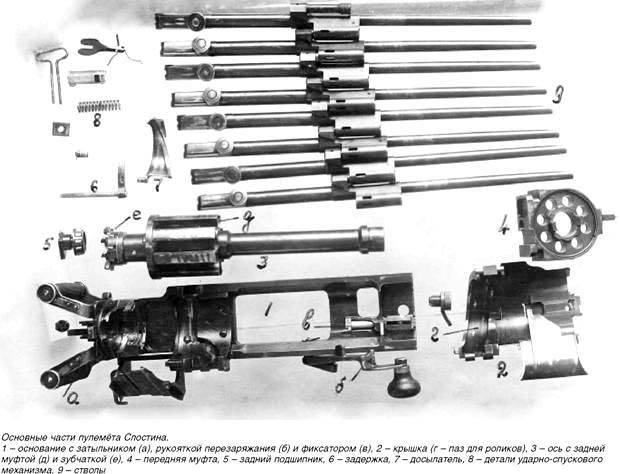 In this case, the firing barrel shifts and becomes the place of the leading barrel, and in its place comes a new barrel with a cartridge. With this movement of the firing barrel, the liner, with its fringe, enters the hooks on the back of the barrel, and the end tooth of the gear wheel cocks the hammer. As soon as the drum turns to one eighth of the turn, the drummer jumps off the end tooth and hits the striker again, which in turn breaks the cap in the cartridge of the approached barrel. At this time, the first shooting barrel stands in place of the leader and just as well, due to the pressure of gases on the bottom of its chamber, it begins to move forward and upward, leaving the sleeve in the hooks of the back plate. The stroke length of the barrel is 50 mm. Drum trunks makes a new turn on one-eighth and moving while firing the barrel, pushes the sleeve from the cavity of the machine gun. 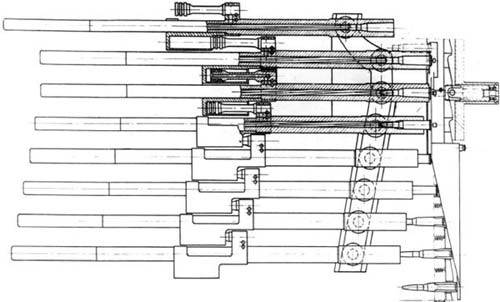 The ribbon in the weapon is moved by the outer tooth of the teeth, and the rammer with a screw surface located above it gradually rotates the cartridge from the tape forward 30 mm while the drum rotates, and the firing barrels, moving with rollers along the copy groove, come back and are put on the cartridge. When the trigger is released, the drummer becomes a combat platoon and the shooting stops.

On trials, the reported rate of shooting at 3300 shots per minute was only achieved twice. The real repeatedly recorded rate of fire was 1760-2100 shots per minute. In terms of accuracy, the Slostina machine gun was also six times shorter than the SG-43 SG-1943 machine gun. But it was noted that for a squall fire weapon such a dispersion of bullets could be allowed, since the density of fire from it is still quite large.

In May 1949, the last tests of the model of the eight-barreled machine gun of Slostin were conducted under the cartridge of 14,5x114 mm. In particular, it was planned to use it as an anti-aircraft gun on the then developed heavy tank IS-7. Automation differed from the previous design in that the barrel block was assembled into a rigid structure with the help of the rear clutch and the front cage without the possibility of longitudinal movement of the barrel, and the barrel block was rotated when the slider rolled back with the gas piston of the firing barrel, which interacts with the cam groove of the block and clamp. 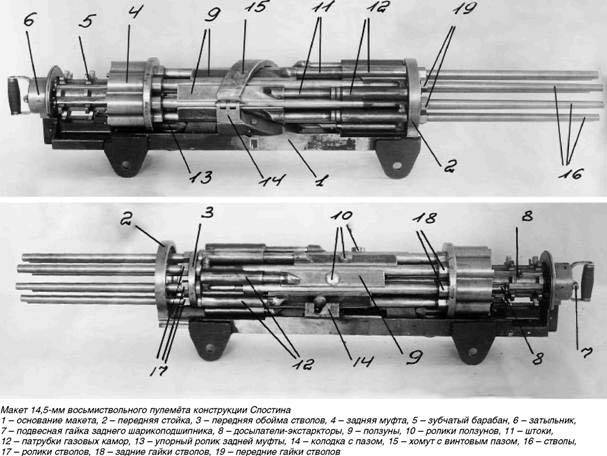 In the course of the shooting, two main drawbacks of the 14,5 mm sample were revealed: off-center capsula associated with the difficulties of braking a massive block of barrels and transverse ruptures of the sleeves due to the design of the locking assembly (lack of a bolt) when using an extremely powerful cartridge 14,5x114 mm. It was not possible to modify the machine gun without a cardinal change of the whole structure. история eight-barrel machine guns Slostina over.