April 26 2014
58
The theme of prostitution in Germany since the Second World War has always been taboo, only in the 90-ies did the German publications start to cover this stratum stories. It is hard to believe in this, because as soon as they came to power, the National Socialists began by supplementing the Criminal Code with a paragraph, according to which, with a depraved offer, they could be put in jail. Only in Hamburg for half a year about a thousand and a half women accused of prostitution were detained. They were caught on the streets, sent to camps and subjected to forced sterilization. Somewhat more fortunate for those women who sold their bodies, combining prostitution with government tasks. This is primarily about the notorious "Kitty Salon", sung in the eponymous film by Tinto Brass.

1. In the 19 century in Germany, the creation of brothels was welcomed to avoid numerous diseases. Men, accustomed to the accessibility of the female body, did not deny themselves habits and did not consider it immoral to remove a prostitute. The tradition was preserved under Nazism, so in connection with numerous cases of rape, homosexuality and diseases of soldiers, on September 9 of 1939, the Minister of the Interior Wilhelm Frick issued a decree on the creation of brothels in the occupied territories.
To account for front-line brothels and prostitutes, the military department created a special ministry. Merry frau were considered civil servants, had a decent salary, insurance, enjoyed benefits. The fruits of the propaganda work of the Goebbels department cannot be disregarded: the German man in the street, who had a son or brother in the war, was anxious about the Wehrmacht, and even among prostitutes, along with professional women, there were many who went to serve front-line soldiers from patriotic motives. 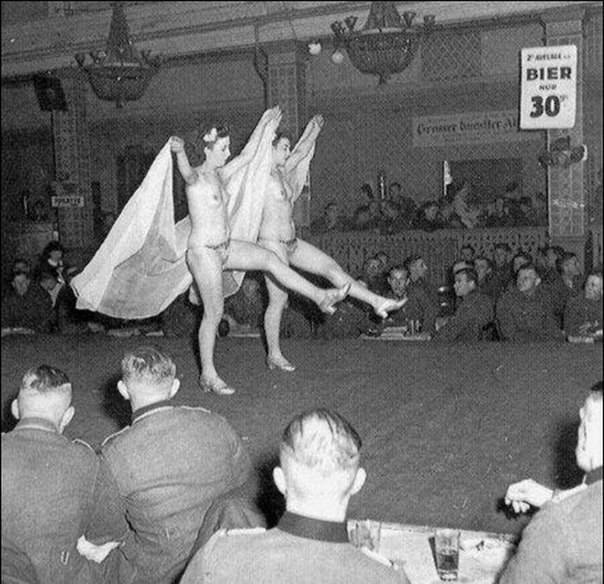 2. The highest quality service was supposed to be in Luftwaffe hospitals, Goering's favorite brainchild, where it was supposed that there were only one full-time frau on 20 pilots or 50 technicians from ground support personnel. immaculately clean underwear, like bed linen, had to be changed for each “iron falcon”. 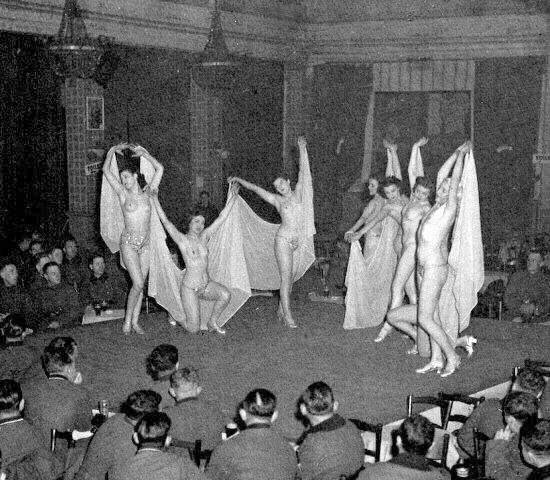 3. In the land forces, where the service was put on stream, it was not always time to dress, and the girl was waiting for a new guest in bed. By the way, the sheets and pillowcases in the soldiers' brothels were supposed to be changed after every tenth client. 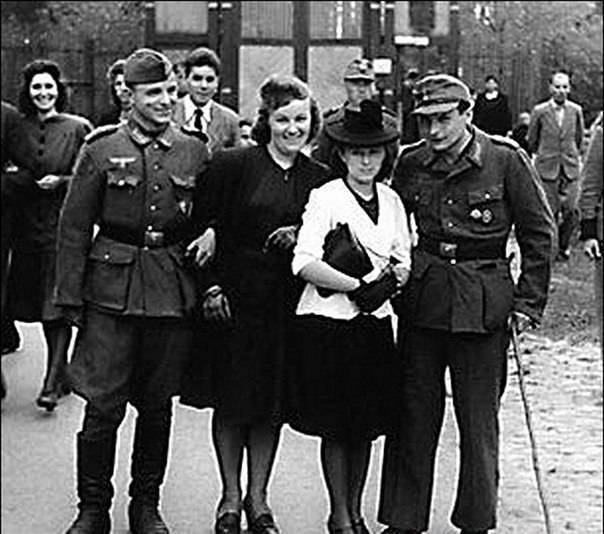 4. Curiously, for soldiers of satellite armies, access to German sex institutions was denied. The Reich fed them, armed them, outfitted them, but sharing their Ities with the Italians, Hungarians, Slovaks, Spaniards, Bulgarians, etc. was considered too much. Only the Hungarians were able to organize for themselves the likeness of field brothels, the rest were twisted as best they could. The German soldier had a legal rate of visits to a brothel - five or six times a month. In addition, the commander could from his own hand out a coupon distinguished as a reward or, on the contrary, be punished with deprivation for a fault. 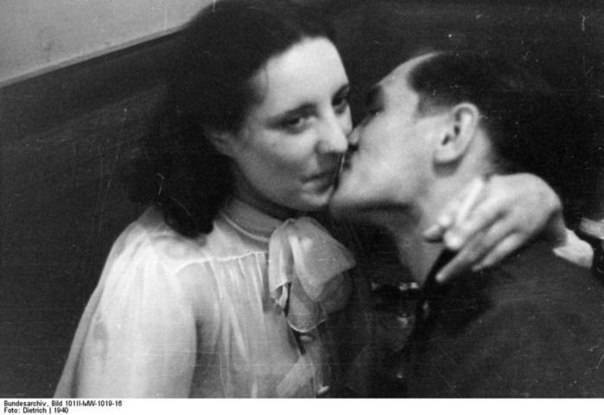 5. Soldiers and sergeants brothels moved directly behind the troops and were located in the village near the location of the unit. A pass pass was attached to the leave note: to the soldiers - blue, to the sergeants - pink. 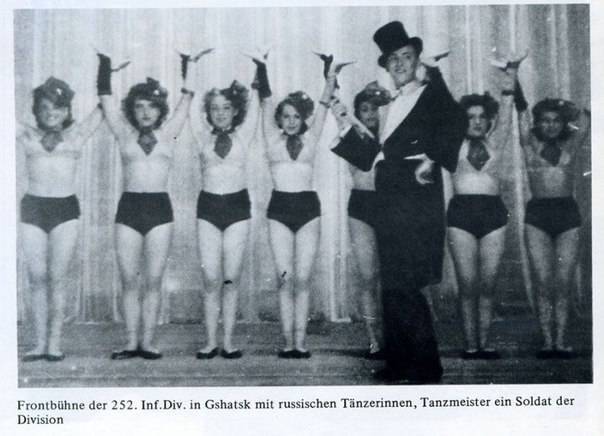 6. An hour was allotted for the visit, during which the client had to register the coupon where the girl’s first name, last name and registration number were entered (the soldier was required to keep the 2 coupon of the month for every fireman), to receive hygiene products (a piece of soap, a towel and three condoms) (according to the regulations, it should be washed twice), and only after that it was allowed to the body.
Barteries flourished in the subdivisions: the ladiesmen exchanged coupons from those who liked to eat more than sex, for marmalade, schnapps, cigarettes. Separate daredevils set off to tricks and using other coupons to sneak into sergeant brothels, where the girls were better, and someone even penetrated into the officers, risking to get ten days in case of being caught. 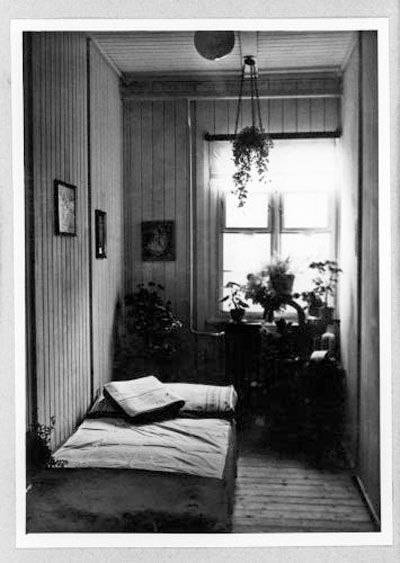 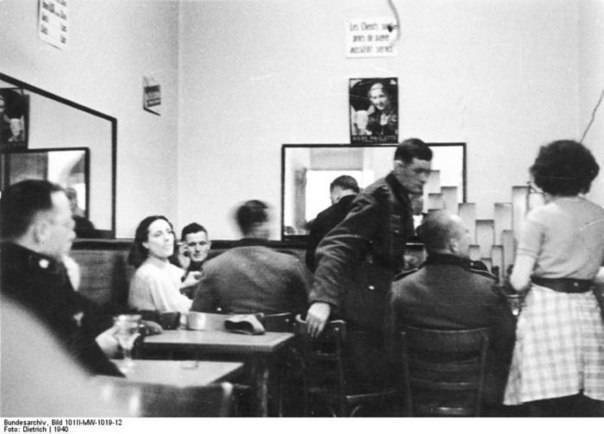 8. By capitulating 22 on June 1940, France submitted its numerous brothels to the German occupiers. And in the second half of July, two orders were issued to curb street prostitution and to create brothels for the Wehrmacht.
The Nazis confiscated the homes of tolerance that they liked, recruited management and personnel, adhering to the criteria of Aryan racial purity. Officers were not allowed to visit these establishments; special hotels were created for them. Thus, the command of the Wehrmacht wanted to stop the chastity and the spread of venereal diseases in the army; increase the soldier’s motivation and resilience; prevent intimate relations on the side, because of the fear of espionage and the birth of the inferior; and sex with sex to prevent sexual crime, shaking the ranks of the army. 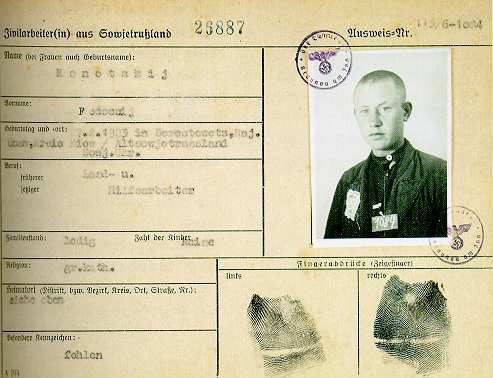 9. In these houses of tolerance only foreign women worked - for the most part Poles and French. At the end of 1944, the number of freelancers exceeded 7,5 millions. Among them were also our compatriots. For a penny, raising the economy of a belligerent Germany, living in closed settlements, they had the opportunity to shop for a coupon in a brothel, which was encouraged by the employer. 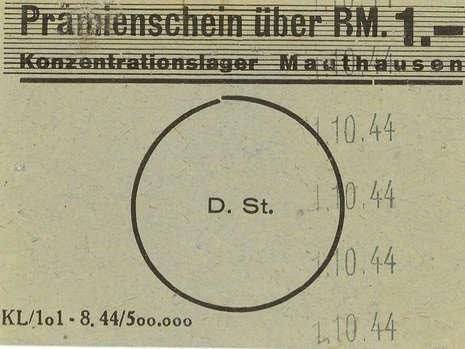 10. The voucher worth 1 Reichsmark. 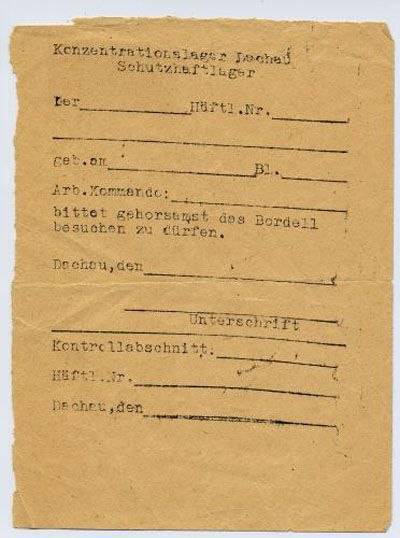 11. To visit the brothel, the prisoner had to make an application and buy the so-called Sprungkarte worth 2 of the Reichsmark. For comparison, a pack of 20 cigarettes in the dining room cost 3 Reichsmarks. Jews were not allowed to visit the brothel. The prisoners, who had weakened after the working day, did not willingly go to the houses of tolerance provided by Himmler. Some for moral reasons, others for a material bordelny coupon could be profitably exchanged for food. 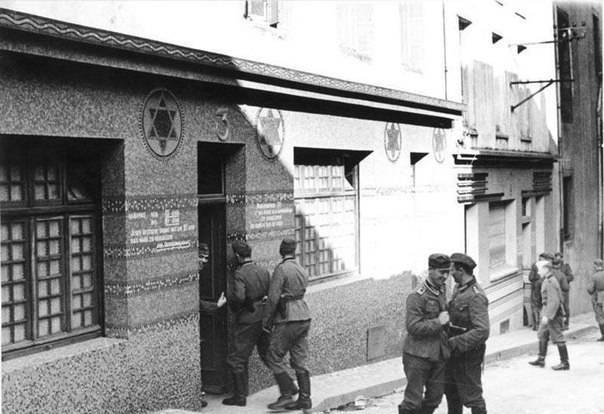 12. In the French city of Brest, a brothel is located right in the synagogue. 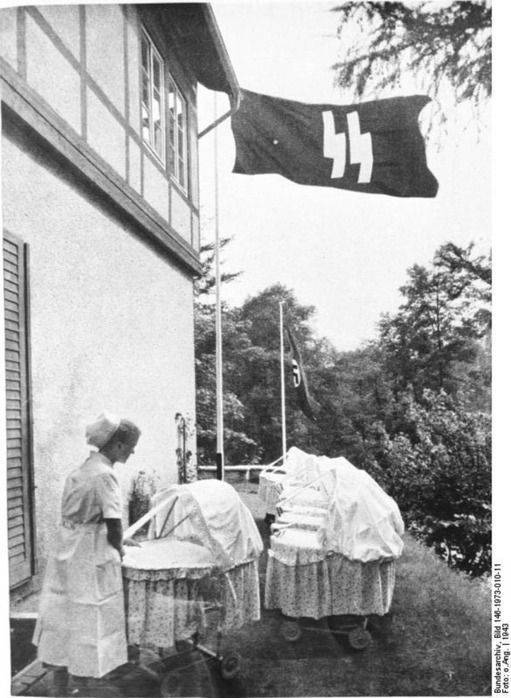 13. It is clear that the results of such employment appeared. Many women reluctantly went for an abortion and preferred to have a child anonymously in the so-called Nazi de-hostel - “Lebensborn”. The Nazis themselves welcomed the connections of the soldiers with the women of the fraternal Aryan peoples. Norway, Denmark, Belgium and the Netherlands were the breeders of "children of good blood." Only registered children were born to 100 thousands, and these children could be adopted, taken away from their mother and taken away to Germany. France was not a specimen of blood, but according to the statistics of the National Socialists for the 4 year of occupation, about 80 thousands were born without speaking. 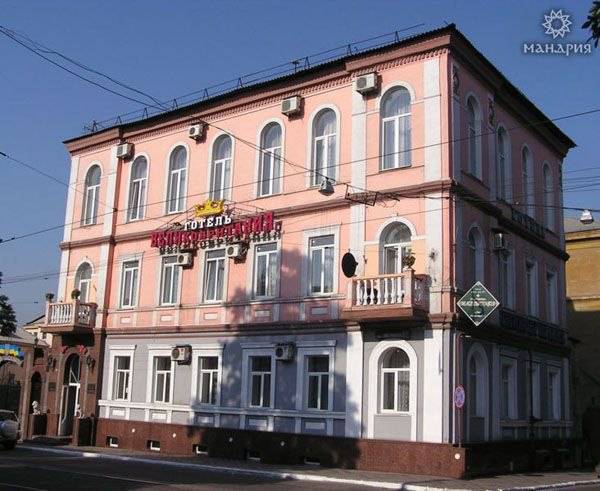 14. In March, 1942, the commander-in-chief, Jerez, gave the order to create brothels in the occupied territories of the USSR. The Nazis were afraid of partisans and sexually transmitted diseases. The girls were strictly selected. Particularly welcome Latvians, Lithuanians and rooted Germans. Similar motel "UK" exists to this day. 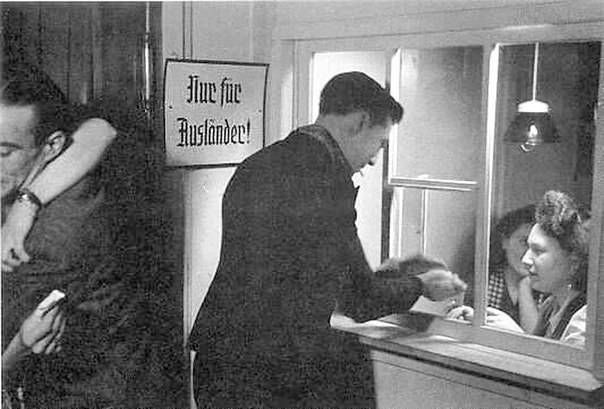 15. The mercenary pays for the prostitute. On the wall is a sign "For foreigners only!" 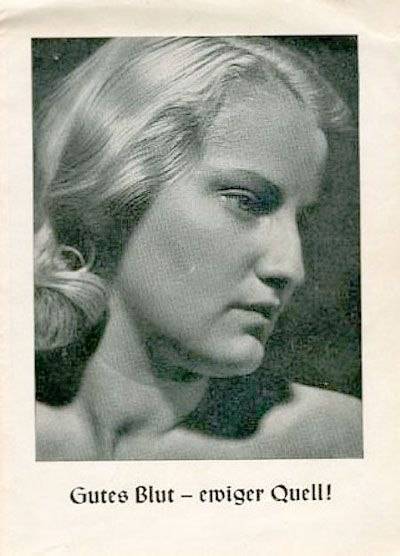 16. Good blood is the eternal source! Ideal, according to the Nazi parameters, to work in brothels. 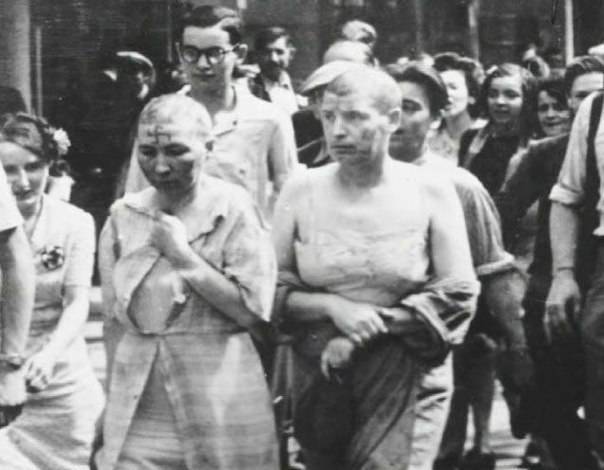 17. Not all the girls went voluntarily, there were those who saw salvation in the work of a concentration camp prostitute. 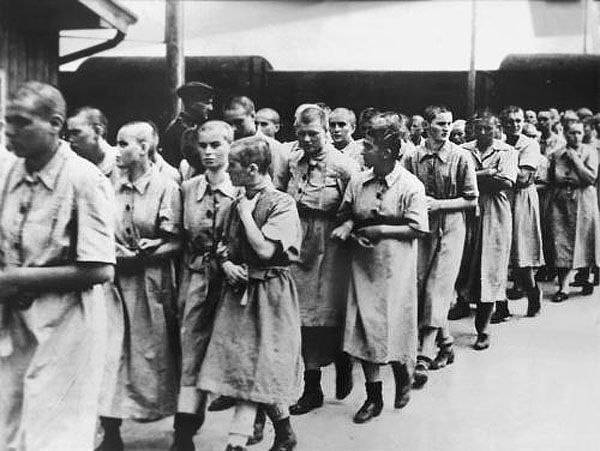 18. Prisoners in Auschwitz. The girls selected for the brothels were injected with calcium, forced to wash in disinfection baths, irradiated with ultraviolet lamps and fed better than other prisoners. 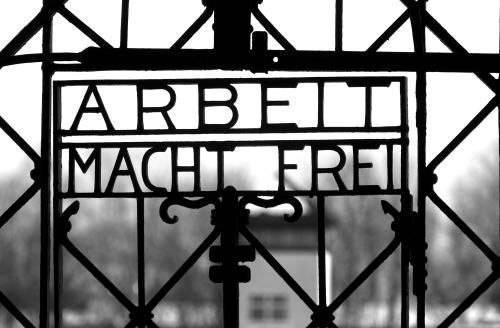 19. Gate of the Dachau concentration camp. "Work is free."