11 Thousands of Soldiers Fight Against Civilians in Eastern Ukraine

April 24 2014
190
Today NEWS published a statement by the Minister of Defense of the Russian Federation Sergey Shoigu that at present in the territory of Eastern Ukraine more than ten thousand fully armed Ukrainian military men have come out against civilians. In addition, approximately 160 were also involved in this operation. tanks, more than two hundred infantry fighting vehicles and armored personnel carriers, about 150 guns and mortars, not to mention air transport. 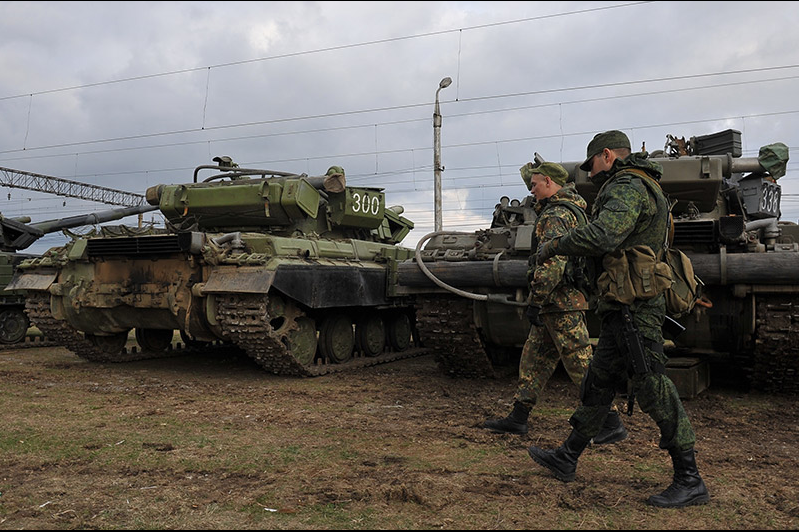 Today, Vesti published a statement by Defense Minister Sergei Shoigu that at present, in the territory of Eastern Ukraine, more than ten thousand fully armed Ukrainian military have opposed civilians. In addition, approximately 160 tanks, more than two hundred infantry fighting vehicles and armored personnel carriers, about 150 guns and mortars, not to mention air transport, were also involved in this operation.

According to the General of the Russian Army, the situation in the south-east of Ukraine is a matter of serious concern. For more than two days, the Ukrainian authorities have been active in the eastern part of Ukraine, as a result there are casualties.

According to Shoigu, against the civilians were made guards units, as well as battalions of extremist radicals "Right Sector". There is information that the formation of a new battalion "Donbass" has begun. Also, significant forces of special forces of the Security Service of Ukraine, as well as the Ministry of Internal Affairs, were sent to Donetsk and Lugansk to suppress the actions of the civilian population.

Thus, on the border with Russia, armed groups are currently operating to carry out sabotage activities. According to available information, tank and mechanized brigades transferred from the West of Ukraine participate in operations.

At the beginning of the military operation conducted by the current Kiev authorities in Slavyansk, at least five people died. According to the Ministry of Internal Affairs, in the north-east of the city three checkpoints were destroyed. Meanwhile, the leadership of the national militia for their part said that one checkpoint was able to recapture thanks to the reinforcements that arrived in time. According to Ukrainian media, the attack on the city is suspended.
Ctrl Enter
Noticed oshЫbku Highlight text and press. Ctrl + Enter
We are
Reports from the militia of New Russia for 29 August 2014 of the year
Military Reviewin Yandex News
Military Reviewin Google News
190 comments
Information
Dear reader, to leave comments on the publication, you must sign in.