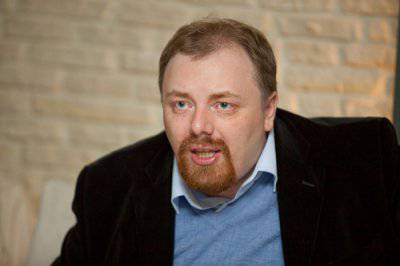 The junta puts on the scenario of slaughter with the hands of mercenaries, pravosek gangs and that part of the army, which was brought to gangs by hunger and filth. And this is where the main danger lies. The junta has no forces to win the civil war.


As a person who has consistently pointed out all the last months that Russia will have to intervene in the situation in Ukraine, not only diplomatically and politically, but also militarily, the last thing I really want to do now is to write pompous words and calls in the “Rubicon crossed!” Style.

Nothing new, unexpected and sudden happened. It all happened in December 1991, when Ukraine officially declared independence, when Belovezhsk agreements that destroyed the USSR were signed as a result, when the technical borders inside the USSR became state, when from space historical The whole South Russian segment was cut out alive for Russia, when 11 million Russians by passport and more than 20 million Russians by language were cut off from Russia by the border.

The state of Ukraine was formed as a "non-Russia" and "anti-Russia" and made sense only in that capacity. Its rulers and ideologists were well aware that they own someone else's - in fact, stolen - property: territories and people.

And there were only two ways to make someone else's - their own.

International: joining all sorts of Western structures that can guarantee the borders: EU, NATO, etc. Internal: accelerated Ukrainization, the forced conversion of Russians living in southern and eastern Ukraine into Ukrainians.

In other words, by its very existence, Ukraine was doomed to anti-Russian geopolitics and to anti-Russian domestic and cultural policies. This could be carried out in extremist forms, as under Yushchenko, after the first Maidan.

It could have been in relaxed and crafty forms, like under Yanukovych, but the direction of Ukraine’s movement was one to legalize its borders through Western structures, to create a homogeneous mass of citizens with the help of universal Ukrainization. Russian as a Russian was supposed to die, to be replaced by "Ukrainian."

At the same time, everyone was well aware that there were no “Ukrainians” in the sense in which Ukrainian propaganda spoke of them. This was confirmed by, on the one hand, the Ukrainian nationalists, who had difficulty romatizing the Ukrainian, and on the other - quite a few ethnic Great Russians, who willingly and aggressively fit into the Ukrainians and demonstrate the yellow-black and sometimes red-black identity.

With the same right, elves who have their own language, a story invented by Tolkien, uniforms and even signs of appearance, could occupy the Neskuchny Garden and declare it non-occupied.

I myself have acquaintances, full-blooded Great Russians, or carriers of a “bunch of blooded people” who turned into zealous Ukrainian nationalists, calling for Russian rebels “Colorado”, Russia as an “occupier” and ethnic Ukrainians who are much more borzoi.

The division is generally not of an ethnic nature - the rebels in the Donbass have characteristic South Russian and Little Russian types, Ukrainians can often be mistaken for Moscow creaks. Before us is not a conflict of ethnic groups, we have a conflict of civilizations and worldviews, where the side is determined not by blood and soil, but by free will.

Moreover, the right of the soil here is just on the side of the insurgent Donbass, which protects its lifestyle, its history, its small homeland, its loved ones. Who in the Donbass friend or stranger is very clearly visible. The “Russian Spring” has become a strikingly beautiful national, social, and patriotic uprising “for one’s friends”.

At some point, Ukraine crossed its red line. Instead of slowly creeping into Western superstructures, jumps and jumps began. What is not jumping - that Moskal. Instead of suffocating Ukrainization, Ukrainization is aggressive, with bouts of hatred at the official level addressed to the Russian inhabitants of their (supposedly) country.

With Euromaidan's Twitter, choking with delight: “finally, the separatist reptiles began to kill.” At the same time, the price of this euromaid delight immediately became visible. Ukrainian army refused to fight. The Ukrainian special services are fighting reluctantly.

Ukrainian police partially moved to the side of the people. That is, no one supports the top bloody fantasies of the junta and euromaidan: a civil war is not the choice of the Ukrainian (in a good sense of the word) people.

The junta, as a result, puts on the script the slaughter with the hands of mercenaries, pravosekov gangs and that part of the Ukrainian army, which was brought to gangs by the state of hunger and filth. And this is where the main danger lies. The junta has no forces to win the civil war.

But the forces to start a massacre and a horrific war of all against all, which will cause a humanitarian catastrophe with millions of refugees, are quite enough. They have enough strength to push the East of Ukraine into chaos and criminal terror.

Turned-down Ukrainian units with gangs weapons and armored personnel carriers who steal food and phone charges from militias. The gangsters who decided that their time and their power had begun (the leaders of the Donetsk People's Republic already point out with alarm).

On the other hand, the fragmentation of militia groups under the influence of political differences and conflicts of ambition (as is now planned in Lugansk). The terror of Kolomoisky - Yarosh in Dnepropetrovsk ... All this threatens the tragedy of millions of people.

It is necessary in order to prevent this beautiful, fertile, industrious land from turning into a space of bloody chaos, into a “zone”, into a territory of lawlessness. In order for automatic gunfire, night firefights, abductions not to kill the joy of spring bloom and the smiles of children.

The Donbass and the whole of Novorossia will figure out and self-identify who they have to be with — the criminals from Kiev, Moscow (we also have our own shortcomings, but on the whole, the choice of the Southeast is clear) by itself.

We need liberation from the total lie ukrohebbelsovskoy propaganda. Speaking in a simple way, people need to “sweat” and figure out how to live tomorrow. In Crimea, Russia managed to play a proactive. Here we are late, but now still the delay is not critical.

They say that on the sides of the equipment, which hundreds of people now see moving towards the Ukrainian border (although at the time I wrote this text, it has not yet crossed it) it says: “Peacekeeping forces”. This is the main thing that the tortured East of Ukraine needs. Peace and order. Russian order for the Russian world.