Ukraine after Geneva: the West invited Russia to the war 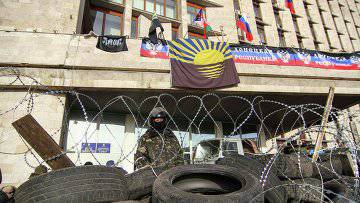 Battle reports from the Eastern Ukrainian front and talks in Geneva push out equally important from the information space news. The economy of Ukraine is rapidly dying, which forces the acting. the authorities in Kiev will radicalize the situation in the republic and throw new logs into the flames of civil war.

The Geneva talks, as expected, did not bring any positive news and in no way changed the policy of the West towards Ukraine.

Kiev the day after the meeting reported that it had already fulfilled all the requirements set forth in the agreement, including dealt with the militants on the Maidan. It turns out that they are absolutely legal there, therefore, there is no need to disarm them. The rebels are the same. authorities give a few days to surrender weaponsthreatening the continuation of the "anti-terrorist operation."

The Army of the Southeast, realizing that Kiev is not responsible for the promises given to them and openly lying about the fulfillment of the Geneva demands, is not going to retreat and hand over its weapons.

At the same time, Russia is not only demanded to withdraw virtual militants and terrorists from the eastern regions of Ukraine, but also to bear responsibility for the formation of insurgent regions that are not under its control. Otherwise, new sanctions packages will come into force.

The Kiev government, which is rapidly losing control over the situation, got several days to regroup and prepare provocations — it’s hard to think of another reliable way to force the army and security forces to shoot to kill. And without blood, Kiev will very quickly lose the remnants of power, even in loyal regions.

The main result of these negotiations - neither the West nor Kiev do not want peace. Kiev by thoughtlessness, and the West - based on their own long-term interests.

Chaos and nothing but chaos

While Ukrainian, and world viewers are distracted by news from the Donbass, the Ukrainian economy convulses. The promised money is not visible: the West has continued to feed Kiev with promises about lending for the second month. The hryvnia depreciates, the National Bank does not have the resources to keep its course. Attempts to fill the treasury end only aggravating the already catastrophic situation. So, drugs have already risen in price for 50 – 70%, prices for imported goods and fuel (mainly imported) have soared, utility tariffs have become very heavy for the population. In fact, most of the population of the republic is rapidly losing its meager savings and in the coming months will be below the poverty line.

In general, compared with January – March 2013, industrial production in Ukraine fell by 5%, and in the Donbas, which became the center of a popular uprising, the decline amounted to 13% (it should be noted that the uprising was not the cause of this decline, but its consequence). Ammonia and steel production decreased by 25 and 12%, respectively, coal production decreased by almost 9%. Even the production of vodka, an affordable and legal antidepressant, has fallen by half.

And this is just the beginning. In May, chemical plants owned by oligarch Dmitry Firtash may be suspended. Total 4 plants (Severodonetsk, Gorlovka, Cherkasy, Rivne), each of them works from 4 to 9 thousands of employees. This is not only a serious blow to local budgets and households. The chemical industry is one of the currency suppliers. That is, the chemical industry paralysis creates additional pressure on the hryvnia exchange rate.

The fall of industrial production could not affect the energy sector. Because of the reduction in energy consumption, we had to disconnect from the grid one reactor at the Rivne and South Ukraine NPPs.

Thus, a social explosion is inevitable and will occur even faster than previously thought. The West and Kiev, which is under its control, cannot realize this fact. Consequently, they are quite satisfied with this situation. The US needs to turn Ukraine into a platform for self-sustaining chaos, with its shortest export to the territory of Russia. The European Union, judging by its policy, decided to commit an act of suicide.

Based on the foregoing, the aggravation of the situation is inevitable, since:

1. Corresponds to the US strategic goals of disrupting Eurasian integration.

2. Allows the putschists to stay in power, albeit with the loss of some regions.

4. It leaves Russia no choice and draws it into the flames of the Ukrainian civil war.

Thus, the Russian Federation once again leaves no choice and does not provide space for maneuver.

With such a development of events, Moscow will have no other way than to use the troops to restore elementary order in the territory of Ukraine. It seems that it is already impossible to keep Ukraine united, it is too late to conduct federalization, especially since no one except Russia and the insurgent regions accepts it. The split line between the Russian-speaking and Ukrainian-speaking regions is becoming so wide that it cannot be overcome.

So, Russia was once again drawn into the inevitable war on its borders. The war is not with regular units, but with sabotage groups, criminals and militants. Ukraine is being turned into the European equivalent of Somalia.

And since ignoring the “invitation” to war will not work, then there is only one way out - to accept it and win.

Ctrl Enter
Noticed oshЫbku Highlight text and press. Ctrl + Enter
We are
A great interview with Sergey Lavrov: about Ukraine, Obama and IranWhat you didn't want to know about England
Military Reviewin Yandex News
Military Reviewin Google News
111 comments
Information
Dear reader, to leave comments on the publication, you must sign in.