The construction of the State Center for Unmanned Aviation continues 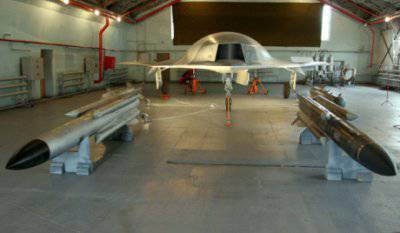 In the Moscow Region Kolomna, the construction of the State Center for Unmanned aviation ministries of defense. A new organization within the military department is being created on the basis of the Interspecific Center for Unmanned Aerial Vehicles. The task of the State Center will be the training of personnel and the training of unmanned aerial vehicle (UAV) operators. All work on creating a new organization should be completed before the beginning of next year.


According to the press service of the Ministry of Defense, at present, as part of the creation of the State Center for Unmanned Aviation, various works are being carried out on the reconstruction of existing facilities and the construction of new ones. Repair and renovation of research and educational buildings, barracks, canteen, library and a number of other facilities of the future State Center is underway. By the end of the year, a medical center with an infirmary, a typical universal sports training complex, a stadium, a hostel, and the necessary communal infrastructure should appear next to these facilities.

After completion of the construction, the State Center for Unmanned Aviation will train specialists for various departments. The organization will begin to train military personnel from various departments, as well as representatives of various law enforcement agencies and executive authorities, who will have to work with unmanned aerial vehicles. The creation of the State Center will allow optimizing the educational process and increasing the efficiency of training specialists.

While the State Center has not started its work and the construction of its facilities continues, the training of future UAV operators is conducted on the basis of the Interspecific Center of unmanned aerial vehicles. The training is carried out by military personnel who have been selected in accordance with the requirements for their qualifications. Training begins with a course of theoretical training, in which future operators study the design of equipment and features of its operation. Having mastered the theoretical knowledge, students are moving to the use of simulators. With the help of the latter, future specialists receive the necessary skills. The course ends with practical exercises using the UAV in the conditions of the landfill.

An additional task of the Interspecies Center, and in the future of the State Center, is the testing of new unmanned aerial vehicles offered for supply to the armed forces. The center is a platform for conducting military tests of new UAVs before they are put into service. During such events, employees of the organization check the real capabilities of the new equipment, and also prepare recommendations for the front-line units, who will have to use it. If necessary, experts assist and advise manufacturers of unmanned vehicles.

A few months ago, the Ministry of Defense published information about the work of the Interspecies Center for unmanned aerial vehicles last year. According to the announcement, in 2013, this organization trained 800 specialists with skills to work with new equipment. Plans for the current 2014 year involve the training and retraining of 900 UAV operators. Trained personnel are sent to serve in the appropriate units of all military districts.

In accordance with existing plans, the National Center for Unmanned Aviation of the Ministry of Defense should start work in 2015 year. Structural transformations and construction of new facilities will allow this organization to work with greater efficiency, including preparing a larger number of specialists. This will speed up the process of equipping troops with unmanned aerial vehicles and personnel with the necessary training.

At present, only reconnaissance UAVs of various classes are used in the armed forces and power structures of Russia. This technique allows units to conduct reconnaissance of enemy positions and monitor the necessary areas. Some of the used UAVs are equipped with a combined surveillance system with a video camera and a thermal imager, which allows monitoring at any time of the day.

It is noteworthy that the UAVs in the troops are used not only for military purposes. Now several units equipped with such equipment are involved in extinguishing fires in the Chelyabinsk region. The drones Zastava and Orlan operate from the Chebarkul training ground, while the heavy Forpost UAVs are relocated to the Shagol airfield. The task of the operators of these systems is to monitor the situation in the forests and the detection of fires. The information received is transmitted to the relevant units of the Ministry of Emergency Situations, which are engaged in direct fire fighting.

In the future, the State Center of unmanned aircraft will increase work. Now there is a development of new UAVs of several types of different classes, including heavy and shock. Apparently, upon the achievement of the corresponding stages by the projects, it is the specialists of the State Center that will be engaged in checking the new technology. After the adoption of new UAVs, the Center will begin training the operators of this technology.

Ctrl Enter
Noticed oshЫbku Highlight text and press. Ctrl + Enter
We are
The action “Military service under the contract is your choice!” In Rostov-on-Don: future contract servicemen, exhibitions and “Russian Knights”Combat use of unmanned aerial vehicles
Military Reviewin Yandex News
Military Reviewin Google News
22 comments
Information
Dear reader, to leave comments on the publication, you must sign in.