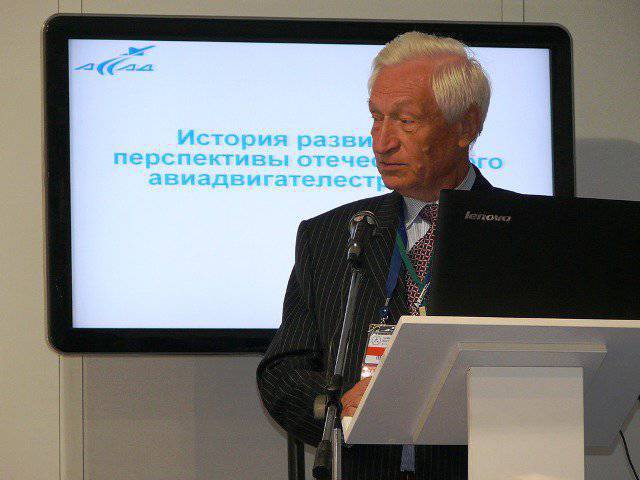 April 18 in Moscow ended the first International Engine Forum MFD-2014. This is the direct heir to the Engines salon, which everyone is used to. They were held once every two years, “through” the MAKS, mainly due to the ascetic activities of the Association of Aircraft Engine Building Association (ASSAD), headed by permanent president Viktor Chuyko. But today, due to the complication of relations between Russia and Ukraine, there was a feeling that aviation (first of all) engine building is tested for strength.

Salon "Engines" ahead of MAKS, the first was held in 1990, under the motto "Give me the conversion!". More grinders, juicers, mini-tractors and other non-core products to the national economy from the aviation industry. In 1992, this nonsense was forgotten - the question arose of the survival of the country's most high-tech enterprises. Assad is also a product of the collapse of the USSR. If we discard everything that is written down in the organization’s tasks and isolate the main goal, then it becomes clear that the ASSAD was created at the time of the collapse of the Land of the Soviets as a counterweight to the centrifugal political forces. No wonder that V. Chuiko, who headed the association, has been in charge of engine building since 1984 as deputy minister of the aviation industry. And you can not deceive yourself, parading the membership in the ASSAD of firms from the USA, France, Germany and Canada - it pleases the eye, but nothing more. It was fundamentally important to preserve the production and scientific cooperation of hundreds of enterprises of the aviation complex of Russia with Belarus and Ukraine. And Ukraine in the first place. One had only to break the thin and fragile web of industrial relations due to the political ambitions of the authorities, and hundreds of large enterprises would have collapsed into oblivion, having irretrievably buried their own aircraft and helicopters from scratch under their own fragments of technology. When the aviation industry was built in the USSR, they were guided solely by pragmatic concepts, not really looking at the maps of the administrative and territorial division of the country. One of the most striking examples is that overnight the Moscow Ilyushin Design Bureau is left without the largest and basic aircraft factory. Tapo them. V.P. Chkalov, then building the Il-76 and Il-114, remained abroad, in Uzbekistan. Now Ukraine has become a headache for everyone.

Location - Moscow. 51% retains the JDC, 49% - Motor Sich JSC and Ivchenko-Progress state-owned enterprise. The task is the joint development of promising aircraft and helicopter engines. To have certificates for these engines, the parties will be in equal shares. In Zaporozhye, UEC representatives selected eight new engines, for further work on them, certification and production within the framework of a joint engineering center. Probably, the 5 generation engine D-27 (from the An-70) and its promising version of the AI-727 - harnessed, ultra-high bypass ratio, with a fan drive through the gearbox, were among them. This is the future of civil aviation. Excellent traction with high efficiency.

Its counterpart in Russia, NK-93, twice as powerful, ready for production ten years ago, turned out to be unnecessary and gathering dust in the warehouse of OAO Kuznetsov. He made three test flight. Officials of the Ministry of Industry and Trade claim that there is no aircraft for it, it is a technology demonstrator, the engine is outdated and needs to be modernized. So upgrade! Or give the groundwork to the Ukrainians within the Center. Unless, of course, Kiev does not break the wood.

In spite of my mother froze my ears

Immediately caught my eye - the most prominent and important guest, Hero of Ukraine and President of the Motor Sich JSC of Zaporozhye Vyacheslav Boguslaev, as usual, impetuous and loud, unusually closed. He, a fantastically energetic man, was not embarrassed in the past by the Yushchenko-Tymoshenko’s “Pomeranchevaya Revolution”, he was optimistic, even when euromaidan sent curses towards Moscow, did a “good mine in a bad game” when Crimea rushed into the arms of Russia. He always stood firm on his own - the Ukrainian aviation industry is untenable outside cooperation with Russian institutions and enterprises. And with all his strength he fought for this very cooperation, overcoming obstacles both in Russia and in Ukraine. He is a politician, businessman, designer and technologist of the highest level, always thinking in strategic categories, ahead of time, other politicians and Russian officials. President Yanukovych gives press conferences in Rostov-on-Don, First Deputy Prime Minister of Ukraine Vitaly Yarema announces in early April that he intends to stop military-technical cooperation with Russia. But Boguslaev, know his oppression, speaks about the creation in Moscow of a joint engineering center for engine building.

But today, a disturber of peace and, perhaps, a greater patriot of Russian aviation than many leaders of the United Aircraft Building Corporation (UAC) and the United Engine Building Corporation (UEC) (I emphasize, this is purely my personal opinion), events in southeastern Ukraine leaned on the unbearable press, in Zaporozhye. I am sure that the Kiev authorities and the “maydanous patriots” of all stripes put pressure on Boguslaev. It is enough to look at the publications in the Ukrainian press: “Whatever the justification, the Zaporozhye company Motor Sich closely cooperates with the aggressor.” This is about the international forum opened at the All-Russia Exhibition Center. By the way, prosecutors are unaware that the MFD-2014 is announced as a forum in the field of civil engine construction. But it is written correctly, according to ITAR-TASS. Especially for warming up the supporters of European integration, the article contains the words of Boguslaev, said not yesterday, but much earlier:

- Events in Ukraine do not affect the implementation of existing bilateral contractual obligations.

I will not restrain a couple of comments on the article; The first was a boorish character, hiding under the glorious nickname "KB Progress":

Replies to "CB Progress" some Noname, spoke about the "slaves of Motory":

- You, the woodpecker, do not understand that the sale of Russian engines is the help to Ukraine. Help with money that pays for engines, help with jobs at the plant and taxes to the treasury. You have completely gone crazy with his Svidomo.

It is worth noting that even the most pragmatically minded citizens do not cite a murderous argument in defense of the cooperation of Ukrainian enterprises with the Russian side - most of the equipment of the same aircraft and helicopter engines, aggregates, special alloys, materials for the “hot part”, bearings come from Russia. Without them, to do something and sell is impossible. So cooperation for Motor Sich is a matter of the existence of an enterprise. This is a response to the fact that “they say, we have enough exports to third countries.” Yes, out of about a thousand engines produced in Zaporozhye, only 400 is sent directly to Russia every year. But without supplies from Russia, the massive export of Ukrainian engines will turn into a category of painful nostalgic memories. Everyone will be sad.

If Russia tense up, then, according to the statement of Deputy Prime Minister D. Rogozin, in the extreme case, in two years, it will ensure independence from Independence Square. Of course we will lose something. For example, the replacement of D-18T engines for the heavy-duty An-124 "Ruslan" in Russia does not exist in principle. And in Zaporizhia, its modernization of the 4 series is almost ready - it has become more powerful, more economical, more environmentally friendly, and meets international noise requirements. To make an analogy - to spend many billions and at least a decade. The leaders of the UEC now had to think hard. General Director Vladislav Masalov voiced his concerns:

- In the new conditions, it is necessary to focus on the possibility of creating an engine for a heavy transport aircraft.

And then he doubted:

- The An-124 aircraft fleet is relatively small, so you need to weigh the pros and cons.

From myself I would add - the lack of high-power engines in the production line of the UEC played “against” the wide-body IL-96, which came out on the line in a “shortened” form. And if Russia had engines with 35 – 40 tons, then our Airbus could well become a hit - two engines instead of four are always preferable in terms of operator costs and fuel consumption. The twin-engine IL-76 would also look good. Huge "Lun" ekranoplanes, whose construction is periodically threatened to resume, with such three or four particularly powerful engines (instead of 8!) Would become much more attractive for the military and not only. Western manufacturers have relatively recently come to taste and build "forty-ton". Thanks to them, the giant Airbus A380, the innovative Dreamliner, the Boeing 787, are rising. We have an engine with tons of 44 existed in the drawings back in 1992 year, in Samara, the general designer ND. Kuznetsova. Planned it on the "Super Airbus" Tupolev Design Bureau. But that time was not the best for breakthrough developments - there is no engine, no aircraft.

The motor has always been the most complex and high-tech part of the aircraft. Hundreds of beautiful aircraft of the most eminent designers of the whole world remained in the category of “prototypes” - the engines promised by the engine builders either didn’t bring to mind the reliability or did not deliver the declared characteristics.

At the UEC stand, Perm engine builders were pleased - the promising PD ‑ 14 was already in hardware. In the year 2015 will proceed to flight tests. There is a chance that they will have time to “cling” to the promising airliner MC-21. The new engine corresponds in performance to the most advanced world hits in its power class. They made a helicopter version of TV7-117В, it will be installed on the new Mi-38. The creators claim that they got the characteristics better than planned, exceeded the performance of the Pratt & Whitney engines installed on the first samples of the helicopter. In general, the worked out “before the ringing” of the reliability of the TV7-117 is the dream of the creators of the IL-114 regional turboprop type (turboprop) aircraft, the Il-112 light transport vehicles. Will - will not? We'll see…

Ctrl Enter
Noticed oshЫbku Highlight text and press. Ctrl + Enter
We are
What you didn't want to know about EnglandList of destroyed the largest and most high-tech enterprises
Military Reviewin Yandex News
Military Reviewin Google News
30 comments
Information
Dear reader, to leave comments on the publication, you must sign in.