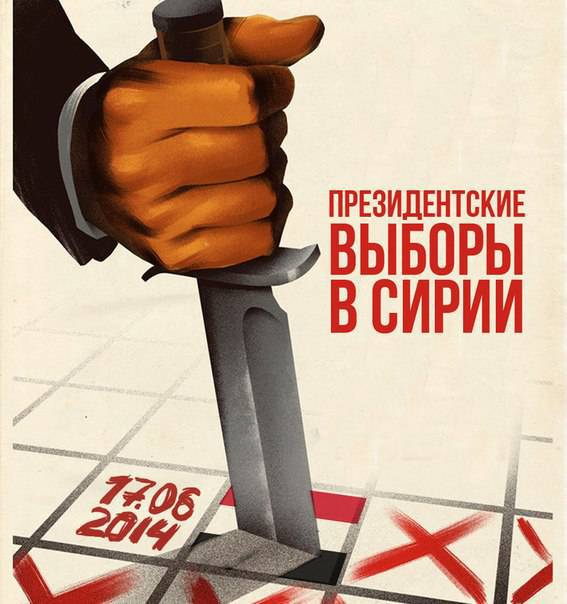 Syria has begun the process of nominating candidates for presidential elections. The People’s Council announced the voting date - 3 June 2014. Syrian citizens, who are currently abroad, will be able to vote with 28 May.

According to the law, a Syrian citizen at the age of 40, whose parents are also Syrian citizens, can become president. A prerequisite is to live in the country for the last 10 years, which is a reasonable requirement - the head of state must live by the interests and aspirations of his people, not foreign patrons.

The process of registering candidates has already started - it will last until May 1. According to the chairman of the SAR People’s Council, Muhammad Jihad Al-Liahham, applications from candidates will be accepted by the Supreme Constitutional Court.

The first presidential candidate has already been nominated - Maher Abdel-Hafiz Hajar, a member of the SAR People’s Council, has become one.

So all the talk that the elections are supposed to be non-alternative, that Syrians who are abroad cannot take part in them - all these conjectures are completely inconsistent and have nothing to do with reality.

However, in the West they came to complete absurdity - local politicians ... condemn the very fact of holding presidential elections in Syria.

UN Secretary-General Ban Ki-moon said that holding elections allegedly could "harm the political process" and "hamper the prospects for a political resolution of the crisis."

It is difficult to imagine a more absurd statement, for the “crown” of any political process is precisely the conduct of elections, especially the election of the head of state.

The policies of the United States, Britain, and the head of EU diplomacy, Catherine Ashton, were even more pronounced. They declared the “illegitimacy” of the upcoming elections in Syria, that they did not intend to recognize their results in advance.

White House spokesman Jay Carney called this election a “travesty of democracy,” but hypocritically added that “Washington continues to consider a political solution the only way to” get out of the Syrian crisis.

But one does not take into account the White House - without a free will of the people, no political decision can be called legitimate.

In the opinion of the Deputy Foreign Minister of Britain, Mark Simmonds, "Millions of Syrians who left their homes or living outside Syria will not be given the opportunity to vote. Elections held on this basis do not meet international standards, their results will not matter and will not be credible. "

But these words are refuted by the very law on elections in Syria, as well as by the decision to give citizens living abroad the opportunity to vote starting May 28. There will be plenty of time for each emigrant. Unless the governments of the states themselves, where the Syrians live, will not interfere with their voting. There may be difficulties with the will of the Syrians living in those countries that expelled the staff of the Syrian embassies from their territory - but, again, it will be the fault of those who expelled the diplomats, but not the Syria itself. And the question of democracy arises before these same states.

How many “critics” of all stripes accused President Bashar Al-Assad of allegedly “clinging to power”, “not wanting free elections”, “holding on to his post”.

And the Syrian leader, who is disobedient to the West, suddenly, unexpectedly for these very critics, showed: he does not want to cling to power, but offers legally, in accordance with the country's Constitution, to fight for the presidency by political means. Gives himself to the judgment of the people.

I recall that, according to the current Constitution, the head of state is elected for a term of 7 years. Previous elections were in July 2007. The term of Bashar Al-Assad, respectively, expires in July of this year. So the date for the new election is absolutely legal. The abolition of the elections would be a gross violation of the Constitution. But for some reason, the West is acting with such an absurd demand for the Syrian leadership - to violate the law, to violate the principles of democracy and the free will of citizens.

Still, perhaps, was not in stories such a precedent that external forces so rudely tried to interfere in the electoral process of this or that country. True, there have been cases when the West demanded that other countries call early elections (which, in fact, is also outside the law, as it is a gross interference in the internal affairs of sovereign states and contrary to the UN Charter). But to try to force any state to cancel elections, which are held in constitutional terms - this is nonsense!

In this case, there is, as always, double standards. So, the elections, appointed in Ukraine, are recognized by the West as obviously legitimate, although the date of their holding is absolutely not based on the constitution. Moreover, according to the peace agreement between the government and the opposition of Ukraine, these elections should be held in December 2014 of the year (and according to the constitution - in 2015). However, the Ukrainian orange "opposition" has crushed both the law and the agreement - but Washington and the EU do not seem to care.

Not surprisingly, American politicians continue to blame only one of the parties to the Syrian conflict. A spokeswoman for the US State Department, Jennifer Psaki, said in her usual manner: “The call for a de facto referendum sounds particularly false now as the regime continues to slaughter its electorate, the electorate it intends to represent.”

Past reports of mortar attacks, which “oppositionists” gangsters are subjected to residential quarters, and the terrible terrorist attacks in Homs over the last 2 weeks, and the terrible fate of Christian Maaloulee, and, of course, about expelling the residents of Kasab by terrorists and its surroundings. The naked accusations against the “regime” are nothing more than an element of a psychological attack designed to justify an absurd statement condemning the holding of elections in Syria.

The terrorists, meanwhile, continue the brutal killings of peaceful Syrians. Even on Holy Easter, April 20, they bombarded Arnus Square in Damascus with mortars, killing two children, aged 2 and 12. Two adults were also killed and 8 people were injured. Another shell hit the Umayyad Square, resulting in three people injured.

21 in April in the capital quarter of Salkhia gangsters fired at the school “Dar As-Salam”. Two citizens died, 36 injured. On the market in the area of ​​Zablatani, 5 mortar shells were fired, there were casualties, and material damage was caused. Two mortar shells hit the Bab Tum block - two dead, 23 injured.

In the province of Homs, the villages of Umm Al-Sarj and Kafr Nan were subjected to mortar shelling. Three people were killed, including a little girl. There are also wounded. In the city of Homs a sniper shot wounded journalist - correspondent for the radio station "Sham-FM" Khaidar Razuk.
22 April three people were injured because of the shelling of a city in a residential area of ​​the city of Harasta province of Damascus. Another was injured in the same city when a sniper bombarded his car in which he was driving.

In the province of Homs, militants planned another terrorist attack using a mined minibus. Fortunately, the car exploded before the attackers managed to park it somewhere in a crowded place. As a result, only the criminals themselves died.

Mrs. Psaki, who brazenly blames the deadly sins of the Syrian government, seems to be unfamiliar with similar messages that come from various cities in Syria every day. And if the leadership of the SAR seeks to resolve all issues by political means, through general elections, then the pro-American and pro-Western “opposition”, fearing a vote of panic, not having bright leaders who could fight with Bashar al-Asad - this very “opposition” continues methodically kill innocent Syrians.

Ctrl Enter
Noticed oshЫbku Highlight text and press. Ctrl + Enter
We are
Situational analysis of the death of the MH17 flight (Malaysian Boeing 777), made on the basis of engineering analysis from 15.08.2014Results of the week. “Achtung! Achtung! Die russischen Panzerkampfwagen marschieren nach Kiew! ”
Military Reviewin Yandex News
Military Reviewin Google News
15 comments
Information
Dear reader, to leave comments on the publication, you must sign in.