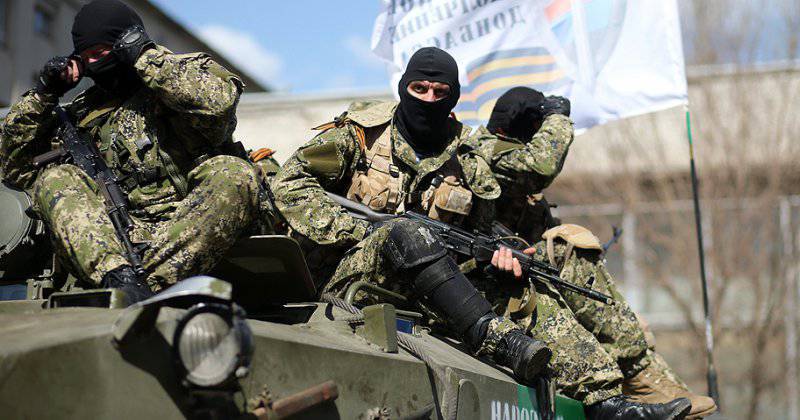 According to The New York Times, the militias in the south-east of Ukraine are the Russian military. However, the moment of guessing who exactly is in the territory of Eastern Ukraine is not even in the second, but in the tenth place. And in the first place is a political settlement and how it is carried out.

On Sunday, April 20, the American newspaper The New York Times published an article entitled “The photos indicate masked people in eastern Ukraine and Russia”. It argues that armed supporters of federalization in eastern Ukraine are related to Russia.

“For two weeks, mysterious, well-armed people, called“ green men, ”seized administrative buildings, stirring up separatist unrest. The Kremlin has denied many times that there is a secret invasion of the Russian forces, ”the authors of the article, journalists Andrew Higgins, Michael R. Gordon and Andrew E. Kramer, point out.

“Now, the photos and descriptions that came from eastern Ukraine, and on Sunday recommended by the Obama administration, suggest4 that many of the“ green men ”are really Russian military and intelligence officers,” the publication says. The equipment is like that of Russian special forces in the Crimea, some are “identified on other 1 photos clearly made surrounded by Russian military in other places,” the authors report.

According to the Security Service of Ukraine (SBU), a Russian is in the ranks of the "green men" - Igor Ivanovich Strelkov, an employee of the GRU. “They say that he has a long track record of serving as an illegal in the Main Intelligence Directorate of the General Staff of the Russian Federation, recently in Crimea in February and March, and now in the city of Slavyansk and its suburbs in eastern Ukraine,” writes The New York Times.

“There is a wide consensus in the international community about Russia's connection with some of the armed militants in eastern Ukraine, and the photos submitted by Ukrainians last week only further confirm this. That is why US officials continue to justify this opinion, ”said Jen Psaki, the State Department spokesman, on Sunday.

The New York Times states: “direct evidence of the“ hands of Russia ”in Eastern Ukraine is contained in a dossier of photographs that Ukraine submitted to the NUMX in the OSCE.”

“These are photographs of unidentified armed men, made in Eastern Ukraine, and an earlier photograph, where, it seems, the same people appear in the group picture of servicemen of some part in Russia,” the article says. The same armed man, possibly captured in pictures in the Crimea and Slavyansk. “On another photo is a portly bearded man 1, photographed in Slavyansk on April 14, dressed in a camouflage uniform without insignia, but 6 had been photographed years before during the Russian invasion of Georgia with a Russian special forces patch on the left sleeve,” the American newspaper writes.

In the publication of The New York Times there is a moment that casts doubt on the veracity of the stated version. The authors refer to as one of the evidence for an audio recording, previously distributed by the SBU. According to the Security Service of Ukraine, this is an intercepted conversation between Russian agents in eastern Ukraine, including a certain person nicknamed “Strelok” and their boss in Russia.

Commenting on this conclusion, a source in the Russian Ministry of Defense told RIA “NewsThat the entry published by the Security Service of Ukraine is fabricated. “Not only the authors of this opus, but also their puppeteers would like to better teach the material part and instruction on intelligence. And such slang, which is used in the “super-interception”, was used only by the pioneers in the game “Zarnitsa”, ”the agency’s source said.

If other evidence, allegedly presented by the OSCE mission, is covered with white threads, it can be assumed that the publication in The New York Times is part of the game, perhaps the American special services. It is possible that this game is associated with a visit to Ukraine by 21 on April, Vice-President of the USA Joseph Biden. According to the official version, Biden will discuss with the local authorities the situation in the east of the country, issues of decentralization and constitutional reform, as well as energy independence. But perhaps one of the goals of the visit is to find out how realistic it is to weaken Russia's position with regard to the Ukrainian conflict. In this case, evidence of the involvement of the Russian Federation in the events in the east of Ukraine play2 Biden on hand.

Indeed, in this case Russia bears image losses. Then they lose the persuasiveness and tough position of Russian Foreign Minister Sergei Lavrov that it is Kiev that is disrupting the implementation of the agreements reached in Geneva at a meeting of representatives of the United States, the European Union, Russia and Ukraine. Russian President Vladimir Putin appears in a completely different light, who during the “straight line” declared that “there are no Russian units in the east of Ukraine, no special services, no instructors, these are all local citizens”.

To figure out what is really behind the publication in The New York Times, we interviewed our experts.

A former employee of the Prosecutor General’s Office of the Russian Federation who, as part of an investigative team, took part in uncovering resonant terrorist attacks in Moscow:

- This is a fake, and so frank that in The New York Times were forced to use low-quality photos. If you directly “identify the bearded man from Slavyansk” on Google, the very first link to the Ukrainian site gives an article with a better picture of the same bearded men. In normal quality, it is clear that supposedly the same bearded man is two completely different people. They are just like having a beard.

The bearded man from Slavyansk is given in several angles - he posed: in profile, in front, in every way. A bearded man, who allegedly stands surrounded by Russian troops, appears to be an employee of the Chechen battalion "Vostok". On large photos, it is really clear that he is surrounded by Chechens, and he himself, if you look closely, is not of a standard Slavic appearance, but rather of a Chechen one - this is the type of Chechens.

The other two people who are circled in the New York Times cannot be identified at all - there are no facial features in the photographs. It can be assumed that if the identification could be done, at least approximately, The New York Times would publish the highest quality photos - especially since they are publicly available.

On arms nothing can be said on the pictures at all. In the photo, where people allegedly seen in Slavyansk appear in the photo allegedly from another place and another time (and it is not known where it came from) - it is not clear who is with what weapon.

In a word, this is a clean throw, calculated on the absence of even minimal criticism from the audience. It is noteworthy that the image of the main person involved in the article - a certain Strelkov - is completely absent. Therefore, it is very difficult to talk about the identification of such a character - given the denial of its existence by the Russian side.

The record of allegedly intercepting a conversation with the "Strelkom", which the SBU distributed, is a rough gluing. It can be compared with the authentic interception of conversations of snipers who worked on the Maidan. There is a completely different slang, approach, manner of talking. Even in terms of the nature of speech, one can understand that professionals are talking on Independence, with each other and in business. And the record in which the "Shooter" appears is some kind of kindergarten.

As we see, the article in The New York Times refers to information that, with minimal criticism, reveals a complete inconsistency with reality. It’s not that every single proof has no weight, but even their totality speaks of a total informational forgery ...

Sergey Utkin, Head of the Department of Strategic Assessments of the Center for Situational Analysis of the Russian Academy of Sciences:

- This история curious in terms of the yellow press and the general public, but not politics. Just in this case, the 1 in the genre of yellow press - due to circumstances - are the leading US newspapers.

In fact, the Eastern Ukrainian "Zarnitsa" does not play a key role. We draw political conclusions about the prospects for resolving the Ukrainian conflict, based not on whether a particular person is in Eastern Ukraine. Establishing such a fact changes little. And the key issue - from the point of view of the Russian impact on the situation - is that Russia does not recognize the legitimacy of the Kiev authorities.

If - from the point of view of official Russia - Ukraine, in fact, does not exist as a state (the previous state collapsed, and the new was not created), anything can happen in the eastern regions. For example, self-organization of people - with or without Russian participation.

Yes, there are negotiations at the ministerial level between Russia and Ukraine, but their status is unclear.

In this situation, an attempt by the West to convict Russia of something is not constructive. Even if irrefutable evidence of the presence of Russians in the East will be presented, the West may receive an answer in the spirit of rather harsh statements. Like, so what? It's just that people help local people get organized. As an option - help to safely hold a referendum.

But, I repeat, the moment of guessing who exactly is in the territory of Eastern Ukraine is not even in the second, but in the tenth place. And in the first place is a political settlement - the way it is implemented, or not implemented. This is much more important than fixing suspicions.

If tomorrow, or a few days later, there is a clear signal from the Russian side that Moscow recognizes the Kiev government, and recognizes the results of the May elections (which are now an incomprehensible event for Russia, whose status is being eroded by Viktor Yanukovych’s statements), the situation will change drastically. I think, in this case, the Ukrainian government will have enough political resource to reach the people in the East, who are now trying to play the title role. Talk to them and make a decision. In this case (Moscow’s recognition of the Kiev authorities), residents of eastern Ukraine will understand that they have no alternative options other than dialogue with Kiev.

But with the Russian policy we are witnessing today, the East has a million alternative options. And in order to go on serious negotiations with the Kiev authorities, to go to the decision to hold a referendum or to participate in the presidential elections, there are no reasons for the East.

On the contrary, Russian policy convinces Eastern Ukraine that it is worthwhile for some time to fill its price, to demonstrate that Left-Bank Ukraine1 has an independent potential.

The main process is in the search for legitimate centers of power in order to understand with whom and for what reason we can talk. Everything else is curious at the level of the average man and spy novels, but no more.

Sergey Goncharov, President of the Association of Veterans of the Alpha anti-terror unit:

- I’ll add to the publication of The New York Times: allegedly the Americans, Turchinov and Yatsenyuk have evidence that the Russian 45 landing regiment operates in eastern Ukraine. From my point of view, all this - stuffing information.

Ctrl Enter
Noticed oshЫbku Highlight text and press. Ctrl + Enter
We are
Situational analysis of the death of the MH17 flight (Malaysian Boeing 777), made on the basis of engineering analysis from 15.08.2014Iran: better bomb than war?
Military Reviewin Yandex News
Military Reviewin Google News
76 comments
Information
Dear reader, to leave comments on the publication, you must sign in.