US destroyers conventions are not written 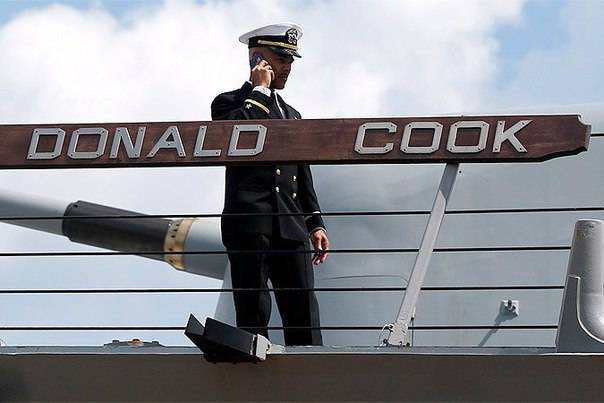 Recently, the third US military ship, the destroyer Donald Cook, and the French military intelligence ship Dupuy de Lome entered the Black Sea through the Turkish Bosphorus and Dardanelles straits. Shortly before the Russian Foreign Ministry announced a violation by Turkey and the United States of the Montreux International Convention (1936), which regulates the duration of presence and tonnage of foreign military vessels in the Black Sea basin. But the American and Turkish sides ignore Moscow’s position. The West clearly demonstrates military force in connection with the situation in Ukraine and with the reunification of Crimea with Russia.

In view of the increasingly frequent "visits" of NATO military ships to the Black Sea, Russian Foreign Minister Sergei Lavrov said that "the extension of the stay of the US Navy ships in the Black Sea often exceeded the deadlines set by the International Montreux Convention."

S. Lavrov clarified: “According to the Montreux Convention on the Status of the Straits, warships of countries that do not have access to the Black Sea can be in its water area no more than 21 days, and significant restrictions on the class and tonnage of the vessel have been introduced for them”.

According to the Russian Foreign Ministry, “The USS Taylor frigate entered the Black Sea 5 February, and the Mediterranean Sea 9 March this year, which 11 days exceeded the maximum allowed period and, accordingly, is a violation of the Convention. At the same time, the Turkish side did not inform us in due time about this delay. For our part, our concerns were brought to the attention of the American and Turkish sides in the form of verbal notes. ”

Recall that since Russia's access to the Black Sea and the expansion of its Black Sea territories, ensuring their security has always rested against the Turkish policy on military navigation through the Dardanelles - the Sea of ​​Marmara - the Bosphorus.

Russia's proposals to ban entry into this artery between the Black, Aegean Seas and the Mediterranean to the military courts of non-Black Sea countries have always been rejected by European powers and Turkey, and after the First World War - by the United States.

For example, the Crimean War (1853-1856) of the western coalition against Russia was made possible by the free access of European naval forces through the same straits. During the intervention of the Entente in Russia in 1918-1919. The western fleet also freely passed through these straits not only to the Black Sea, but also to the Azov and Danube ports of Russia. It is worth recalling that the allies of Russia categorically objected to the Russian naval operation in the Bosporus and the Sea of ​​Marmara during the First World War, which would quickly lead Turkey out of the war.

In 1915, the Entente wanted to seize Constantinople and, thus, close the Bosphorus and the Sea of ​​Marmara from Russia, but in vain! It was an unsuccessful Gallipoli operation 1915 of the year, conducted without the participation of Russian troops. However, in the course of the previous Russian-Turkish wars, the European powers threatened Russia with almost a collective invasion of its territory, if Russian troops “dared” to join Constantinople and capture the Bosphorus. But the perennial and numerous bloody battles of the troops of Russia and Turkey in the Balkans and in the eastern Turkish mountains, including in 1914-1917, did not cause discontent among the European powers: let more Russians and Turks kill each other. And although after the 1918 year, until the middle of the 1930, there was a warming of Soviet-Turkish relations, Ankara did not agree with the proposal of Moscow for the indefinite demilitarization of the straits and about the bilateral-Soviet-Turkish military provision of their security.

Under pressure from London, Paris and Washington 24 July 1923 was in Lausanne (Switzerland) signed an international Convention on the regime of straits. It was signed by the United Kingdom, France, USSR, Italy, Japan, Greece, Romania, Bulgaria, Yugoslavia and Turkey. The Convention provided for the demilitarization of the straits zone, but allowed free passage through the Bosphorus, the Sea of ​​Marmara and the Dardanelles, not only trade and passenger, but also military vessels of any country. Therefore, the USSR has not ratified the Convention. As follows from the statement of the Soviet NKID, "... due to the lack of adequate security conditions for the straits, the Black Sea basin as a whole and, accordingly, the southern borders of the USSR." In the future, the Soviet side was able to achieve a partial revision of the regime for the straits.

In the Swiss city of Montreux on July 21 1936, the current Convention on the status of the straits was signed. It was signed and ratified by the USSR, Turkey, Great Britain, France, Bulgaria, Romania, Greece, Yugoslavia, Bulgaria and Japan.

The document retains the freedom of passage through the straits in peacetime and wartime for commercial vessels of all countries. But the mode of passage of warships is different for the Black Sea and non-Black Sea states. With prior notice to the Turkish authorities, the Black Sea countries may, in peacetime, conduct their warships of any class. And for military courts of non-Black Sea states, class and tonnage restrictions have been introduced. Only small and auxiliary surface ships can pass here, and the total tonnage of non-Black Sea military ships in the Black Sea should not exceed 30 thousand tons, although this volume may increase to 45 thousand tons if the Black Sea countries increase their naval forces in the region. The stay of "non-Black Sea" military ships was limited to 21 days (Moscow insisted on 14 days, but the British achieved more).

As for the policy of Turkey in the straits, the following rules were introduced by the Convention: if Turkey participates in the war, and if Turkey considers that it is threatened by war, the Turkish side has the right to allow / prohibit passage through the straits of military vessels of any countries. And during the war, in which Turkey does not participate, the straits are closed for the passage of military courts of any belligerent power.

In addition, the Montreux Convention abolished the International Commission on the Straits established by the Lausanne Convention, its functions, and with them sovereignty in this region, were transferred to Turkey.

But during the Great Patriotic War, the Turkish straits were used by Germany and its allies for operations against the USSR. Seeking to smooth out such a hostile policy on the straits, at the end of February Turkey 1945 declared war on Germany and Japan. And since mid-April, 1945 has allowed the delivery of allied cargo to Soviet ports via the Dardanelles, the Sea of ​​Marmara and the Bosphorus. The total volume of these shipments to the Black Sea ports of the USSR in 1945 for the year amounted to 681 thousand tons, which roughly corresponds to 5% of all allied supplies to the USSR. Over 300 thousand tons arrived in Batumi, up to 100 thousand tons - in Poti, the rest of the cargo was accepted by the ports of Sukhumi and Tuapse. However, the USSR 19 March 1945 of the year denounced the Soviet-Turkish Treaty on Friendship and Neutrality (December 1925).

And then, 7 June 1945, V.M. Molotov told the Turkish ambassador to the USSR S. Sarper that “the desirable conditions for concluding a new agreement are a regime exclusively for the Soviet-Turkish control in the Black Sea straits and their demilitarization. With the deployment in this area of ​​the Soviet naval base under a long-term lease ”(similar to the Soviet bases of Porkkalla-Udd in Finland or the Far in China in 1945-1955). But Ankara rejected these projects.

At the beginning of the Potsdam Conference, Molotov repeated these proposals, adding that "... we have repeatedly stated to our allies that the USSR cannot consider the Montreux Convention correct."

Then the problem was discussed with the participation of Stalin himself, who refuted the thesis about the threat of Turkey from the USSR. Noticing that “the Turks in the region of Constantinople have more than 20 divisions, perhaps 23 or 24 divisions. And, owning the Straits, a small state, supported by England, holds a large state by the throat and does not allow it to pass. ”

Britain and the United States vigorously stood up for Turkey and for the Montreux Convention. But under pressure from the USSR, and taking into account the pro-Soviet position on this issue of Greece, adjacent to the straits, section XVI “Black Sea Straits” of the final conference protocol said: “The Convention on the Straits concluded in Montreux should be revised as not meeting the conditions of the present. We agreed that, as a next step, this issue will be the subject of direct negotiations between each of the three Governments and the Turkish Government. ”

But Moscow decided to independently “press” Ankara. 7 August 1946, the government of the USSR issued a note in which the above-mentioned requirements were repeated. However, this time unequivocal support for Turkey was expressed by the United States and the United Kingdom. Already at the end of the 1940s in Turkey, including in some of its Black Sea regions, the US military and intelligence bases appeared, and in February, 1952, Turkey and Greece joined NATO. Thus, the NATO Navy in the Black Sea received a blank check. Moreover, the Montreux Convention, we repeat, does not preclude the presence of "non-Black Sea" Navy in this basin.

And on May 30, the Soviet government officially refused the Stalinist demands, and in the future, the USSR never raised the issue of the straits regime. Even during the Caribbean crisis (October 1953). In Moscow, they feared to repeatedly “put pressure” on Ankara, which could provoke an increase in the US military presence and, in general, NATO in the Black Sea region. At the same time, according to the available data, NATO, including Turkey, in the 1962's - 1960's. at least 1980 once violated the Montreux Convention military conditions. There is a version that NATO naval intelligence has a hand - again through the straits - to destroy the battleship Novorossiysk in 30 near Sevastopol ...

During the preparation and holding of the Helsinki Conference on Security and Cooperation in Europe (early-mid 1970-x), the United States, the United Kingdom and Turkey made it clear that they are not inclined to change anything in the Convention and that a return to this issue may postpone the signing of the final Act . Moscow chose not to lengthen these terms. And in 1991-1992. The Russian Federation, Ukraine and Georgia joined the USSR instead of the Convention.

Today it is obvious that the Montreux Convention, while retaining the possibilities for direct and indirect military-political provocations against Russia, is quite convenient for the West.

Moreover, with the current openly hostile relations of the Kiev junta to Russia, as was the case, say, during the period of Georgia’s armed conflict with Russia in 2008. Therefore, it is hardly possible for the countries-signatories of the Montreux Convention to create, for example, a commission to verify the implementation of all the rules of this document or to clarify them.

By the way, the USSR in the second half of 1940-x - the beginning of 1950-x repeatedly offered to create such a commission. The idea was supported by Bulgaria, Yugoslavia, Romania, Greece. Western countries and Turkey did not respond to such proposals. But if the provisions of this Convention can be violated even by non-Black Sea countries, and without consequences, then Russia will have to look for symmetrical answers. And do not appeal more to the Montreux Convention, which is not respected by other signatory countries, located, we note, far away from the Black Sea ...

Ctrl Enter
Noticed oshЫbku Highlight text and press. Ctrl + Enter
We are
Can Turkey close the straits: the word to the sea wolvesA great interview with Sergey Lavrov: about Ukraine, Obama and Iran
Military Reviewin Yandex News
Military Reviewin Google News
113 comments
Information
Dear reader, to leave comments on the publication, you must sign in.