Half a year without Saakashvili: where do Georgian dreams lead 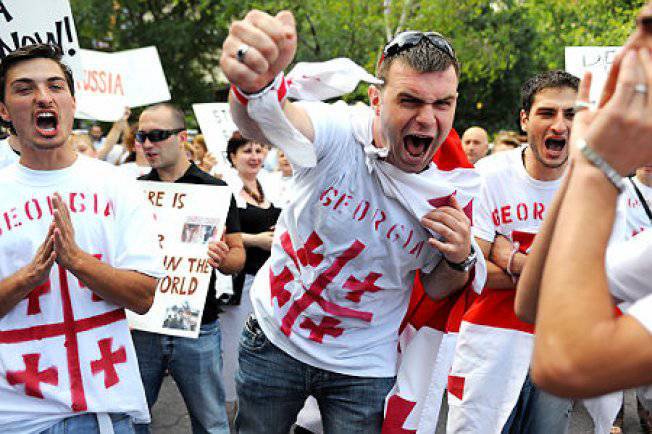 Six months have passed since the election of the philosopher George Margvelashvili as the President of Georgia. The timeframe is quite sufficient to understand whether it was possible to realize the “Georgian dream” in life and come closer to building the Platonic ideal state on Georgian lands. Therefore, it’s time to sum up the interim results of the six-month rule of the new Georgian authorities and understand where the country is heading.

First of all, deal with predecessors

Abused Saakashvili was overthrown by the whole of Georgia, and the citizens' hope was for rapid changes in the country. However, nothing significant happened to Georgia during all this time - what serious changes could there be in a country under external control?

First of all, the new authorities began to fight with their predecessors, etching them from all levels of the power vertical.

The chief security official of the times of Saakashvili, Vano Merabishvili, charged under three articles, went to the colony on 5 for years. Mikhail Saakashvili himself was called for interrogation, however, now he is inaccessible to the Georgian investigation - helping the provisional Ukrainian government to remain without part of the land and citizens. So what is it, and in this he is a great specialist.

Political analysts predict the likely arrest of the former head of the Georgian Security Council Gigi Bokeria, he was questioned on April 5 in a case of misappropriation of funds. The same is likely waiting for the mayor of Tbilisi, Gigu Ugulava. And this is by no means all the officials of the times of Saakashvili who have come under investigation.

And while the “Georgian Dream”, through law enforcement, is dealing with the “United National Movement” (UNM), the former party members of Saakashvili have hit the power from the rear.

The seemingly monolithic "Georgian Dream" after Bidzina Ivanishvili left politics began to split. So, the cat ran between the president with curtailed powers Georgy Margvelashvili and changer Ivanishvili as head of government Irakli Garibashvili.

For the first time, the president began to express dissatisfaction with the need to move to a presidential residence rebuilt by Saakashvili, popularly referred to as the “Palace of Caligula”. In the end, it was necessary to enter it.

Then a conflict arose on the basis of the separation of powers: the deputies decided to deprive Margvelashvili of the right to grant citizenship. Further removal of authority from the president risks turning him into a purely ceremonial head of state.

But the problems did not end there: Ivanishvili publicly expressed dissatisfaction with the appointment of Margvelashvili. The fact is that Vano Machavariani (brother of the former Vice-Speaker Mikhail Machavariani, one of the leaders of the opposition UNM), became adviser to the president on political issues. Ivanishvili lamented: “The point is not in kinship, but in the fact that this adviser is the bearer of the ideology of the“ nationals ”, and this manifested itself for a long time.”

As a result, Bidzina Ivanishvili, on the air of Georgian TV, stated the futility of relations with the president: “Margvelashvili has changed a lot. This is not the person I knew before the presidential election. I am disappointed. We often argued with him, did not agree with each other, but now the best thing I could do was to stop communicating. ”

Thus, UNM party members found an approach to the Georgian president and, playing on his discontent, exacerbated the power conflict. Meanwhile, Georgia’s economy is like a dying patient.

The patient is still alive, but ...

Since the time of Saakashvili, Georgia has tightly settled on a credit needle, and now the total amount of debt owed to international creditors is equal to the country's GDP. The republic should pay the creditors over 13,6 billion dollars in aggregate. For the time being, Georgia is able to pay its debts, but after August (it is planned to sign an association agreement with the EU in August) it will be problematic to pay off debts. And despite the fact that 70% of the population of Georgia in the 2012 year, called themselves not employed.

In the meantime, the Russian Federation has given the republic's economy a few deep breaths, allowing the supply of wines, fruits and mineral waters. It is clear that Moscow will accept the capitulation of Georgia to the European commodity producer without enthusiasm and the trade turnover of the countries will fall again, which will be an additional blow to the “Georgian Dream”.

Shadow of the Ukrainian Maidan

Over Georgia, it seems, hung the shadow of the Ukrainian euromaidan. Georgian political technologists and revolutionaries have nothing more to do in Kiev, and now they are returning to Georgia, but not alone, but in the company of their Ukrainian colleagues in the revolutionary workshop.

Georgian Interior Minister Alexander Chikaidze said that representatives of the party of former President Mikhail Saakashvili’s United National Movement and activists of the Ukrainian Euromaidan plan to destabilize the situation in the country in order to change power. “Our opponents brought activists of the Ukrainian euromaidan to Georgia, with whom they conduct trainings and preparatory work for the action. They (UNM) are also hiding behind several non-governmental organizations that are actively working to bring people to the streets and carry out a coup, ”says Chikaidze.

The UNM, of course, denies any involvement in the above, and the Prime Minister states that he will not allow destabilization of the situation in the republic. However, to destabilize the situation, the actions of the Georgian Dream functionaries, intending to sign an association with the EU, will be enough.

Georgia on the NATO bench

The failure of the new Georgian authorities and the foreign policy field. Suddenly, it turned out for Georgian politicians that Georgia does not need NATO, and no one in the organization is waiting for the republic. However, the NATO leadership thanked Tbilisi for supplying soldiers to the alliance’s hot spots, calling Georgia a “security exporter” and “exemplary model for post-Soviet states.” And the truth is that Georgia is, in fact, an exemplary model of a state completely under the control of the West.

Georgia is not expecting anything good in the near future. "Fuel" is enough for an analogue of the Ukrainian euromaidan, and the organizers have completely enriched themselves in Kiev with new experience. And the degradation of the economy after the entry into force of the association agreement with the EU will create a favorable background for a social explosion.

It is not yet clear whether the order will be received by the Georgian revolutionaries to take the tires to the center of Tbilisi, but in any case the authorities of the country should think about fundamental changes in foreign and domestic policy. However, any unauthorized movements of Georgian politicians will lead to the fact that their career will end quickly after a call from overseas.

And Russia will once again be forced to prepare for the possible extinguishing of the revolutionary fire in Georgia, because the Ukrainian events are only the beginning of the collapse of the post-Soviet limit-countries.

Ctrl Enter
Noticed oshЫbku Highlight text and press. Ctrl + Enter
We are
Nino Burjanadze: "I am not for the West and not for Russia. I am for Georgia"Nikolay Silaev, Andrei Sushentsov: Georgia after the elections and prospects for Russian-Georgian relations
Military Reviewin Yandex News
Military Reviewin Google News
49 comments
Information
Dear reader, to leave comments on the publication, you must sign in.