Media on US foreign policy. Is it too late to return to Asia? 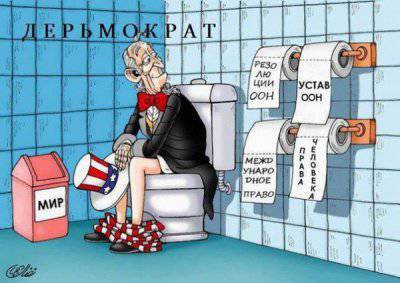 If talk about the collapse of the world hegemony of the United States, 10 years ago sounded marginal, today, even well-known American politicians are not ashamed to say that the United States has lost its “reputation as a world leader”.


The latest events on the world stage are very reminiscent of a chess tournament, in which a clear leader overestimated his opportunities and fell for all the "forks" of the opponent at once. This happens when you play too many games at the same time. Like Ostap Bender at a chess tournament in Vasyuki.

Another front from which the “world gendarme” today, apparently, is retreating, is Asia.

Since the second half of the 20th century, the Americans worked well in the region: they controlled island states, restrained China and prevented its rapprochement with the USSR.

Since the beginning of the XXI century, the States became somehow not up to Asia. After the withdrawal of troops from Iraq, Obama declared the Asian direction a priority in foreign policy, but the statement, according to the Financial Times journalist, "was perceived in Beijing - not entirely groundless - as a poorly veiled US attempt to strengthen military alliances with China’s neighbors."

Thus, instead of “shifting to Asia”, we see the separation of Asia from the United States. Influence in the Asian region has obviously weakened. Here and the rise of China as a “regional power”, corresponding to the main trend of world politics, with all signs of a sovereign player. And noticeably cooled relations with the former close allies - Japan and South Korea.

These phenomena are interrelated. Relations with allies are deteriorating - China is getting out of control. And vice versa: China’s control is softened — the allies no longer trust you as the guarantor of security in the region.

Well, and then - inevitable rapprochement between China and Russia, which in America were so afraid and tried not to allow the whole XX century.

The topic of losing China and its rapprochement with Russia (especially in the light of recent events in Ukraine) is one of the most discussed in the Western press. Analysts do not hesitate to call this puncture "the main strategic mistake" of recent years. The National Interest material states that Obama's “clumsy diplomacy” buries everything valuable in the most important geostrategic direction and “restores two leading powers against themselves at the same time”.

Indeed, as a result of the Ukrainian crisis and the return of the Crimea, all masks were dropped not only in the relations between Moscow and Washington, but also in the relations between Beijing and Washington and Beijing and Moscow. And the rash actions of the United States in this subtle situation only aggravate the situation and “push Russia and China towards each other, forcing them to forget about their differences for a while.”

“Washington’s relations with Beijing have also recently become much more tense. This is evidenced by the recent visit of US Secretary of Defense Chuck Hagel to China. The series’s rather harsh remarks culminated in a sharp warning to China’s Minister of Defense Chan Wanquan that attempts to “contain” China would never succeed, ”writes a columnist.

“Even the tone of statements by American diplomacy against Russia and China is sometimes unreasonably rude and aggressive. Representatives of the Obama administration have repeatedly demonstrated outbursts of irritation due to the fact that Beijing and Moscow dared to resist US attempts to dislodge Syrian leader Bashar al-Assad and impose tough economic sanctions against Iran. National Security Advisor Susan Rice, who was the US ambassador to the UN at the time, condemned the veto of Russia and China at the UN Security Council on voting on the Syrian resolution, saying that her country experienced “disgust” and added that such actions are “ shameful "and" unforgivable. " Of course, her statement caused a sharp reaction from Moscow and Beijing, ”he adds.

In recent years, China, participating in solving international issues, has acted cautiously and pragmatically, taking a neutral position whenever possible. But in some situations, neutrality instead of loyalty to the US position automatically means support for Moscow.

The IRNA publication writes about this: “Although the Chinese leadership has so far officially refrained from expressing its support for one of the parties to the conflict in Ukraine and calls them all to a peaceful solution to the problem, Beijing’s position as a whole demonstrates support for Moscow. Since the beginning of the confrontation between Russia and the West in connection with the events in Ukraine, the Chinese media and its non-governmental circles have taken a pro-Russian position.

Even on the eve of the referendum that had caused so much controversy in the Crimea, an article in the English-speaking newspaper Global Times, the press organ of the Chinese Communist Party, published an article calling on the official authorities of the republic to support Moscow’s policy.

Unlike Western leaders, the chairman of the People's Republic of China took part in the opening ceremony of the Winter Olympic Games in Sochi against the background of the growing conflict between Russia and the West in Ukraine. In his speech, Xi Jinping repeatedly noted the special, close relations between Russia and China, as well as the importance of cooperation between the two countries. ”

The importance of cooperation between Russia and China was also noted by Foreign Minister Sergey Lavrov on the eve of his recent visit to the PRC. And April 17 and Russian President Vladimir Putin himself, answering the question of director Karen Shakhnazarov, sounded the basic principles of Russian-Chinese relations: “Relations with China are very successful, at an unprecedented level. Military and political. This also applies to general approaches to assessing the international situation and ensuring security in the world. We are natural neighbors and allies. ” The trade turnover with China is 87 billion dollars, and it is constantly growing.

Words about the expansion of cooperation and the growth of commodity turnover are also confirmed in the sphere of trade and production of energy resources, the need for which in China last year grew by a quarter.

Thus, the loss of control over China closer to Russia is a serious problem of American foreign policy. Will the current government pull her decision?

A month ago, Michelle Obama was visiting China, playing ping-pong, drawing hieroglyphs, and probably probing the situation. This week, the US president himself went on a trip to Asian countries. However, a visit to China in the framework of this trip is not planned. Apparently, it is no longer possible to restore the status quo in the region through direct contact with an independent China.

Ctrl Enter
Noticed oshЫbku Highlight text and press. Ctrl + Enter
We are
A great interview with Sergey Lavrov: about Ukraine, Obama and IranThe West without the USSR: the world goes to an ideological explosion
Military Reviewin Yandex News
Military Reviewin Google News
26 comments
Information
Dear reader, to leave comments on the publication, you must sign in.