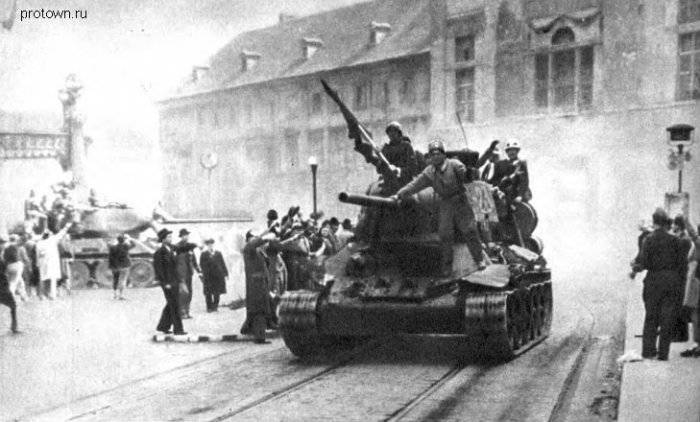 The last strategic operation that the Red Army conducted in the Great Patriotic War was the Prague Offensive Operation (5-12 in May 1945), during which the capital of Czechoslovakia, the ancient city of Prague, was liberated and the last major group of the Wehrmacht, the Army Group Center, was defeated .

After the enemy was defeated in the Berlin direction and the Berlin garrison surrendered on May 2, the only Wehrmacht force that could still resist the Red Army was the Army Group “Center” (commander Field Marshal Ferdinand Schörner) in Czechoslovakia and part of the Army Group “Austria” (commander Lothar Rendulich). Schörner, after encircling Berlin, received an order from Hitler to withdraw troops to the area of ​​the capital of Czechoslovakia and turn Prague into a "second Berlin." Rendulich also refused to capitulate and withdraw troops to the west. Schörner had up to a million people, about 10 thousand guns, about 1900 tanks and 1000 aircraft.

The units of the 2 of the Ukrainian Front (Marshal R. Ya. Malinovsky) and the 4 of the Ukrainian Front (Army General A.I. Eremenko) fought against this grouping, having completed the liberation of Slovakia, liberated the territory of the Czech Republic. From the north there were units of the 1 of the Ukrainian Front, most of its troops were in the area of ​​Berlin at the beginning of May, the remaining units occupied defenses at the front of 400 km in the foothills of the Ore Mountains and the Sudetenland. From the west to the border of the Czech Republic, the 3-I American Army (General D. Patton) was moving, it had the task of taking the border of České Budějovice, Pilsen, Karlovy Vary agreed in advance with the Soviet command. 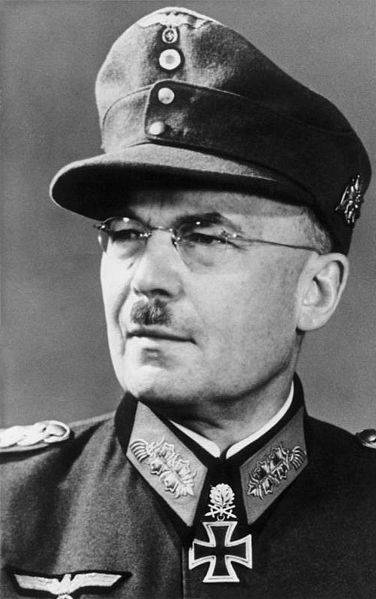 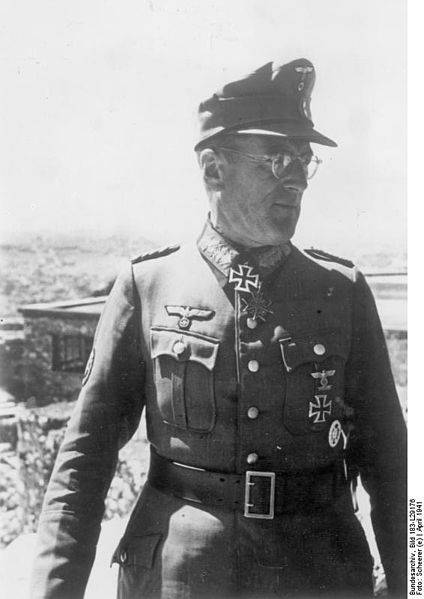 Start of operation in Czechoslovakia

With the defeat of Germany in Czechoslovakia, local resistance, which had been very imperceptible, had intensified. In April, approximately 120 partisan detachments were operating, although their total number was small - 7,5 thousand people. There was no single leading center, constant communication with the Soviet command, the activity was defensive in nature. At the end of April, the Czech National Council (CNS) was created; it consisted of representatives of various political forces, headed by Professor at Prague University A. Prazhak. The CNS did not intend to start an uprising immediately, as there were no serious forces for this.

But 5, in May, a popular uprising began in Prague; it was prepared by the former military of the Czechoslovak army led by General K. Kutyavasr (Bartosz organization). In early May, they came into contact with the Russian Liberation Army (ROA), with the commander of the 1 division, General S. K. Bunyachenko. ROA went west, hoping to surrender to the Americans, Bunyachenko and his commanders relied on political asylum in Czechoslovakia and 4 agreed to support the uprising. Vlasov did not believe in success, but did not interfere. But already on the night of the 8, most of the Vlasovites began to leave Prague, and without receiving guarantees of their allied status. Schörner was forced to withdraw troops to Prague in order to suppress the uprising. 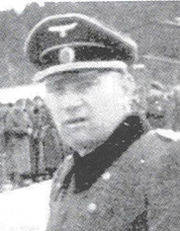 On May 1, I. S. Konev received an order before May 4 to transfer the line along the Elbe River to the 1 of the Belorussian Front, and to transfer the liberated forces to the Prague direction. The regrouping of forces and preparation for the strike began. From the air, the front was supported by the 2-I air army, the 6-I army (Lieutenant-General V. A. Gluzdovsky) surrounded the garrison of Breslau. He was supported by the 4-th Ukrainian and 2-th Ukrainian fronts.

At the beginning of the operation, 3 Ukrainian fronts had: 20 combined-arms armies (including two Romanian and one Polish army), 3 tank armies and 3 air armies, one horse-mechanized group, 5 tank, 1 mechanized and one cavalry separate corps . Their total number was more than 2 million people with about 30,5 thousand guns and mortars, up to 2 thousand tanks and self-propelled gun mounts, 3 thousand aircraft. Our forces exceeded the enemy in manpower almost twice, in aviation and artillery in three, in armored forces were almost equal. 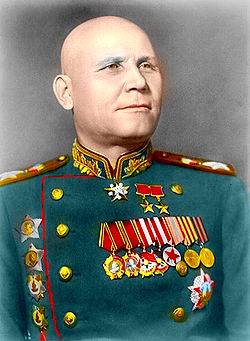 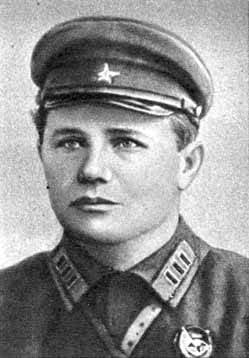 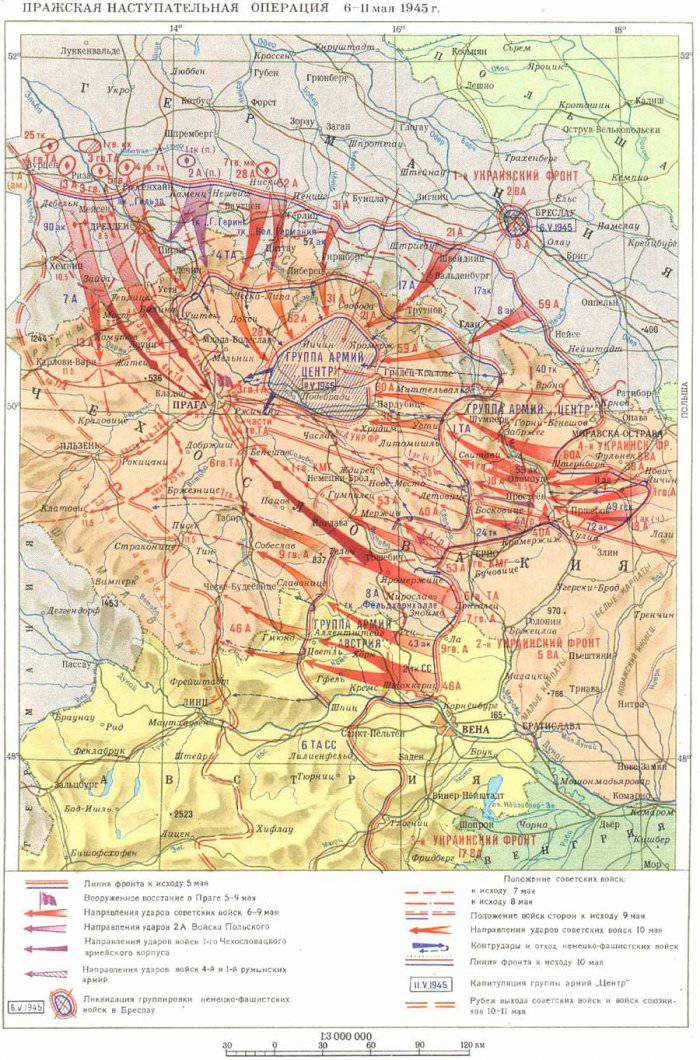 The strike was planned for 7, but events in Prague forced to strike earlier, without completing the regrouping of forces. The rebels were able to capture most of the city, seizing rocks with weapons, disarming several small parts of the enemy. Field Marshal ordered the uprising to be crushed, as the rebels blocked the exit routes to the west. The Wehrmacht 6 captured most of the city, using artillery, aircraft and tanks, on the same day the Bunyachenko division acted on the side of the Czechs. Russian soldiers of the ROA knocked out the Wehrmacht from the western part of the city. The 7 part of the ROA crossed the Vltava river and divided the Wehrmacht positions into two parts. But after some hesitation, the CNS thanked the Vlasovites and refused to help. Bunyachenko was ready to stay if the Czechs at least broadcast a message about the reasons for joining the Wehrmacht, about their actions now, about their readiness to continue to fight the Nazis, but the Czechs refused. In the evening, the 7 of the ROA began to depart to the west, only part of the fighters remained with the Czechs. After the departure of the division, ROA Wehrmacht again became the master of the situation in the city.

Therefore, Marshal Konev gave the order to speak in the morning of 6. Through the Ore Mountains, the 13-th, 3-i Guards armies advanced along with the 25-m and 4-m Guards tank corps, as well as the units of the 3-th and 4-th Guards tank armies. By the evening, the 5-I Guards Army also joined them. This was a feature of the Prague offensive operation - the simultaneous introduction of combined-arms and tank armies in the offensive zone. On the same day, the German group in Breslau capitulated. On May 7, the most successful offensive 4-I Guards Tank and 13-I armies reached the northern slopes of the mountains, units of the 3-I Guards Tank and 5-th Guards combined armies began fighting for Dresden.

7 th hit and 4-th Ukrainian Front, 7-I Guards Army with the move broke through the defense of the enemy, 8-th in a breakthrough introduced 6-th Guards Tank Army, which was advancing on Prague.

The position of the rebels in Prague deteriorated, the Wehrmacht ruthlessly suppressed resistance, advanced to the center of the city, part of the rebels, panicked, threw down defenses. The rebels had a shortage weapons and ammunition. In the afternoon of May 7, Schörner received an order from Keitel to surrender, but did not bring him to the troops, on the contrary, he ordered that his resistance be tightened. On the same day, American officers arrived at the headquarters of the rebels. They reported on the surrender of Germany and advised to stop the battle in Prague. Negotiations began with the head of the German garrison - R. Toussaint, he agreed to surrender heavy weapons when leaving the city, if the Germans were not prevented from withdrawing troops. 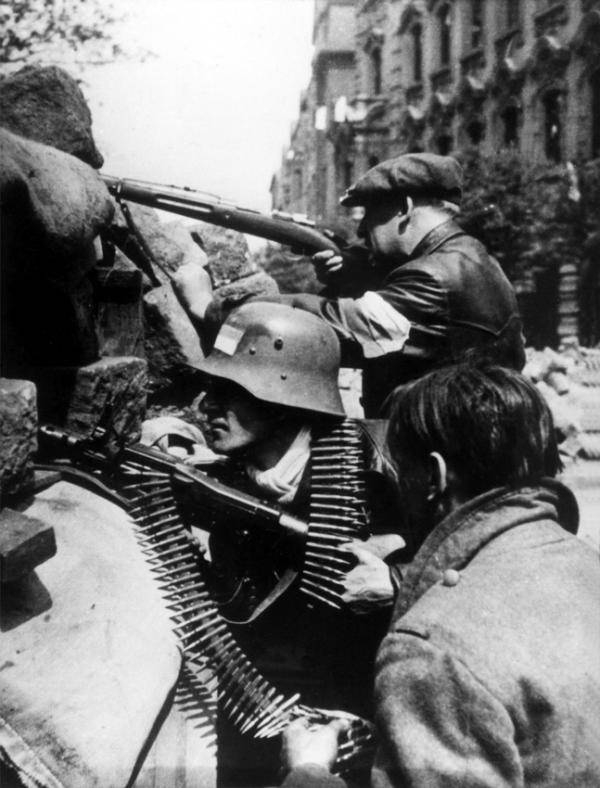 The 8 of the 4 of the Ukrainian Front seized the city of Olomouc and launched an offensive against Prague; 1 Ukrainian entered Czechoslovakia, the 4-th Guards Tank Army units destroyed Schörner's headquarters, depriving the Army Group Center to coordinate. 5-th Guards Army captured Dresden by the end of May 8, on the same day several more cities were liberated.

The Czechs gladly greeted the Soviet soldiers, many decorated houses, squares with red flags, invited them to their homes, gave flowers, expressed their joy in every possible way.

In the evening of the 8, the Soviet command proposed to the Wehrmacht to capitulate, but there was no answer. The Germans wanted to surrender to the Americans and accelerated the retreat. On the night of the 9-th Soviet tank units (4-I and 3-I Guards tank armies) made a 90-km throw, and in the morning the first tanks entered Prague. They were taken to the city and other units - the 302-I Rifle Division (Colonel A. Ya. Klimenko) on motor vehicles, the 1-I Czechoslovak Tank Brigade from the 60 Army and the advance detachment of the 38-I Army Mobile Group, Colonel-General K. S. Moskalenko. At lunch from the south, units of the 2 of the Ukrainian Front entered the city: the 6-I Guards Tank Army and the infantry of the 24-rd infantry corps, and later the 7-th mechanized corps. With the support of the inhabitants of Prague, the Soviet units "cleared out" the city from the Nazis. The retreat routes of the Army Group Center to the west and south were cut, only a few divisions were out of encirclement, most of the German forces were in the “boiler” east of Prague. 10, our units met with the Americans, 10-11 in May, the Germans capitulated, so the last strong Wehrmacht grouping ended the war. Shooting continued in the vicinity of Prague until the 12 number. 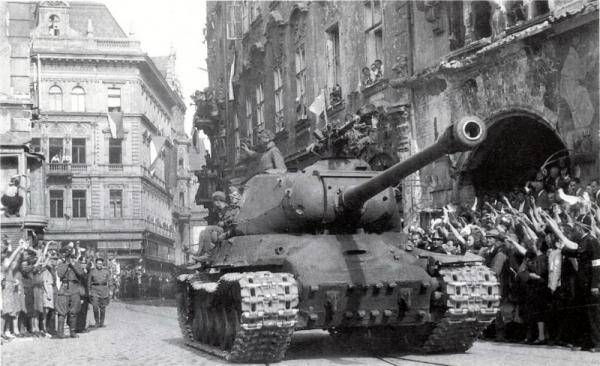 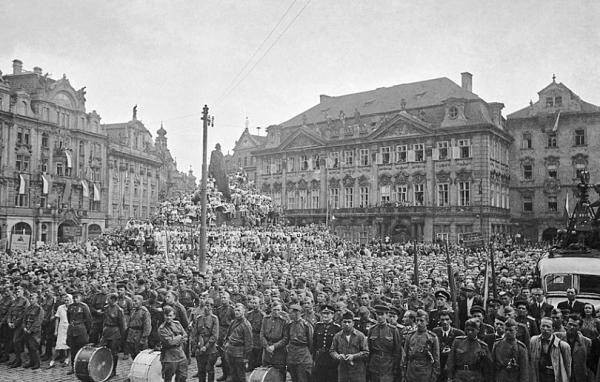 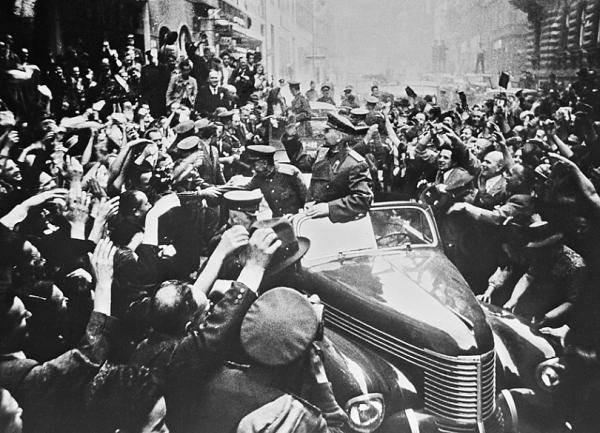 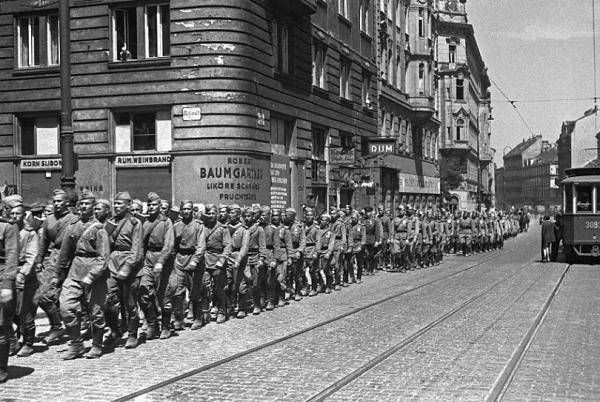 - Approximately 860 thousand people were taken prisoner, about 40 thousand fell in battles and were wounded. A large number of equipment and weapons were captured: 9,5 thousand guns and mortars, 1,8 thousand tanks and assault guns, and so on. Our losses: approximately 12 thousand. Killed and missing, injured and sick about 40 thousand. During the liberation of the city itself about a thousand Red Army soldiers were killed.

- In total, for the liberation of all Czechoslovakia, the Red Army paid the “price” at 140 for thousands of soldiers killed.

- The Prague offensive operation once again demonstrated to the world the high skill of the Red Army and its commanders, the defense was broken in the shortest possible time, and significant enemy forces were surrounded and captured. In the Great Patriotic War was put the winning point. The medal "For the Liberation of Prague" was awarded 390 thousand people.

- The Americans did not let the Vlasovs into their zone, some of them, having learned about it, shot themselves. Most surrendered to Soviet units. Vlasov and other leaders of the ROA waited in Moscow court. 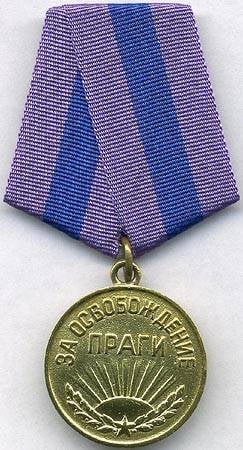 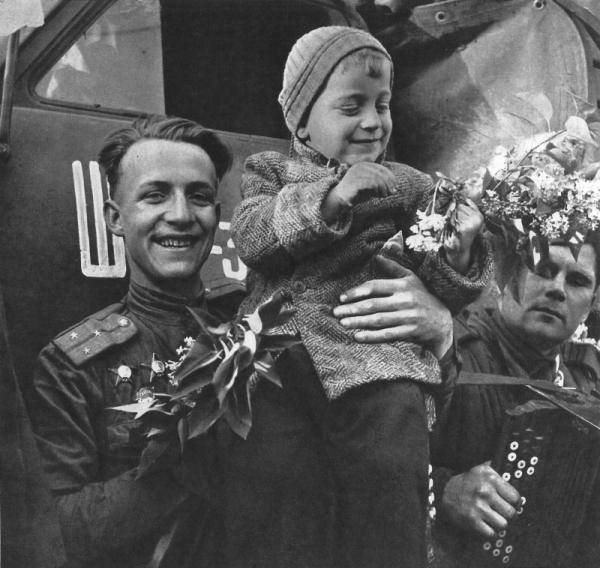