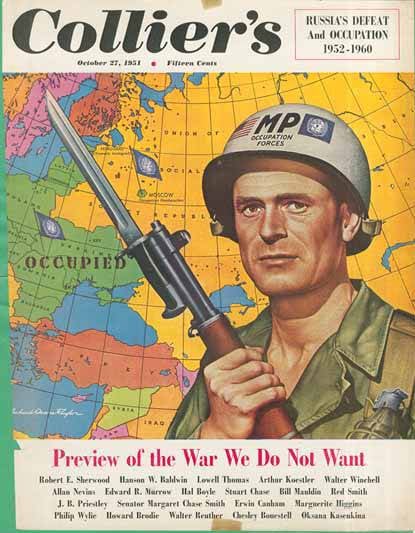 During the last century, the Anglo-Saxon empire rests on propaganda. With its help, we were convinced that the United States is a country of freedom and democracy, and that if they enter a war, they do it solely to defend their ideals. But the crisis that broke out in Ukraine changed the rules of the game, and from now on, the voice of not only Washington and its allies is heard all over the world. Their lies are openly refuted by the government and the press of another state, Russia. In the age of satellite television and the Internet, Anglo-Saxon propaganda no longer works.

Always the rulers are trying to convince the people of the justice of their actions, because no one will ever follow those whom they consider to be villains. The twentieth century has become the scene of new propaganda methods that are not too burdened with truth. In the West, they want to attribute the invention of modern propaganda to the Nazi Minister Joseph Goebbels. However, in fact, the art of distorting perception was invented by the Anglo-Saxons and much earlier.

In 1916, the United Kingdom created Wellington House in London, and then Crewe House. At the same time, the United States sets up a committee on Public Information (CPI). Proceeding from the fact that in the First World War, it was not the armies, but the nations that collided, these organizations tried to fool their own people, the peoples of their allies and the peoples of their opponents.

The beginning of modern propaganda was laid with the publication in London of the Bryce report on German war crimes. It has been translated into thirty languages. According to this document, German soldiers raped thousands of women in Belgium, and the British soldiers, therefore, fought against barbarism. At the end of World War I, it turned out that the report was completely falsified because it was based on false testimonies presented by journalists.

In turn, in the United States, George Creel invented the myth that world war was a crusade of democratic countries that defended the right of humanity to a peaceful life.

Historians have shown that the causes of the First World War were both immediate and deep, and the most important of them was the rivalry between the great powers to expand their colonial empires.

The British and American organizations were secret structures that worked for their states. In contrast to Leninist propaganda, which sought to convey the truth to the illiterate population, the Anglo-Saxons tried to deceive their people so that they could more easily manipulate. For this state Anglo-Saxon organizations were forced to hide and work under false signs.

After the destruction of the Soviet Union, the United States ignored propaganda and preferred public relations to it. Now you don’t have to lie, you just have to hold journalists by the hand and show them where they should look. During the Kosovo war, NATO commissioned British Prime Minister Alistair Campbell’s adviser to speak daily at press conferences. While journalists wrote about them, the Alliance could "peacefully" carry out bombing raids. The so-called story telling method is aimed not so much at lying as at distracting attention.

However, the story telling method came into full force only after 11 September, when it was necessary to focus public attention on the terrorist attacks in New York, so that no one would notice a military coup d'état organized on that day - the transfer of executive power from President Bush to the military junta and the conclusion of all parliamentarians under surveillance. By the way, Benjamin Rhodes, the current adviser of Barack Obama, took part in this operation.

In recent years, the White House, along with its allies (the United Kingdom, Australia and, of course, Israel) introduced this system to mislead public opinion. Every day, the governments of these countries received instructions and even written speeches from the World Information Bureau in order to justify the Iraq war and slander Iran.

The fastest spread of his lies, Washington from 1989 of the year laid primarily on CNN. In addition, the United States has created a real cartel of satellite information channels (Al-Arabiya, Al-Jazeera, BBC, CNN, France 24, Sky). In 2011, during the bombing of Libya, NATO managed to convince the Libyans that they had lost the war and was useless to resist. However, in 2012, NATO failed to reproduce this model and convince the Syrians that their government would inevitably fall. This ruse failed because the Syrians knew about the machinations carried out by international television channels in Libya, and they were able to prepare for it. And this failure itself marks the end of the hegemony of this information cartel.

The crisis that has arisen between Washington and Moscow over Ukraine is forcing the Obama administration to reconsider its system. After all, from now on Washington is not the only one who can broadcast to the whole world, he is forced to justify himself to the government and the Russian media, which are available worldwide via satellite channels and the Internet. Secretary of State John Kerry has therefore appointed a new propaganda deputy in the person of the former editor of Time Magazine Richard Stengel. Although he took the oath of 15 on April, he held this post on March 5 and managed to send the most well-known media a “newsletter” with 10 denials regarding Vladimir Putin’s statements on Ukraine. 13 April, he sent the second such bulletin with the next 10 denials.

Reading this scribbling, most of all you are amazed at its absurdity. It aims to ensure that all media justify the official version of the revolution in Kiev and refute Russian statements about the presence of the Nazis in the new government. However, today everyone knows that instead of the revolution in Kiev, there was a coup d’etat, planned by NATO and carried out by Poland and Israel by mixing recipes of “color revolutions” and “Arab spring”. The journalists who received these bulletins and rejected them are well aware of the telephone records of Assistant Secretary of State Victoria Nuland about how Washington should change the regime in Kiev in spite of the opinion of the European Union and Estonian Foreign Minister Urmas Paetsa, and about the true identity of the snipers on Maidan. In addition, according to the Polish newspaper Nie, it became known that two months before the events on the Maidan, the Nazi rebels were trained in the Polish Police Academy. As for the denial of the Nazis in the new Ukrainian government, it is the same as to say that at night it is brighter than during the day. It is not necessary, they say, to go to Kiev to make sure of this; it is enough to read the statements of the ministers or listen to their speeches.

In the end, although these arguments create some illusion of consensus of the main media of the countries of the Atlantic alliance, they have no chance to impose false opinions on curious citizens. On the other hand, it is very simple to uncover a lie with the help of the Internet, and this cannot but undermine the credibility of Washington.

The consensus of the atlantist media on September 11 allowed a distorted version of events to be imposed on international public opinion, but the work done by many journalists and ordinary citizens, and I was the first among them, showed the impossibility of implementing the official version. Thirteen years later, hundreds of millions of people realized this lie. And this process will continue, despite the new mechanism of American propaganda. As a result, all those who will use the arguments of the White House, in particular, the governments and mass media of the NATO countries, will undermine their credibility.

Barack Obama and Benjamin Rhodes, John Kerry and Richard Stengel only work today. Their propaganda acts for only a few weeks and leads to an increase in outrage, after people realize that they are being manipulated. Inevitably they become imbued with distrust of the institutions of power of the NATO countries, which deliberately misinform them. They forgot that the propaganda of the twentieth century achieved success only because the world was divided into blocks at war with each other, and the principles on which it is built are not compatible with new means of communication.